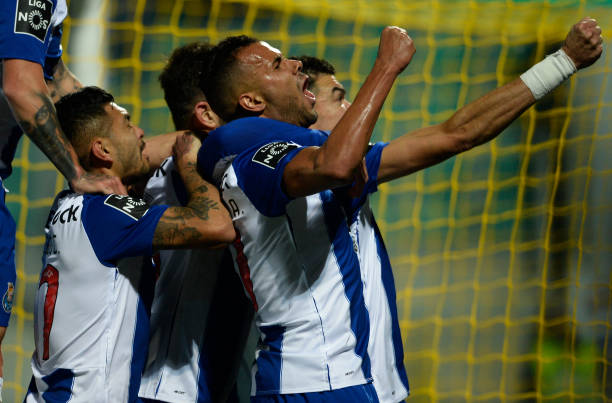 Sporting de Braga saw their hopes of a top-two Primeira Liga finish dashed after picking up a second consecutive defeat with a 2-0 loss at home to Belenenses. The Arsenalistas' defeat on Friday night came just hours before FC Porto’s comfortable 3-0 win away versus Tondela, opening up an eight-point-gap between first and third place.

Falling further behind were Sporting who, despite gaining ground on Braga in the race for a top-three finish, left Madeira disappointed with a 0-0 draw away to Marítimo, this Monday.

Benfica later brought Matchday 23 to a close with a 4-0 victory at home to 17th-placed Chaves, taking the Eagles seven points clear of third place and moving back to within a point of Porto. PortuGOAL has all the action from the top of the table.

In a game between two of the Primeira Liga’s brightest managerial prospects, Braga were out to bounce back from last week’s demise away to Sporting with an emblematic clash at home to Belenenses.

Dyego Sousa could and should have put his side in front as early as the 4th minute after seeing his close-range shot stopped by Muriel, meanwhile Belenenses’ Licá had a goal moments later chalked off by the VAR for an offside on Zakarya Bergdich, who had set the winger up for a simple tap-in.

The visitors turned to a short corner to unlock Braga in the 38th minute, forcing Tiago Sá into action to deny Vincent Sasso’s header before Kikas popped up to finish on the rebound.

Belenenses held onto their 1-0 lead going into half-time before being met with more goal joy on the hour-mark, with Licá getting his name on the score-sheet after powering a left-footed strike in at the near-post.

An acrobatic effort from Paulinho rattled the bar in the 85th minute, but Braga could offer little else in their quest to avert a 2-0 defeat at home to Belenenses.

Internal disciplinary measures saw Porto omit the highly-coveted Éder Militão from their XI, making way for Wilson Manafá at right back, as the Dragons looked to take maximum points from their trip to Tondela.

Pepe offered his side a sound start in the 11th minute, finishing first time on the turn to put the Dragons in front. Tondela looked to keep Iker Casillas busy in response, but the Spanish goalkeeper was up to the task and enabled Porto to hold onto their slender lead before the half-time break.

Héctor Herrera was on hand to kill the game off in the 73rd minute after a deflected Otávio cross left Tondela’s keeper scrambling and Yacine Brahimi, open at the back post, fed his captain who stroked in the third and secured a 3-0 victory for his team.

After their Europa League elimination at the hands of Villarreal last Thursday, Marcel Keizer’s Sporting switched their attentions to the league where a win could’ve placed them within a point of third-placed Braga, after the northerners’ loss to Belenenses.

Appearing somewhat uninspired, Bas Dost could have lightened Sporting’s night following Marcos Acuña’s low cross in his direction in the 23rd minute, but Charles between the sticks found himself well-positioned to deny the Dutchman’s tap-in.

The deadlocked extended itself into the second period, where Marítimo tried their hand at cracking it via Edgar Costa’s awkward volley from the left, saved by Renan Ribeiro prior to Getterson’s rebounded effort wide at the far post.

Bruno Fernandes tried to pull the strings, firstly in the 68th minute with a free-kick roaming just wide before a cross into the box in the 76th minute almost had Raphinha celebrating his first Liga goal in Sporting colours, as Charles parried the Brazilian’s effort wide.

Charles was the hero once again for Marítimo three minutes later when thwarting Bruno Fernandes from close range, moments before the Lions drew the game to a close with a second yellow card for Sebastian Coates - the Lions having a man sent off in 3 of thier last 4 matches - as the centre-back took his frustration out on the Marítimo goalkeeper in a tussle for the ball with play already stopped in the 93rd minute.

The goals took a bit of a break in Benfica’s 0-0 draw at home to Galatasaray, last Thursday, but there was a great opportunity to charge the numbers back up upon the reception of 17th-placed Chaves, currently three points from safety.

Bruno Lage’s men took the lead through Rafa Silva in the 19th minute, taking advantage of a pinball effect inside the Chaves area to fire a finish into the bottom corner.

João Félix emerged to prolong his fine form in front of goal in the 37th minute, feeding off a fruitful partnership with Haris Seferovic and smashing in goal number two on the rebound from his initial effort inside the box.

Seferovic grabbed his goal on the brink of half-time, with João Félix again involved in the build-up prior to Gabriel’s final ball into the Swiss striker, ghosting in behind the Chaves backline before squeezing a shot post António Filipe at the near post.

With opportunities drying up in the second period, Lage threw Jonas into the equation with little more than 20 minutes of the game to go, with the veteran getting his name on the end of the fourth and final goal to secure a 4-0 victory, setting the Eagles up nicely for their eagerly anticipated trip to the Estádio do Dragão, this Saturday.

What happened to this could be Braga's year? They're only 3 points ahead one of the poorest Sporting sides since 2012/2013... No excuse for Braga to be finishing 4th this year. Not even good enough to compete with Benfica and Porto who aren't...

What happened to this could be Braga's year? They're only 3 points ahead one of the poorest Sporting sides since 2012/2013... No excuse for Braga to be finishing 4th this year. Not even good enough to compete with Benfica and Porto who aren't even that strong this year. Can't believe there are people who honestly consider that Braga are an actual title contender, let's see what they have to offer today against Porto in the Taca De Portugal

Yet another excellent performance from Benfica. Gabriel was absolutely brilliant, and Florentino continues to ooze class with every performance. I know Samaris' form has improved since the arrival of Lage, but I actually think Florentino should...

Yet another excellent performance from Benfica. Gabriel was absolutely brilliant, and Florentino continues to ooze class with every performance. I know Samaris' form has improved since the arrival of Lage, but I actually think Florentino should get the start against Porto. Samaris is the far more mature experienced option, but I think Florentino -- despite his young age -- is better in all facets of defensive midfield play. His reading of the game is top-notch, he's a superb tackler. and he's neat and tidy in possession.

Jardel may be fit in time for Saturday's match, but he's been out for quite some time, so I'm not sure if he's ready to walk right into the most important match of the season. I'd personally go with Ferro over Samaris simply because he's a natural CB who has plenty of experience playing alongside Ruben Dias. He is also great in the air, which will certainly come in handy against Porto's extremely direct style of play which is largely dependent on long balls, crosses, and set-pieces.