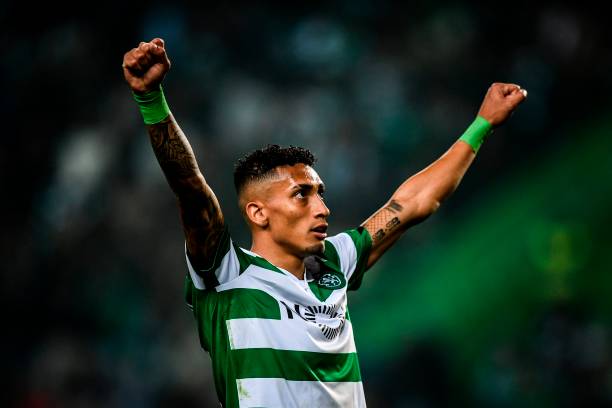 It’s ‘begin as you mean to go on’ for all four of the Primeira Liga’s top sides with wins across the board ahead of the final international break.

A sole goal from Raphinha was enough to turn Sporting’s home encounter versus Santa Clara into a 1-0 victory on Friday night, applying pressure on Sporting de Braga before their game against Vitória de Setúbal.

Abel Ferreira’s men replied to the Lions’ pursuit of third place with a 1-0 win, away from home, before being joined in triumph later on Saturday night by Porto in their 3-0 dissecting of Marítimo.

Benfica brought the action at the top to a close with 4-0 win away to high-flying Moreirense, this Sunday, leaving the Primeira Liga standings as you were for another week. PortuGOAL brings you all the action at the summit of the table.

The Green & Whites looked to build on their recent good run of results in the league with another victory at Alvalade, this time up against 8th-placed Santa Clara, as Bas Dost made his way back into Marcel Keizer’s XI alongside new signing Idrissa Doumbia.

After being limited to efforts from range throughout much of the first half, the Lisbon outfit took just one minute of the second period to ask greater questions of Santa Clara’s number one, Marco, with the keeper getting down well to push Raphinha’s strike inside the box past the post.

Santa Clara replied through on-loan signing Martin Chrien with a side-footed shot deep inside Renan Ribeiro’s box, denied only by a timely intervention from Stefan Ristovski to divert the trajectory of the ball.

Sporting unlocked Santa Clara with a quick Marcos Acuña throw-in to send Bruno Fernandes in on goal, with the midfielder able to then square a pass over to Raphinha for the first-time finish in the 57th minute.

Keizer’s men were able to lock up and protect a 1-0 lead through to full-time, taking them level on points with Braga before the ‘Arsenalistas’ took to the field.

Focus was on all three points from Abel Ferreira’s side after Sporting closed in on third place with a victory versus Santa Clara, beaming the attentions onto the Bonfim.

Fransérgio was inches away from turning in the first goal of the game in the 16th minute, arriving fractionally late to Murilo’s low cross into the box. In the 34th minute, it was Dyego Sousa’s turn to go close, firing against the post on the volley before Murilo popped up on the left-hand side to rebound in the game’s first goal.

Mano emerged as the biggest threat for the hosts, unleashing a fierce strike from range that Tiago Sá could only parry away in order to safeguard a 1-0 lead going into the break.

In the second half, Allef thought he had gone one better for Setúbal after adding the finishing touches to a whipped cross in the 66th minute, before realising it had been chalked off for offside.

A double save late on preserved Braga’s one-goal-advantage over Setúbal come full-time, reinstating the visitors’ three-point lead over Sporting in the Primeira Liga table.

VAR’s presence was felt early in Marítimo’s venture to the Estádio do Dragão, firstly to rectify an initial penalty awarded against the side from Madeira before leaving them down to 10 for a last-man challenge from Lucas Áfrico on Moussa Marega - all within the opening six minutes.

Marega could and should have made it 1-0 in the 24th minute after being picked out by a back-post cross from Otávio, with the Malian striker firing a first-time effort from close range against the side-netting.

Charles starred late in the half to delay the wait for the game’s first goal, denying Marega’s header before a top point-blank stop from Héctor Herrera’s powerful strike was pushed onto the woodwork, with Danilo Pereira’s disallowed goal concluding the move.

The Dragons’ fortunes changed in the second half after Gamboa’s handball inside the box offered them the chance to take the lead via the penalty spot, taken by Alex Telles in the 56th minute to go 1-0 up.

From a set-piece, Telles set up the second goal for Madrid-bound Éder Militão to head home in the 74th minute, taking Porto a step closer to first place.

Yacine Brahimi’s finish in the 88th minute, cutting in from the left before picking his spot, wrapped up all three points for Sérgio Conceição’s team, occupying top-spot prior to Benfica’s trip to Moreira de Conégos on Sunday.

The stakes were high for the Eagles coming into an away clash against surprise-package Moreirense, requiring a win to return back to first place.

Pizzi threatened early for Bruno Lage’s men, who, alongside Moreirense, saw goals chalked off for offside in the initial stages. João Félix cracked the code in another tight call in the 37th minute, running in behind before taking his chance one-on-one with the keeper.

Andreas Samaris doubled Benfica’s lead soon after with a strong header from a set-piece, taking a 2-0 lead into half-time. That advantage was extended by Rafa Silva in the 48th minute, getting just enough behind his chip on the keeper to set the title hopefuls three goals clear.

With the final honours falling to young Florentino Luis in the 83rd minute, converting the scraps from an Alex Grimaldo corner, Benfica turned four goals into three points and reclaimed top-spot in an air-tight race for the title.