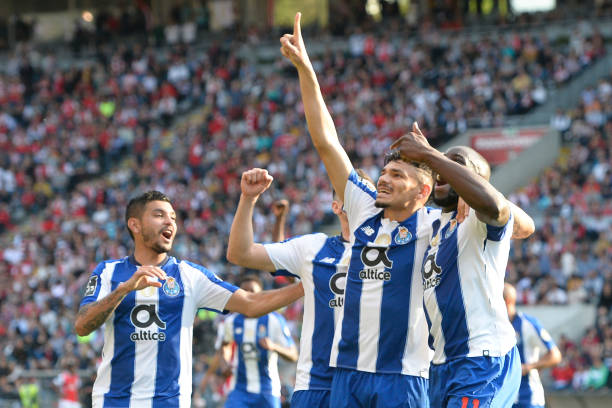 FC Porto were twice forced to come from a goal down to defeat Sporting de Braga 3-2 away, with goals from Tiquinho Soares and Alex Telles temporarily putting the Dragons top prior to Benfica’s win over Tondela, this Saturday.

Porto’s success over Braga enabled a route back into the top three for Sporting, who upon defeating relegation-threatened Chaves in Trás-os-Montes opened up a one-point-advantage over fourth place thanks to a 3-1 win.

Benfica followed suit in their late kick-off at home to lowly-placed Tondela, requiring a late Haris Seferovic goal to nick a 1-0 victory and reclaim top-spot after a few hours off the summit. PortuGOAL has all of the action at the top of the Primeira Liga upon its return from the international break.

It was second versus third at the Estádio Municipal de Braga as the hosts intensified their search for a first win against a so-called ‘BigThree’ side since September, whereas Porto kept their eyes firmly on recapturing first place.

Abel Ferreira’s side couldn’t have hoped for a better start, finding the back of the net inside the first five minutes through Wilson Eduardo’s tap-in that left Iker Casillas, overly-preoccupied with calling for offside, unable to stop a skewed finish.

Porto relied on a set-piece to cancel Braga’s earlier effort, finished off by Soares’ header inside the box in the 26th minute, to take the two sides into the break with a 1-1 draw.

Braga emerged to strike early for a second time through Murilo, emerging one-on-one with Casillas and taking advantage of a mix-up between the Spaniard and Éder Militão to take the ball around both and slot home a second goal two minutes after the interval.

Telles looked to force his way with a strike from range in the 60th minute, stopped by Tiago Sá, before a foul on Militão inside the box offered the Brazilian left-back the chance to equalise from the penalty spot in the 69th minute.

The Porto defender did just that when making it 2-2, subsequently collecting an injury that would deny him the chance to convert a second penalty for the Dragons, won just nine minutes later after Claudemir’s swipe on Fernando Andrade.

Instead, Soares took responsibility from the 12-yard mark to pull Porto ahead for the first time and grab himself a brace, as Sérgio Conceição’s men held onto their 3-2 lead to pick up three precious points in the hunt for the league title.

With third place on the line, Sporting were tasked with taking on point-hungry Chaves without top scorer Bas Dost, absent for a second consecutive game, as goalless Luiz Phellype led the line for the Lions.

The wait for a goal in green and white was over just 24 minutes into the game, however, as a neat combination down Sporting’s right enabled Stefan Ristovski the opportunity to fizz a low cross into Phellype, who only needed to turn the ball into an empty net to make all the difference in the first half.

Greater problems emerged for the hosts once Jefferson, already in the referee’s book for a foul on Bruno Fernandes in the first half, complicated matters further by picking up a second yellow for a late challenge on Nemanja Gudelj.

Chaves rallied around the decision, however, initially threatening Renan Ribeiro’s goal through Gastón Campi’s header onto the post before André Luis, via a fortunate spin off the uncovered turf, fired a shot past the goalkeeper to level the game on the hour mark.

As per usual, Bruno Fernandes emerged to bring solutions to Sporting’s table, meeting Marcos Acuña’s lagging cross to fire a first-time half-volley from the edge of the box into the bottom corner and place Marcel Keizer’s men 2-1 up.

Chaves almost found themselves reduced to nine men after a last-man challenge on Raphinha, with the VAR bringing the play back to a Ristovski foul on the follow-through that instead left the Lions down to ten with 11 minutes added time still to come.

Enough time for Phellype to rekindle his luck in front of goal and double his tally for the day with a finish under Ricardo Nunes with a minute to spare, moving Sporting a point above fourth-placed Braga with a 3-1 victory.

Against 16th-placed Tondela, only a win would suffice for Benfica in response to Porto’s earlier triumph away to Braga, as the Eagles trailed the Dragons by three points coming into this fixture at the Estádio da Luz.

With ten minutes on the clock, João Félix missed a great opportunity to make it 1-0 following André Almeida’s cross, failing to get good enough contact behind his outstretched leg to direct an effort on goal inside Tondela's box.

Rafa Silva was next in line in the 15th minute when racing in on goal from Andreas Samaris’ long ball over the top, denied only by Cláudio Ramos’ save to set the tone for a goalless half of football in Lisbon.

Much like Jhon Murillo before him, Jonas had a goal disallowed at the other end in the 50th minute after his finish inside the box succeeded André Almeida’s handball, spotted by the VAR, in Benfica’s recovery of possession.

Tondela’s António Xavier produced the second half’s best chance, among Benfica’s struggles to find a way through Pepa’s team, with a curling effort to make Odisseas Vlachodimos roll out an acrobatic stop in the 73rd minute.

The visitors’ steeliness at the back wouldn’t hold out for much longer, however, as Grimaldo’s cross in the 84th minute set Seferovic, coming on in the second half, for a low header into the back of the net.

Despite a late fright from Tondela’s Patrick Fernandes, Seferovic’s clutch moment was enough to earn Benfica all three points come full time, taking them back to the top of the Primeira Liga table and level on points with Porto.

Braga... two stupid ass penalties and a suspiciously clumsy corner that led to the first Porto goal, you gotta question if theres corruption or if Braga is just this stupid to throw away any challenge to the title.

Braga... two stupid ass penalties and a suspiciously clumsy corner that led to the first Porto goal, you gotta question if theres corruption or if Braga is just this stupid to throw away any challenge to the title.

I only caught the last 20 mins (from 70 min onwards) of the Sporting game, I had to admit I don't think I've ever seen such a turn of events like the 2nd red card (just a regular obstruction probably not even a yellow card) which would've been really harsh but then turn into one of the most random red cards on a completely clean tackle from Ristovski, Referee needs to be banned or have his head checked, if that's a red card then any foul which ends up even making contact with the other player is pretty much a red card...

Didn't watch Benfica so can't comment, judging by Braga's defeat at their own ground to Porto, I wouldn't be too worried if I were a Benfica fan.

Certainly an interesting set of games.

I was quite looking forward to the Braga v Porto game. Braga began the game with a bit of a desire to play which was fantastic. They got their early goal ( a dreadful error on Casillas behalf. Why call for...

Certainly an interesting set of games.

I was quite looking forward to the Braga v Porto game. Braga began the game with a bit of a desire to play which was fantastic. They got their early goal ( a dreadful error on Casillas behalf. Why call for offside? Even if you think it’s a pretty much guaranteed goal, play until it goes in....if it’s pffside the VAR will call it because it is off and not because you raised your hand). Unfortunately shortly after their goal they chose to turtle in. Why do teams ever think this is the best strategy. Porto weren’t fantastic on the night to be quite honest, however give a team enough time on the ball and they will eventually cause you some trouble....even then it needed an awful corner to be given away to get their....lol

Onto the second half and we get...: more of the same Xd. Braga get another goal from another defensive error. They turtle up again and invite pressure all game. The first penalty is a little clumsy, but understandable given the fact that the Porto player is facing the net, he needed to try and get a piece of the ball but failed.

The second penalty however is foolish. You can’t swing like that in a box that is congejested....that’s asking for trouble.

Naturally Braga try pressing... a little late now though so you got what you deserved lol.


Benfica game was mostly one way traffic, as expected. Tondela did have their counters though, a couple of very good opportunities that they did not capitalize....but that’s the story of most big vs small....they’ll get a couple chances, if efficient then game on, if not then good luck haha.
Tondela did close up show quite impressively however. Benfica creates but not too frequently.
There was a penalty shout that I persnonally believe was a penalty, but no harm done in the end so whatever.

Chose not to watch sporting as their matches tend to be a snore unfortunately. Good on them for grabbing three points though. Will they be able to hold third? It’ll be interesting at least!

Euan
This comment was minimized by the moderator on the site

Can anyone explain how Adel Taarabt managed to get on the park (let alone the bench) for Benfica?!?

Euan
There are no comments posted here yet