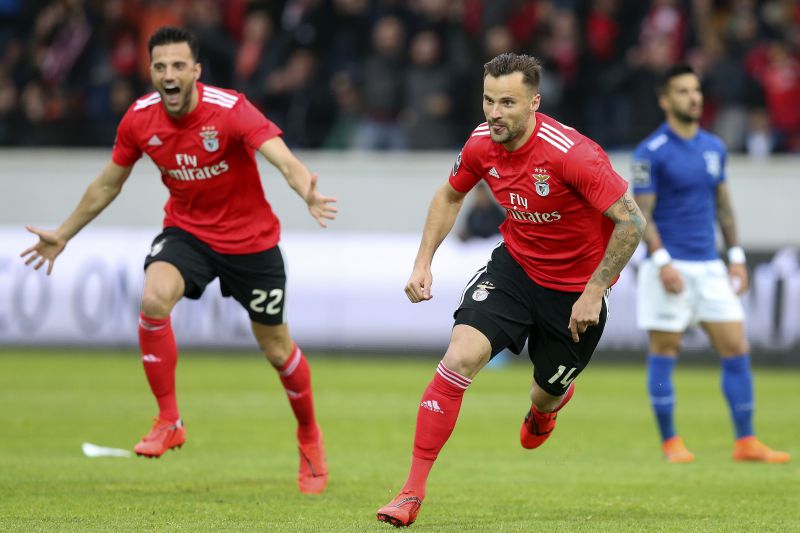 Tondela launched a stunning comeback to beat Portimonense last night to conclude Liga NOS week 28, a round of matches that saw the battles at both the top and bottom of the division tighten up as we enter the final stretch of the season.

The race for 5th intensified too as both Moreirense and Vitória Guimarães won, while Sporting took advantage of Braga’s recent slump to move clear in 3rd. At the top, Porto won the opening match of the round before Benfica reclaimed 1st place after a Haris Seferović-inspired victory over struggling Feirense.

27 year old Swiss striker Seferović arrived at Benfica on a free transfer in the summer of 2017, his acquisition from Eintracht Frankfurt seeming a real coup at the time. However, he would go on to struggle heavily in his first campaign, unable to depose Brazilian Jonas from then-manager Rui Vitória’s preferred starting XI, and looking completely bereft of confidence when his chances would come along.

Fast forward a season though and the tables have turned for Seferović, he’s looked a changed player completely as he currently heads the Liga NOS scoring charts with 18 league strikes, and his form has largely consigned an admittedly injury-hit Jonas to the bench.

In contrast to the misfiring striker of 2017/18, this time around Seferović has been able to show off the all round attributes that have made him such a danger in this league, being a good finisher but also a strong physical presence, and very capable in aerial duels.

In Sunday’s win over Feirense Seferović was largely quiet during a first half full of controversy, Benfica coming from behind to lead 2-1 at the break through goals from Pizzi and André Almeida.

The Swiss came alive in the 2nd half though to help seal the victory that returned the Lisbon side back to the top of the table, and also push himself closer to sealing the league’s golden boot for the season.

Seferović was off the mark in the 49th minute with a goal indicative of the high level of confidence he is now playing with. A miscommunication in the Feirense between goalkeeper Caio Secco and centre-back Bruno Nascimento left an unguarded net for Seferovic to aim at but he was still a fair way from goal, however the striker produced a superb instinctive lobbed volley to make the points safe for the league leaders.

Seferović then rounded off the scoring in the 89th minute with a goal perhaps more typical of his style, impressively heading in Álex Grimaldo’s cross to make it 4-1.

This remarkable change in Seferović’s fortunes has paid off domestically as his side looks favourites to reclaim the league title from Porto this season, but also Benfica are chasing glory in Europe too.

Fittingly, fate has drawn the Eagles against the Swiss striker’s former club Eintracht Frankfurt at the quarter final stage, so he’ll be very keen to pick up where he left off at the weekend and show his old team what they are missing on Thursday night.