Sérgio Conceição: “This ain’t over yet” 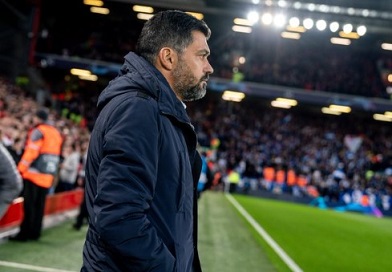 In 19 visits to England in European competition, Porto have never won, losing 16 and drawing 3 matches. Had Moussa Marega been sharper in front of goal the Dragons could have brought an all-important away goal back to Portugal, but coach Sérgio Conceição insists the tie is far from over.

Porto set up with a 5-man defence in an attempt to stymie Liverpool’s powerful attacking weapons, and the opening exchanges of the match were encouraging for the visitors with play confined to the home side’s defensive half of the pitch.

However, in the very first attack by the Reds the ball was worked to Naby Keita on the edge of the box, whose shot took a fortunate deflection off Óliver Torres to loop past Ikar Casillas and give Liverpool the lead in the 5th minute. The goal sapped Porto’s confidence, Salah twice came close to scoring as the home side dominated, and it was little surprise when Firmino doubled the lead in the 26th minute, tapping in from close range after a good move involving Henderson and Alexander-Arnold.

Almost immediately Porto had a golden chance to hit back as a pass from Óliver sent Marega clean through, but the Malian striker could not beat Alisson who saved with his legs. From the resulting corner there was a loud shout for a penalty, but after consulting VAR the referee dismissed claims for an Alexander-Arnold handball.

There were further chances at both ends for Marega and Firmino but it remained 2-0 going into the break. The second half started with Mané finding the net, but from an offside position, and the rest of the match was a more low-key affair, with Liverpool intent on saving energy and a more circumspect Porto finding it easier to keep the home side at bay.

Marega again had a chance to take aim a couple of times, but Alisson saved his angled shot comfortably and from a second opportunity he shot wide. Porto manager Sérgio Conceição later revealed the striker had been ill and vomiting all day. We will never know if a 100% Marega would have found the net, but an away goal would certainly have given the tie a completely different complexion.

Porto are not completely out of it, and on the evidence of this game it is not inconceivable the Blue and Whites can score two goals against the English Premier League leaders. The problem, however, will be not conceding at the other end…

“We are at the halfway stage of the tie, we’re in the interval, this ain’t over yet. The lads in the changing room find it tough to accept this result. We believe we played a competent match, we could have got a different result, we could have left Anfield with a goal.

“The change in formation? Salah and Mané can go wide or come inside and are extremely dangerous. I thought this set-up would give us more balance, without losing our goal threat.”

“It was a tough week for me. I underwent treatment night and day and missed some training because of my injury. But I do everything for my club and my profession.

“It’s not the positive result we wanted but we gave our all and showed we are a strong team, against powerful opponents. We’re disappointed with the defeat but we’re still alive. We’ll be fighting to get through right to the end.”

“The result is bad, but it’s still wide open. Next week we play at home and we are perfectly capable of scoring two goals.

“We started well, but the goal shook us a little. The goal was against the run of play. Worse was conceding the second goal, but in the second half we responded very well. When we attacked Liverpool we caused them lots of problems.”

This season has proved that Conceicao is a passionate, fiery coach but one who is also extremely limited and not good enough at the highest level.

Tactically, he is so lacking in fundamentals, it is frustrating to watch. His insistence on...

This season has proved that Conceicao is a passionate, fiery coach but one who is also extremely limited and not good enough at the highest level.

Tactically, he is so lacking in fundamentals, it is frustrating to watch. His insistence on playing Militao at RB has been part of a significant drop in Porto performances and results since January.

In the Champions League, just as in the domestic league, he has shown that he has one gameplan for attacking, which is basically trying to get Marega in space and hoping that something comes from that.

Honestly, I like him but his lack of tactical understanding and gameday selection is just not good enough. Why you would bench Brahimi and start with a never seen before 5 man defense just proves that you are not only lacking ideas but you have little faith in your philosophy.

I have always been a bit different in relation to other Porto fans. I never rated Andre Villas Boas, as I always felt C grade managers like Mark Hughes or Sam Allardyce could have won the Champions League with the 2011 Porto squad. Where is AVB now?

I feel Porto has squandered some truly talented managers such as Vitor Pereira and Paulo Fonseca, in favour of failed projects such as Nuno Espirito Santo and Julen Lopetegui. I am grateful that Conceicao brought back the title last season, but similar to AVB, the title has been his to lose, as Porto has had the best squad in Portugal by far in the last 2 seasons.

But despite the ability of Militao, Felipe, Alex Telles, Danilo, Oliver, Marega, Brahimi and others (these are some too shelf talents), Conceicao is at risk of losing the league and wimpering out of the Champions League. I had hoped he would have progressed and learned from his mistakes, but he has proven not to.

I am not sure how to move forward. I feel Sergio inhabits a space much like Fernando Santos. His passion and trophy have earned him significant goodwill so that no one will admit the truth; it may be time to move on and get someone with fresh ideas and better tactics into the job.

Conceicao has been a very good coach for Porto and you are criticizing him?

Porto lost to an elite team plain and simple. Portuguese teams can’t complete with the best in the champions league, unfortunately . The club game is driven by money .

Your assertion that 2011 Porto squad would win the champions league with Sam Allardyce as coach is, quite frankly, one of the dumbest things I’ve ever read.

Do you think they would have beaten the 2011 CL winning Barcelona side with peak Messi, xavi and iniesta... also David villa fresh from winning the World Cup with Spain? Barcelona from 2009-2011 was simply amazing... only mourinho anti football inter Milan in 2010 stopped them .

Porto in 2004 won the CL and were a strong side ... but let’s not forget they played man united , Lyon, Deportivo, and Monaco to win the title. Not to diminish that but as far as CL draws go things fell their way that season.

I just want to reiterate that Conceicao has done well with Porto last couple years ... the squad is limited.. I completely disagree with the opinion that Porto is “by far the best squad.”

Porto lacks depth and most of their players are direct...

I just want to reiterate that Conceicao has done well with Porto last couple years ... the squad is limited.. I completely disagree with the opinion that Porto is “by far the best squad.”

Porto lacks depth and most of their players are direct hard running African-style footballers, which suit Conceicaos in-your-face style and passion. It works against physically weak Portuguese sides as they get worn down by the recentless runs of players like marega and Brahimi.

I agree in top level football conceicao is out of his depth . Running a lot and playing with passion and acting like a douche doesn’t cut it outside of the small pond football league of Portugal .