Benfica bat away pressure at the top following routine wins for Porto, Sporting and Braga 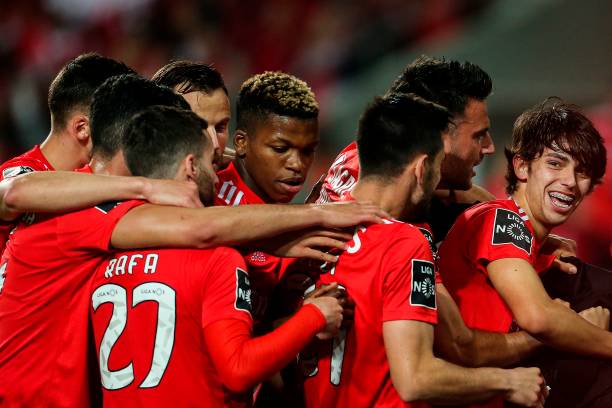 Benfica held onto first place in the Primeira Liga for another week after defeating Vitória de Setúbal 4-2 at the Estádio da Luz, this Sunday, holding off second-placed FC Porto following their success away to Portimonense, a day prior.

The Dragons moved up to first place temporarily with a 3-0 win, this Saturday, before the likes of Rafa Silva, João Félix and Haris Seferovic powered Benfica back up to first place, in response.

Also in the hunt for a place on the Liga NOS podium, ten-man Sporting firmed up their bid with a 3-1 victory away to Desportivo das Aves, as Sporting de Braga also found three goals themselves to fund a 3-0 win over Tondela and remain within touching distance of the Lions. PortuGOAL has more from the top of the Primeira Liga table.

With a Champions League tie versus Liverpool still somewhat in the balance, FC Porto resisted the temptation to rotate their squad away to mid-table Portimonense with a tense title charge in mind.

From the edge of the box, Yacine Brahimi had all the time and space to attack a Moussa Marega pull-back and pick his spot in the 15th minute, giving Porto a welcome lead in southern Portugal.

Portimonense reacted well, closing in on an equaliser four minutes later when Tiquinho Soares, back to defend a corner, directed a headed clearance towards his own goal before hitting Iker Casillas’ near-post.

The Blue and Whites held onto their slender lead going into the interval, taking until the 73rd minute to add greater comfort to the scoreline via Marega, dinking a finish into the far post after emerging one-on-one with the keeper.

Porto’s killer blow game via Héctor Herrera in the 93rd minute, swooping up on the rebound to smash in a third from close range and conclude a 3-0 victory for the visitors, momentarily occupying top-spot.

A problematic start for Sporting promised a difficult night for Marcel Keizer’s men away from home, being reduced to ten-men following a challenge from Renan Ribeiro in the 3rd minute that saw the referee brandish a red card to the Brazilian goalkeeper.

The Lions’ remedy appeared in the 24th minute, reacting well to the early set-back with Luiz Phellype’s fourth goal in three games, glancing in Marcos Acuña’s cross from the left flank.

The half-hour mark had Romain Salin landing Sporting back in trouble after conceding a penalty, converted by Falcão, before Jeremy Mathieu was on hand to cancel out the equaliser and set the visitors off with a 2-1 lead going into half-time.

Bruno Fernandes got himself in on the act in the 83rd minute with his 28th goal of the campaign, becoming the highest-scoring midfielder in a season in Europe this century with a headed goal that secured a 3-1 win for Sporting.

In their quest to bring a string of consecutive defeats in all competitions to an end, Braga welcomed Tondela to the Estádio Municipal, this Sunday, needing a win to remain within touching distance of third-placed Sporting.

Less than a minute into the game, Wilson Eduardo kick-started the mission in an ideal manner, finding the top corner on the half-volley after Murilo Costa’s cross from the left made its way to the Angola international.

Braga intensified their search for goal number two throughout the first-half, striking luck in the second period when Paulinho’s effort against the post rebounded back in off goalkeeper Claudio Ramos’ for an own goal in the 64th minute.

Fransérgio added the finishing touches to a 3-0 win in the dying embers of the game, collecting Paulinho’s pass before slotting a finish across goal, moving the hosts back to being within three points of the automatic Europa League spots.

“Winning” was all that was on the lips of the Benfica fans filling up the Estádio da Luz ahead of Sunday night’s clash versus Vitória de Setúbal, as it would grant them top-spot in the Primeira Liga for another week.

Rafa’s influence proved pivotal in the first half, handing Benfica the lead two minutes in before doubling his account in the 36th minute, making up for an earlier penalty miss from Pizzi close to the half-hour mark.

An emphatic finish from Nuno Valente reduced the Eagles’ advantage just before the break, only for it to be restored by the in-form João Félix early in the second period, taking André Almeida’s cross first time and firing a shot deep into the back of the net for 3-1.

Seferovic placed the game beyond any doubt in the 77th minute, opening up his body and finishing on his favoured left-foot inside the box before a late consolation goal from Jhonder from the penalty spot completed a 4-2 score-line in the league leader’s favour.