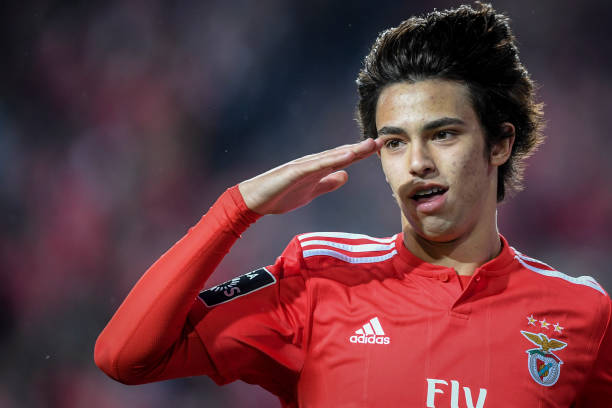 Benfica have kept their place at the top of the Primeira Liga table after hammering Marítimo 6-0 at home, this Monday.

FC Porto initially made the move up to top spot with a narrow, hard-fought victory at home to Santa Clara on Saturday night, relying on a first-half Moussa Marega goal to claim all three points.

A Man of the Match performance from João Félix helped Benfica reverse the picture at the top of the table, however, as the likes of Franco Cervi, Pizzi and Eduardo Salvio also starred against Petit’s Marítimo in a 6-0 thrashing.

Elsewhere, Sporting made it seven league wins on the spin with a 1-0 win against Nacional, in Madeira, keeping Sporting de Braga away from third place after their 2-0 triumph over Feirense. PortuGOAL brings you more from the leading Primeira Liga sides.

The Lions traveled to Madeira on Good Friday in hope of adding another victory to a string of six consecutive wins, taking on a Nacional side desperate to avoid the drop.

Marcel Keizer’s men could only produce a handful of efforts on goal in the first half, all comfortably dealt with by Daniel Guimarães between the sticks for Nacional, with Abdoulay Diaby going closest with a toe-poke inside the box in the 31st minute.

A change of fortunes in front of goal for Sporting came with a lapse in concentration from the Nacional backline in the second half, allowing Luiz Phellype the time and space to finish Marcos Acuña’s whipped free-kick from close range, placing the visitors in the lead after 62 minutes.

The Brazilian striker’s goal separated both teams at full time, edging ‘the Green and Whites’ closer to securing a third-place finish in the Liga NOS table.

In need of a win to reply to Sporting’s victory away to Nacional, Braga were hosted by already-relegated Feirense on Saturday afternoon, with the odds favouring Abel Ferreira’s side heavily.

Fransérgio came the closest to opening the scoring for the Arsenalistas when directing Palhinha’s cut-back onto the post, seeing his effort followed up by dangerous attempts from Paulinho and Wilson Eduardo within the first half-hour.

Far more fortunate in the second period, Fransérgio was on hand to give Braga the lead with his head in the 46th minute, courtesy of Ricardo Esgaio’s cross.

Before Feirense could pipe up at the other end, Ricardo Horta placed the game beyond any doubt with Braga’s second, again supplied by Esgaio in the 76th minute, as the visitors moved back to being within three points of Sporting with a 2-0 win.

After Wednesday’s elimination from the UEFA Champions League by Liverpool, focus was placed solely on the hunt for back-to-back titles in the Porto camp, preparing for Santa Clara’s arrival at the Estádio do Dragão.

Quick football in and around the visitors’ box enabled Otávio a clear strike at goal, his shot was saved by Marco but Marega was on hand to slot the rebound into an empty net, giving Porto the lead in the 18th minute.

A handy Iker Casillas intervention kept Santa Clara’s Guilherme Schettine from equalising with a back-post header a little before the hour-mark. An even better save at the other end saw Marco deny his former teammate, Fernando Andrade, from amplifying Porto’s lead in the 75th minute, setting up a potentially tense finish.

The Dragons would survive the test, however, holding onto their 1-0 advantage and moving back up to first place momentarily.

Much like their title rivals, elimination from Europe has enabled Benfica to cure their midweek woes with some much-needed focus on the battle for the Liga NOS title, as Marítimo aimed to pose a challenge.

The Eagles hotshot Félix looked to make light work of the threat posed by the Madeirans in the 3rd minute, meeting Pizzi’s rehearsed corner-kick delivery to send a side-footed effort rocketing past Charles for the game’s first goal.

Well on top throughout the first period, Benfica accentuated their dominance in the second period through Pizzi’s half-volley inside the box, firing in from André Almeida’s cross in the 48th minute.

Bruno Lage’s side took their advantage all the way up to three goals in the 64th minute, with Félix nabbing a second, attacking André Almeida’s ball into the box at the near post.

Félix tried his hand at creating in the 71st minute, setting Cervi on his way to making it 4-0 with a dink over the goalkeeper. The Argentine wasn’t done there, emerging in the 81st minute to pick up a poor Marítimo clearance and drive a shot low into the bottom corner.

The final honours fell to another Argentine, Salvio, as the second-half substitute took flight to bury a header from Alex Grimaldo’s cross, totalling up a 6-0 demolition job.

That was an excellent team performance from start to finish.

Joao Felix fully deserves all of the praise he gets week in week out -- The kid is pure class. Florentino and Ferro have also made a remarkably smooth transition to the A team.

That was an excellent team performance from start to finish.

Joao Felix fully deserves all of the praise he gets week in week out -- The kid is pure class. Florentino and Ferro have also made a remarkably smooth transition to the A team.

Florentino's ability to be at the right place at the right time to make a timely tackle or interception (especially when we counter-press) is extremely impressive. His football IQ is through the roof, he's neat and tidy in possession, and despite his age, he always looks the calmest, most assured player on the pitch.

Ferro seemingly came out of nowhere thanks to injuries to Jardel and Conti, and he's quickly emerged as Benfica's best center-back -- by some distance! Like Florentino, he never seems to be overawed by the occasion. His reading of the game is superb, he's strong, yet clean in the tackle, he's dominant in the air, and he's quite possibly the best ball-playing defender in the entire league.

Santa Clara is currently sitting in 9th position in the table with a very respectable GF/GA ratio. With a little more luck they could be as high as 5th as their stats closely match Moreirense.

A first year club from the 2nd division competing...

Santa Clara is currently sitting in 9th position in the table with a very respectable GF/GA ratio. With a little more luck they could be as high as 5th as their stats closely match Moreirense.

A first year club from the 2nd division competing with Porto and almost beating them. If you watched that game Santa Clara never stopped attacking and even though the goals were offside they finished them well. Saint Iker had to make a top shelf save to deny them their goal.

Thoroughly impressed with the outfit from Ponta Delgada.

If Joao Felix has to leave, Atletico Madrid, Tottenham Spurs or Man City would be Great for development for a few years. Otherwise another Season in Portugal would do well for him.

Again with Joao Felix.
You would think by reading this site he is the next coming of Jesus Christ.