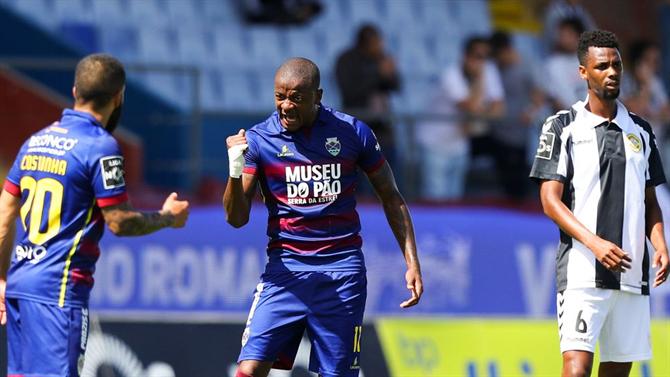 Week 31 of Liga NOS 2018/19 saw a significant shift in the title race as Benfica took full advantage of a late Porto slip away at Rio Ave to further enhance their hopes of wrestling the championship back off their fierce rivals.

Benfica hammered Braga, who now look destined for 4th place after a late season slump, of which a more consistent of late Sporting have benefited from. Moreirense continued to struggle to fully wrap up 5th place, although have been aided by similar drops in form for the other contenders Vitória Guimarães and Belenenses, the trio all tasting defeat this weekend.

Much remains to be decided down at the bottom though, and having looked adrift a few weeks back it is Chaves who are on the charge, thrashing fellow relegation battlers Nacional to make it 7 points from their last available 9. Brazilian striker William boosted their survival hopes with a timely trio on Sunday afternoon, and he is PortuGOAL’s Figure of the Week.

William Alves de Oliveira, a 27 year old Brazilian striker, has now been with Chaves since 2016 upon their return to Liga NOS that summer. While he’s not really been the most prolific of forwards during his time in Portugal, he has usually been a fixture in varying managers’ preferred XIs due to his hardworking, robust style, and ability to link attacks and hold the ball up when required.

He, like the rest of his team, has largely struggled in what has been a very difficult campaign for Chaves. Hopes of repeating their 6th place finish from 2017/18 were positive after a decent looking squad was assembled last summer, and the hiring of talented manager Daniel Ramos looked a shrewd one.

A thrashing at champions Porto on the opening day aside, there weren’t too many warning signs early for Chaves and William both, the latter notably scoring an excellent solo goal against Marítimo but things quickly went south for club and player as a length relegation battle has followed.

While they remain in the drop zone, Sunday’s vital victory could prove a real catalyst for maintaining their top division status and William led their charge from the front from the off, looking extremely sharp in the opening exchanges.

Nacional were caught cold as early as the 9th minute as William began and finished a good move for Chaves’ opening goal. The Brazilian dropped deep to lay a pass off to Gevorg Ghazaryan, who in turn found full back Djavan on the overlap. There, he found that William had powered past a static defence to ghost in a powerfully head in from close range.

William had gone into the match off the back of a 15 match goal drought, but breaking the cycle early clearly did wonders for his confidence and he didn’t have to wait long for his second of the afternoon. João Camacho had levelled for Nacional from the penalty spot but Chaves regained the led when William headed home Lionn’s stunning deep cross in the 22nd minute.

Into the 2nd half Chaves extended their lead and again William was involved in the build up. He found Niltinho on the right flank, and directed his compatriot towards Luther Singh lurking in acres of space, and the South African made no mistake with an unerring finish for 3-1.

Chaves were dominant, had the chance to make the game well and truly safe from the spot after Djavan had been scythed down in the box in the 85th minute. Usual kick taker Renan Bressan commendably gave the responsibility to William in order to complete his treble, and a fine all round performance was capped by comfortably tucking the ball away for an emphatic 4-1 final score.

The result wasn’t enough to lift them out of the bottom three in the division, but crucially they moved level on points with Tondela just above them, who fell to a loss away at Marítimo.

On paper Chaves certainly have more than a chance of survival, the fixture list has been kind in that they face bottom half sides in each of their final 3 matches, including already-relegated Feirense. This coupled with William’s surge in form suggests you wouldn’t bet against the Flavienses sticking around for 2019/20 in Portugal’s top flight.