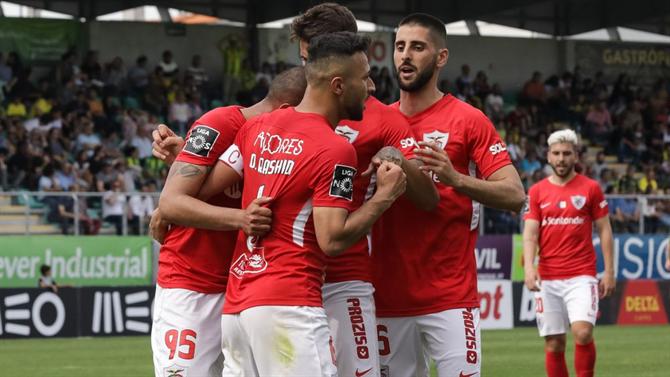 The conclusion of Week 32 in Liga NOS means just two more rounds remain before the 2018/19 reaches its climax. There is plenty left to decide but Marítimo, Boavista, Aves and Portimonense were all among teams to have officially avoided the dreaded drop to the second tier after results went their way.

Benfica kept their heads to inch ever closer to winning the league title, already relegated Feirense played out a thrilling 4-4 draw with Chaves, while Sporting annihilated Belenenses in a Lisbon derby.

Another team to add the aforementioned list of safe teams though was Santa Clara, who guaranteed their top flight permanence in their first season back in Primeira Liga since 2002/03. One of their star performers all season long was again to thank in victory over Tondela, midfielder Osama Rashid is PortuGOAL’s Figure of the Week.

27 year old Rashid, of Iraqi and Dutch heritage, joined Santa Clara from Bulgarian side Lokomotiv Plovdiv, who he had signed for off the back of a previous spell in Portugal with Farense. Rashid came through Feyenoord’s youth system but has hitherto struggled to make the grade at a particularly high level.

Joining island side Santa Clara in 2017 though has been a good fit, firstly helping them to promotion to Liga NOS in his first full season with the club in 2017/18. Equally comfortable at the base of midfield or slightly further forward in central areas, Rashid is a very good passer of the ball but also his excellent strength, stamina and energy levels see him able to get around the pitch efficiently. His leadership qualities have not gone unnoticed too, captaining the side throughout the campaign.

At times on Sunday these qualities were too much for a struggling Tondela team to contend with. His midfield combinations with the likes of Bruno Lamas, Martin Chrien and Francisco Ramos have shown real signs of improvement of late, and the latter pair along with Rashid made a confident start to the game at Estádio João Cardoso.

Rashid has been adept from dead balls this season, reliable from the spot and direct free-kicks throughout the campaign.

Tondela threatened a comeback thereafter and got their reward in the second half by levelling with a penalty of their own. However, with a confirmed place in next season’s Primeira Liga on the line, Santa Clara stepped it up again to regain the lead through Guilherme Schettine.

With 15 minutes to go Rashid and Santa Clara put the gloss on a great away performance. The Iraq international made an excellent run from inside his own half, out-pacing Tondela full-back David Bruno to latch onto Schettine’s excellent square ball to confidently fire fast time past a despairing Cláudio Ramos dive.

It was a terrific finish made to look easy from arguably Santa Clara’s best performer this season, aside the early campaign efforts of Fernando Andrade who was poached by Porto in January.

The 3-1 win mathematically confirmed Santa Clara’s safety but in reality their excellently consistent campaign has never really seen them in any danger of going straight back down to the second division.

The Azores-based side are little known, like Rashid himself, but manager João Henriques has done an outstanding job in managing the player and club alike, coasting to safety where other more established names like Boavista, Vitória Setúbal and Chaves have struggled. Interesting times ahead for Os Açoreanos.

PeakyBoy
This comment was minimized by the moderator on the site

First was a bit cleverer and the rest were simple and cool. Second half was absolutely amazing.