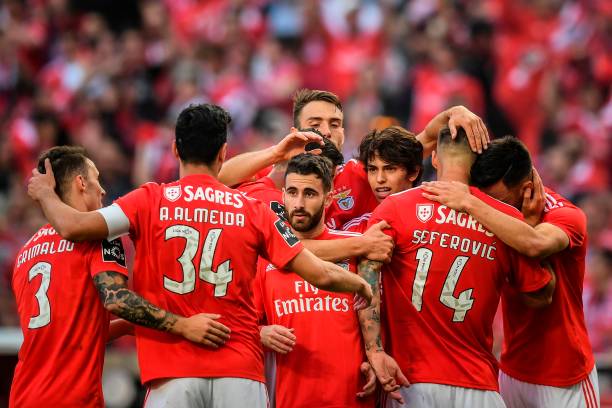 Benfica have claimed their 37th league title with a comprehensive 4-1 victory at home to Santa Clara, this Saturday, as the Primeira Liga season drew to a close.

The Eagles required just a point to nail champion status, meanwhile anything but a win for Porto in their Clássico versus Sporting would also take the title back to the red half of Lisbon.

Bruno Lage’s men went one better, however, turning on the style at the Estádio da Luz with a 4-1 triumph. Porto took the bragging rights against the Lions with a 2-1 turnaround in the opposing game, meanwhile there was one final win for Sporting de Braga to pick up in their encounter versus Portimonense. PortuGOAL rounds up the top action from the final day of the season.

The Eagles came into their final game of the season requiring just a point against Santa Clara to reclaim the Portuguese league title, but all eyes were firmly on a win to crown the evening as champions.

Haris Seferovic took an important step towards doing just that for his side in the 16th minute, sneaking in behind the Santa Clara defence to meet Andreas Samaris’ lofted pass before converting.

Ex-Benfica man Fábio Cardoso threatened to peg a goal back for the Azoreans soon after before João Félix popped up to make it 2-0, working his way into shooting range before a powerful strike inside the box left Marco helpless between the sticks.

Rafa Silva amplified the score in the 39th minute, racing in from Seferovic’s glancing header to finish first time and set the Eagles into the break with a comfortable 3-0 lead.

Clear in the race for the Golden Boot, Seferovic made it four in the second half moments before César was on hand to turn in a goal for Santa Clara at 4-1 in the 59th minute. The Eagles held onto the score-line through to the final whistle, celebrating in style their return to the Primeira Liga summit.

A real heavyweight curtain-call came to test Porto, still hanging onto a glimmer of hope of winning the title, in their final outing at the Estádio do Dragão in a Taça de Portugal rehearsal between the hosts and third-placed Sporting.

The visitors’ odds looked less favourable in the 17th minute after a Bruno Gaspar pass back to Cristian Borja caught the Colombian with ground to make up before pulling back the goal-bound Jesús Corona, aiming to burn past Sporting’s defence. Borja initially claimed a yellow card for the foul before a VAR review turned it into a red for a last-man challenge, much to the discontent in the Lions’ dugout.

Porto paid the price in the second half for not taking the lead in the 58th minute via Danilo Pereira, volleying just wide on the turn via a minor deflection, as Sporting took their chance on the break to go a goal up via Luiz Phellype minutes later.

After hitting the bar, Danilo was the man to drag Conceição’s men level with a close-range header, setting up a tense finale that almost saw the score swing Porto’s way late on, had it not been for the heroics of Renan Ribeiro and Jeremy Mathieu protecting the Sporting goal.

Héctor Herrera’s persistence overpowered the Green and Whites in the 87th minute, however, turning the game on its head with an acrobatic finish across goal. The Dragons bowed out with a 2-1 win, but not before tensions boiled over in the latter stages of the game, consequently earning Corona a red card that rules him out of next weekend’s cup final.

Capping off an at times pulsating, yet ultimately underwhelming campaign, Braga were the first of the big four in action when hosting Portimonense on Friday night, hoping for a last hurrah to put an end to three straight league defeats.

Earning a rare start, Xadas was quick to repay Abel Ferreira for a spot in the Arsenalistas’ XI in the 12th minute with the game’s first goal, keeping his strike low from Ricardo Esgaio’s cut-back.

The best Portimonense could offer in response came from Bruno Tabata’s whipped cross, catching his teammate, Jackson Martinez, somewhat flat-footed before the latter shinned the delivery wide of the target in the 34th minute.

A handball from Jadson just before the hour-mark gave Dyego Sousa the opportunity to add to his goal tally and make it 2-0 from the penalty spot, with the Brazilian-born forward making no mistake for his 15th in the league.

Braga could’ve had more goals to celebrate had it not been for Shūichi Gonda in the Portimonense goal, meanwhile the misfiring Aylton squandered his fair share of opportunities at the other end in his failure to alter a 2-0 score-line.

We were 7 points behind Porto, languishing in 4th place -- all hope seemed lost. Enter Bruno Lage. What that man accomplished was nothing short of extraordinary. We went up to Guimaraes and beat Vitoria, we went to the Alvalade and demolished...

We were 7 points behind Porto, languishing in 4th place -- all hope seemed lost. Enter Bruno Lage. What that man accomplished was nothing short of extraordinary. We went up to Guimaraes and beat Vitoria, we went to the Alvalade and demolished Sporting, and then, in the game that would ultimately decide the title, Benfica went up north and thoroughly outplayed Porto.