Five reasons why Benfica are champions 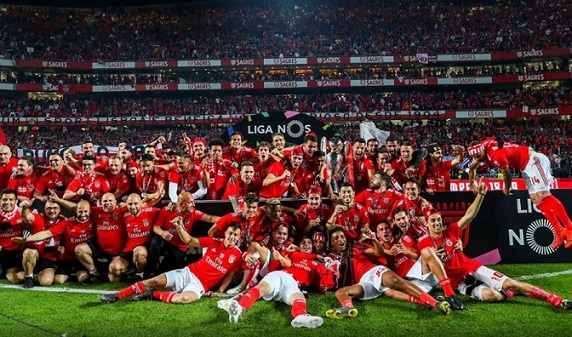 As expected, Benfica swept aside Santa Clara at the Estádio da Luz this afternoon to become Portuguese champions in 2018/19. Goals from Seferovic (x2), João Félix and Rafa Silva meant Porto’s comeback victory against Sporting was in vain as the Eagles finished on 87 points, two ahead of their northern rivals.

It completes a remarkable turnaround for Benfica. When losing 2-0 to Portimonense in January, the Lisbon giants dropped to 4th place in the table and were 7 points behind leaders Porto. Coach Rui Vitória was sacked, Bruno Lage was put in charge, initially on a temporary basis… and the rest is history.

Here are five reasons why Benfica’s supporters will be celebrating long and hard in the Portuguese capital tonight.

It is impossible to overstate the impact the former B-team coach has had on Benfica’s season. His predecessor Rui Vitória had done a more than reasonable job, winning the title in 2 out of 3 seasons, yet his conservative brand of football, especially in the big matches had never convinced the Benfica faithful.

Lage brought a whole new attitude to the team, making Benfica a front-foot outfit no matter who the opposition. Indeed, some of the team’s best performances came against their biggest rivals, the 4-2 hammering of Sporting at Avalade and the crucial 2-1 victory at Porto springing to mind. In double quick time, Lage turned Benfica into an unstoppable goal-machine, scoring an incredible 72 times in the 19 Liga matches when he was at the helm, of which Benfica won 18 and drew one.

Benfica president Luís Filipe Vieira had been promising to make the club’s academy a central part of the first team for so long it had almost become a running joke. This season, finally, there has been real substance to back up the president’s long-term goal. João Félix, Florentino Luís, Ferro and Gedson Fernandes have all played key roles throughout the year, while Rúben Dias followed up his breakthrough season with another strong campaign. It may have taken time, but Vieira’s focus on making Seixal the heart of Benfica’s future has been fully vindicated.

With fellow Portuguese players Pizzi and Rafa Silva also enjoying outstanding seasons, it has made a refreshing change to see six or seven Portuguese players in the line-up week after week, when the norm over the last two decades has been one or two.

Benfica have scored more goals in 2018/19 than any team in the league for 55 years – 103, which is not half bad in a 34-game season. The appointment of Bruno Lage was the turning point. He immediately installed Haris Seferovic, João Félix and Rafa Silva as a three-pronged attack, the trio scoring 27, 20 and 21 goals respectively this term.

Brilliant teenager Félix hogged most of the headlines, but special praise must be set aside for Swiss centre-forward Seferovic, who gave no indication he was capable of attaining such heights in a disappointing first season in the Portuguese capital. Indeed, the 27-year-old started the season 4th in the pecking order among Benfica’s strikers, but was rewarded for a first-class attitude, never whinging to the press but rather persevering to prove his worth.

After week 15 Porto were seven points ahead of Benfica and five points ahead of second-placed Sporting, with both Lisbon rivals set to visit the Dragão in the second half of the season. The Dragons seemed set fair to retain their title. However, by early March Porto had frittered away their lead with costly away draws at Sporting, Moreirense and Vitória Guimarães in quick succession, followed by the home defeat against Benfica. While calling it a collapse may be going too far – only Benfica’s incredible winning run managed to rein in the Blue and Whites – the northerners will certainly feel they had the title in their grasp and let it slip.

Sporting may have had a better-than-expected season following last summer’s commotion, but inconsistency has again cost them dearly, while Braga looked like they may be in the hunt until hitting a run of form that had their president António Salvador describing their end of season as “disastrous”.

In a league where the top three contenders are historically so far ahead of the rest, the results between Benfica, Porto and Sporting carry a lot of weight in the final outcome of each season. Benfica this season won three and drew one out of their four matches against their two storied rivals, including the decisive blow by beating Porto 2-1 on 2 March at the Estádio do Dragão. It was a result that saw Benfica leapfrog their opponents to go top of the table. They never relinquished first place.