Chronicle of a sad day for Sporting Clube de Portugal 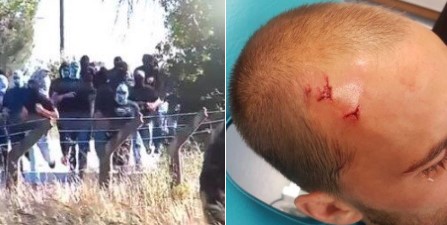 The Lisbon club’s academy has consistently developed some of the world’s great footballers and is the only one to have produced two Ballon d’Or winners – Luís Figo and Cristiano Ronaldo.

Yesterday it was again the centre of attention in the football world, but for all the wrong reasons.

At 5pm, as the first-team squad prepared to train in preparation for Sunday’s Portuguese Cup final, a group of 50 masked Sporting ultras stormed the complex, entered the changing rooms, violently attacked the players, coaching and medical staff and left a trail of destruction in their wake.

Striker Bas Dost was particularly badly treated, with reports saying he was kicked in the head. Pictures soon began circulating on the internet of the Dutch forward’s badly gashed head. “It’s a drama for everyone. We’re shocked. I feel empty,” Dost told Dutch newspaper Algemeen Dagblad.

A large proportion of the perpetrators, 21 according to reports, were apprehended by the police and face criminal proceedings.

Sporting’s controversial president Bruno de Carvalho arrived at the scene in the aftermath of the attack, but the players refused to talk to him.

Meanwhile, later in the evening hundreds of Sporting fans congregated at the club’s Alvalade stadium to repudiate the attack and show their support for the players, and particularly Bas Dost, with a huge image of the club’s star striker and Dutch flags on show.

It is impossible to justify the unjustifiable. But the background to yesterday’s attack is as follows.

The incident is the culmination of a turbulent few weeks for the club, beginning with Carvalho’s public criticism of individual players after the 2-0 defeat against Atlético Madrid in the Europa League first leg, which triggered a war of words between the president and the squad played out on the social networks, with Jesus attempting to intermediate.

A stand-off and an uneasy peace between the two sides ensued. This initial crisis seemed to have been weathered. Sporting won the second leg against Atlético 1-0 (but lost the tie on aggregate), performances and results improved and a second-place finish looked on the cards.

But defeat against Marítimo on the last day of the Primeira Liga season on Sunday meant Sporting missed out on Champions League qualification. Shortly after the final whistle had blown in Madeira, Sporting’s players were subject to heckling and insults from the club’s travelling supporters.

On Monday, a series of emergency meetings were held between Carvalho, the coach and the players, with rumours initially suggesting Jorge Jesus had been suspended. The president immediately rubbished these reports, confirming Jesus would take charge of the team in the Portuguese Cup final against Aves.

Carvalho said the meetings were held as a natural consequence of the weekend defeat that had cost Sporting many millions that the club were counting on in their preparations for next season.

The expectation was that big changes would be made after the Portuguese Cup final, with club captains Rui Patrício and William Carvalho, and coach Jorge Jesus all expected to leave. This latest turn of events, however, puts the position of the president himself under serious risk.

This has to be all BDC fault for starting a revolt against the players. I take it he didn’t think the supporters would take it to this level but they did.

Calling out players was a big mistake. I get it that it’s been X years and still no title...

This has to be all BDC fault for starting a revolt against the players. I take it he didn’t think the supporters would take it to this level but they did.

Calling out players was a big mistake. I get it that it’s been X years and still no title but this is hogwash approach. I normally stand by the owners but this was handled wrong in many ways. This butthead owes everyone an apology and should step down.

SCO has taken 3 steps back and will be out of competition for the next few years. Good luck BDC. Lmao

BdC is the undertaker of the whole Portuguese League and Portuguese Football in general. He is not about Sporting, he is only about himself, himself, himself. He is obviously a total narcissistic personality. To put himself in the media and in the forefront, he sacrifies everything and everybody else. The stupidity and ignorance of all those who still stay loyal to him is remarkable. It is his accountability, that every weekend the talk is a bout referees, blablah etc, but NOT about football. Already thought about, how toxic this is for the development of domestic football? It is his accountability that the Seleção will not have the incredibly important Adrien Silva in good shape due to the transfer desaster in summer. It is his accountability that sponsors will refrain from investing into the Portuguese League. And it is his accountability, that this Club that has the potential to at least not to be hated by everyone looks like a bunch of Dumbos. ANd he has NOTHING to do with what used to be Sportings biggest asset: The academy and the quality players it produces. He is the greatest liability for the quality, the class, the reputation and finally the success of Portuguese football. I am no Sportinguista, but I really feel with all Sporting fans that are against BdC. For those who still support him - puuhh, no comment.

BdC is the biggest idiot to hit Sporting since Bojinov.

So many questions here like how 50 inbred drop-outs managed to walk through the stadium with no one stopping them (security) or calling the police? Are stadiums in Portugal different than...

BdC is the biggest idiot to hit Sporting since Bojinov.

So many questions here like how 50 inbred drop-outs managed to walk through the stadium with no one stopping them (security) or calling the police? Are stadiums in Portugal different than they are here? No lockdown after matches? No security around dressing rooms?

BdC started a war with the players from nothing and this has been escalating for months now. He created a storm from nothing and it is remarkable he wasn't/isn't fired on the spot. The fact that 2 legged feloz hasn't stepped down immediately tells us everything we need to know about his accountability and mental stability.

I also watched what happened to the Porto supported in Guimaraes as he was assaulted by a bunch of kids and no one did a damn thing. What is happening in Portugal with the hooligans?

joe
This comment was minimized by the moderator on the site

Was there ever any doubt that when Carvalho was elected president this wasn't going to end well? Still it could get even worse before it gets better.

joe
There are no comments posted here yet