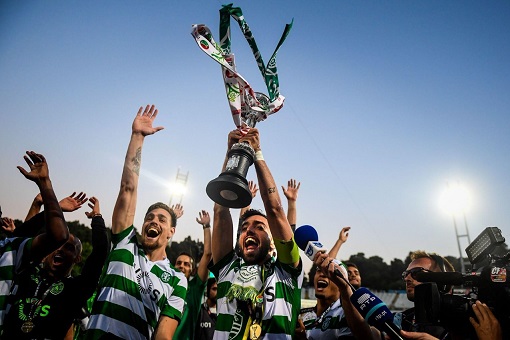 Sporting have won the Taça de Portugal after a hard-fought 2-2 draw, overcoming Porto’s last-minute equaliser in extra-time to triumph 5-4 on penalties.

Porto were the first to break the deadlock in an emotional cup final through Tiquinho Soares in the first half prior to Bruno Fernandes’ equaliser just before half time.

No goals in the second period meant extra-time action where Sporting eventually took the lead via Bas Dost. Felipe, with seconds to spare, dragged Porto back into the tussle ahead of a penalty shoot-out, with Sporting striker Luiz Phellype’s striking the winning spot-kick.

As expected, Sporting were left to contend with absences at full-back, with Bruno Gaspar and Marcos Acuña deputising for suspended duo Stefan Ristovski and Cristian Borja against a Porto side minus Iker Casillas and the suspended Jesús Corona. The four previous Portuguese Cup finals between these teams had all gone to extra time, and punters with an eye on history would have been rewarded if they bet on extra time, using betdaq bonuses for example.

Early pressure from the Lions seasoned the game up nicely but it was Sérgio Conceição’s men who had the first real sighting of goal in the 6th minute, as Gaspar was unable to clear his lines effectively from Moussa Marega’s byline cross and Sporting were left to rely on Renan Ribeiro’s reflexes to deny Otávio from point-blank range.

Bruno Fernandes registered the first effort on target at the other end before a Raphinha volley just past the 10th-minute mark whistled dangerously past Vaná’s bottom-right corner. The chances kept coming, and VAR made its appearance to chalk off Marega’s goal for Porto in the 23rd minute, the Malian receiving Tiquinho Soares’ knock-down from an offside position before believing he had placed the Dragons a goal up with a neat shot on the turn.

With the chase for the opener back on, Bruno Fernandes saw a good opportunity come his way when Acuña set Abdoulay Diaby down the left flank for the pull-back, but the Sporting skipper sliced his volley wide in the 29th minute.

Controversy hit in the 41st minute after the Lions’ backline believed Héctor Herrera had controlled a cross into the box with his arm, moments before his subsequent cross for Tiquinho Soares was headed home by the Brazilian forward for the game’s first goal.

Sporting’s timely reply saw them go into half-time level, as Acuña spotted Bruno Fernandes lurking on the edge of the box prior to the midfielder’s strike into the bottom corner, courtesy of Danilo Pereira’s deflection.

Soares came close to edging Porto back in front early in the second half, bearing down on goal from the left-hand-side of the area before striking his shot against Renan Ribeiro’s near post.

The Lisbon outfit took on the warning, closing up at the back before Wendel tried his luck from range deep into the second half at the other end, as his 75th-minute strike across Vaná’s goal skidded narrowly wide.

A slack pass from Renan between the sticks, intercepted by Herrera, almost landed the Green and Whites in hot water, with the former redeeming himself to deny the Mexican’s shot at goal in the 77th minute.

Wilson Manafá's skewed effort almost set Porto ahead in the cup tie, with Danilo Pereira diverting the full-back’s shot past Renan before the post came to Sporting’s rescue in the 91st minute, keeping extra-time on the agenda.

[To watch the penalty shootout click on the screen below]

Fatigue threatened to take the needle out of both sides, just as a 100th-minute cross from Acuña caught the Porto backline out to allow Dost to sneak in at the back post, finishing past Vaná to give Keizer’s men the lead for the first time.

The Dragons were left facing a deep block for the remainder of extra time, breaking lines in the 110th minute via Yacine Brahimi’s slalom on the left, only for the Algerian playmaker to drag his strike high and wide on his weaker foot when approaching the goal.

Porto took the drama right up until the 11th hour, however, as extra-time subs Hernâni and Adrián Lopez combined with a cross and header across goal to enable Felipe to crash in with a last-minute equaliser, taking the tie to penalties.

Sporting were pegged back early in the shoot-out via Dost’s penalty against the bar, later reciprocated by Pepe’s strike onto the woodwork for Conceição’s outfit. Renan’s save versus Fernando Andrade set up the victory for Sporting in sudden death, claimed by Luiz Phellype for the Lions’ second piece of silverware of the season.

Well Porto losing to Sporting again to a shootout, its just meant to be, last time Sporting scored at the death to draw but won in the shootout and this time its the reverse but Sporting still won in the shootout. RIP Porto that must hurt and I believe most Sporting fans can agree Porto were the better side but were far too wasteful with their chances, how many corners did Porto have, was it 13 compared to Sporting's 1? Two times Porto hit the post? Sporting dug deep, scored both their goals against the run of play and hung on, even when Das Bost missed his penalty I still truly believed Sporting will still win and they did, got to feel a little for Porto, 2 points away from 1st place, and losing both Tacas and being embarrassed by Liverpool in the Champions League not a good year, given the fact they were the defending Liga Champions and losing two cups the way they did to a newly formed Sporting born from the Summer of Hell.

I'm not complaining as I support Sporting, one of the best seasons we had since Paulo Bento's time and it came from possibly one of the worst ending of a previous season lol

My man of the match had to be Jeremy Mathieu, he is easily the 2nd best player Sporting has after Bruno Fernandes, although he wasn't perfect in the game, Jeremy Mathieu was the difference for me, 7 years older than M. Marega and still last longer than him and went till the end is just amazing.

Sporting might not have great players in this team throughout but they remind me of Portugal in 2016, they just about do enough and have enough luck to go till the end.

Porto not the defending Liga Champions lol my bad

Sporting won both tacas. With Keizer getting a full season and pre season, we can build on this for next season.

Seeing Conceicao cry almost as good as seeing Sporting with the trophy.