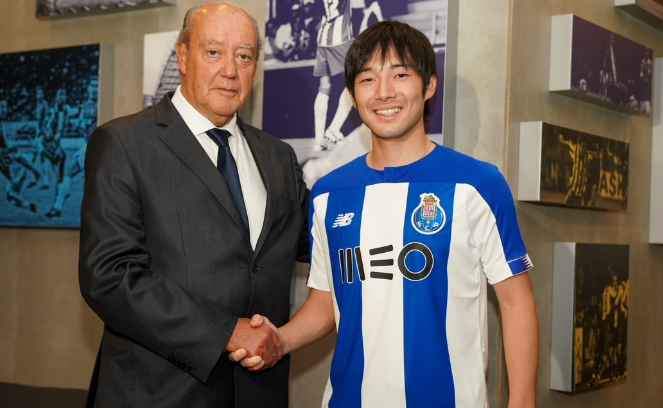 With or without an end-of-season collapse that saw FC Porto’s competitive rivals, Benfica and Sporting, overcome the Dragons with Primeira Liga and Taça de Portugal success, respectively, a period of transition had always been forecast for the ‘Blue & Whites’ ahead of the 2019/20 campaign.

Big-money sales, followed by further departures from contract rebels has left Sérgio Conceição’s gazing at a somewhat depleted squad. Reconstruction comes via the recent captures of Japan international Shoya Nakajima and Spartak Moscow forward Zé Luis, with more names bound to walk through the door at the Estádio do Dragão.

As the transfer machine continues to operate in full force on northern territory, PortuGOAL recaps what has so far been a hectic summer for outgoings and new arrivals in the Invicta city.

A series of goodbyes

Business started early for the team iconically fronted by club president Pinto da Costa, renewing the side’s close ties with Real Madrid with the sale of the ever-impressive Éder Militão after less than a year in Portugal, boosting Porto’s coffers by £45 million. The Dragons extracted a further £18 million from the Spanish capital via Felipe’s departure, as the Brazilian defender took to the opposite end of the city to sign up with rivals Atlético Madrid.

Joining Felipe at the Wanda Metropolitano is former skipper Héctor Herrera on a free transfer, having failed to agree a renewal with Porto. Hernâni is another to take his talents to La Liga, also on a free transfer, after tying up a deal with Levante, meanwhile the likes of Yacine Brahimi, Maxi Pereira and Adrián López all remain unattached upon the expiry of their deals with the Primeira Liga runners-up.

With Iker Casillas’ future as a professional still up in the air, the £2.5 million sale of José Sá, making his loan move to Olympiakos permanent, further intensifies the hunt for a potential new number one at the Dragão.

From Roger Guedes and Bruma to Gianluigi Buffon and Tomáš Koubek, the number of potential new arrivals associated with a move to Porto this summer can be described as nothing other than vast. The big catch thus far sees one name, Nakajima, finally put on the blue and white of Porto after the rumoured interest in the creative midfielder across past windows.

After dazzling in the Primeira Liga for Portimonense, accruing 33 direct goal contributions (goals and assists) in 42 league appearances, the Dragons’ new number eight arrives back in Portugal for £10.8 million, with former club Al-Duhail also retaining 50% of the value of any future sale made.

Despite being eyed up as a direct replacement for Brahimi, Nakajima’s versatility may well open up space for another left winger to star this season, as Conceição introduces Luis Díaz into his plans following his arrival from Colombian champions Junior de Barranquilla for £7.7 million.

Another imminent arrival is that of Ivan Marcano, returning to Porto after a failed stint in Italy with AS Roma, last season. The experienced central defender is likely to join for a fee in the region of €5 million, little more than 12 months after leaving Portugal on a free, where he’s now expected to form a pairing with fellow-veteran Pepe.

Renzo Saravia is the man elected to take over Maxi and Militão as the more conservative right-full-back option, making the jump to European football for a fee just shy of £5 million in his first full season in the Racing Club first team, eventually landing the defender a call-up to Argentina’s 2019 Copa America squad.

Concluding the arrivals thus far are defensive midfielder Loum, obliged to join permanently from Sporting de Braga, and Zé Luís, setting Porto back a further £7.65 million after hitting 25 goals and 22 assists in 85 Russian Premier League appearances for Spartak. The Cape Verdean bolsters options in attack at a time where rumours of a move to the Premier League for Moussa Marega refuse to go away, and Brazilian striker Tiquinho Soares in reportedly attracting interest from China.

Reoccurring success in the UEFA Youth League has served to alert everyone around the club of a youth set-up brimming with talent, with a series of names invited to make a splash with the first-team in the early stages of pre-season.

Despite reportedly being in the market for a new striker, the five goals tallied up by Fábio Silva in Porto’s Youth League-winning campaign has placed the 17-year-old’s name at the forefront, earning the tireless striker a new three-year-deal in the off-season.

The calls for first-team opportunities extend to Romário Baró, Diogo Costa and Tomás Esteves, but luck may be out for now for the already-famed defensive duo of Diogo Costa and Diogo Leite, with rumours of loan moves circulating after the anticipated capture of Marcano.

Bouncing back from temporary switches are Sérgio Oliveira, arriving from Greek champions PAOK, as well as Yordan Osorio and Galeno, who were able to star closer to home last season at Vitória de Guimarães and Rio Ave, respectively.

One name who wasn’t as fortunate was that of Fede Varela, impressing in the second Spanish division for Rayo Majadahonda - a campaign that sees the 22-year-old Argentine’s talents rewarded with a switch to La Liga, where he’ll represent Leganés in a third-consecutive loan spell since joining Porto.

Brandon
This comment was minimized by the moderator on the site

The Marcano deal seems to be a pretty polarizing one. A lot of fans on social media are making their opinions heard. There is a real calling to give first team time to the two diogos. I’m not sure how i feel. Marcano always impressed me when...

The Marcano deal seems to be a pretty polarizing one. A lot of fans on social media are making their opinions heard. There is a real calling to give first team time to the two diogos. I’m not sure how i feel. Marcano always impressed me when playing in a porto shirt, but he’s only getting older. And with pep closer to 40 than 30, im sure they will both need some down time, which could give the youngsters a chance after all. Only time will tell.

As for the rest of the transfers, I’m extremely excited to see young talent trickling in. Luis diaz and nakajima are two hugely talented players, while Saravia looks solid. I’m hopeful that Ze Luis will be another big body we can throw into the box when we need that late winner.

Read More
Brandon
There are no comments posted here yet