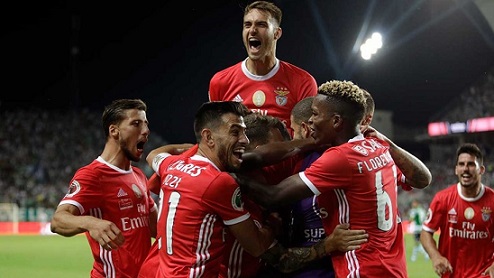 The close season is a peculiar time. Supporters are often told not to place too much emphasis on the results of pre-season matches, not to get carried away with a victory no matter how imperious and not to be too despondent with a loss, even against lesser teams.

Nonetheless, however many times supporters are reassured that pre-season is primarily an exercise for priming fitness and tactical discipline (which it is), it is hard not to feel positive about the campaign ahead if your side has been winning, and winning impressively, which is exactly what SL Benfica have been doing.

PortuGOAL reflects on Benfica’s positive pre-season and the indicators for 2019/20.

Benfica’s first pre-season match saw them take on RSC Anderlecht on 10 July, which they lost 2-1. A match so early in summer is about getting minutes in the tank and enabling new players to get a run-out, but in this case it also served to say goodbye to club legend Jonas, the Brazilian striker starting then leaving the Estádio da Luz pitch for a final time to a standing ovation in the 10th minute. The Lisbon side also blooded a host of youth products and new signings, one of them Chiquinho, the attacking midfielder recently signed from Moreirense, getting on the score sheet.

A thrashing handed out to Académica in the Hospital da Luz final three days later showcased Benfica’s ruthlessness whilst still managing to heavily rotate. At half-time and 3-0 up, Bruno Lage made 10 changes. Those 10 players managed to win the second-half 5-0, demonstrating the quality and strength in depth of this Benfica side.

The International Champions Cup was up next and provided Benfica with the opportunity to test themselves against some of the world’s elite clubs. A 3-0 drubbing of Guadalajara Chivas kicked things off, with new signing Raúl de Tomás getting on the scoresheet yet again. Next up was Italian side Fiorentina. The game was locked at 1-1 before another new signing Caio took his turn to make an impact, scoring a 93rd-minute winning goal. Benfica were winning matches but most importantly, looking fit and playing good football. The final match of the ICC is the one that ultimately sealed Benfica’s triumph as winners of the 2019 version of this lucrative pre-season tournament. A rejuvenated Adel Taarabt scored the only goal in a 1-0 victory against AC Milan.

The pre-season tournament was a success and regardless of the trophy’s significance, it will have been a nice moment for Benfica fans to see the club lift some silverware and find their name at the top of the table above many of Europe’s elite clubs.

As pre-season begins to wind down, managers make fewer and fewer changes and the games are treated as auditions for the inaugural day of the season. Lage will have already had an idea on his starting 11 for the match against newly-promoted Paços de Ferreira and as a result, the pre-season team selections closer to the kick-off of the season proper tend to resemble the starting XI for the first day.

The biggest ‘audition’ was yet to come, the Supertaça Cândido de Oliveira against cross-city rivals Sporting CP. Whilst still technically in pre-season, if you ask a Benfica supporter whether this showdown against the green-and-white of Sporting is just a friendly, you’ll soon realize the importance of this game. The Dérbi de Lisboa is never ‘just a friendly’, especially when it is the curtain-raiser for the Primeira Liga season and is watched by millions of fans in Portugal and all around the world. This match was the biggest indicator for Bruno Lage as to where his side are up to in terms of fitness, both physically and mentally. With just six days separating the match from the opening day of the season, Benfica needed to be up to speed and ready to go.

The result was something that could not have been predicted. Benfica took the lead on 40 minutes through Rafa Silva and went into half-time a goal to the good. Sporting had their moments but just couldn’t get the final ball right. The second-half, however, is where Benfica truly moved up the gears, hammering four goals past a hapless Sporting. Pizzi and Rafa Silva continued to showcase their electric partnership, taking turns as scorer then provider for each other’s goal. Grimaldo belted in a fantastic free-kick on the right-hand side of the box with his trusty left foot, Pizzi grabbed himself another on 75 minutes before Chiquinho added a final sucker-punch in stoppage time. Benfica 5-0 Sporting.

The result may say more about the current state of Sporting than it does the dominance of Benfica but the chasm in class between the teams will naturally fill Benfiquistas with optimism and excitement. This year’s pre-season has showcased the strength in depth of the current Benfica squad, the ruthlessness to punish teams when attacking and the tactical discipline to defend well and keep clean sheets.

It is a very exciting time for Benfica under Bruno Lage, a young coach who seems to have the Midas touch. Benfica have won the Portuguese championship in 5 of the last 6 seasons, and they start 2019/20 strong favourites to make it 6 from 7, with hopes also high of rectifying recent poor showings in the Champions League.

I think that at the time of writing, Benfica start the new Liga season as clear favourites to win the league and retain their title. We have the strongest squad on paper and the most impressive coach of the top 3 teams in Portugal. However, as we...

I think that at the time of writing, Benfica start the new Liga season as clear favourites to win the league and retain their title. We have the strongest squad on paper and the most impressive coach of the top 3 teams in Portugal. However, as we all know so well, this is a sport in which (thankfully) the favourites don't always win. As ever, everything will be decided on the pitch over the course of 10 months, rather than in theory.

The main reason why we are favourites for the Liga title is our attacking prowess. This pre-season seemed to show that this squad looks full of goals, as it was last season. And when you score so many, you are likely to win most matches. Despite the loss of Felix and Jonas, the attack looks just as potent with De Tomas and Vinicius looking like good replacements for them. Seferovic was of course the top scorer in the league last season, and we also have a goalscoring threat from the wings and midfield from the likes of Rafa, Pizzi, Chiquinho etc...

However, I'm a little concerned about the defence after seeing most of the pre-season games. The defence didn't seem weak as such, but it certainly looked like there was room for improvement. Only the great saves of Vlachodimos saved us from conceding quite a few goals in some of the matches, particularly against AC Milan and against Sporting in the super taca. I think the main focus for Bruno Lage for the start of this season is to improve the defence and to diminish the goal-scoring chances we offer to opposition. If the defence can get more solid, then we will be odds-on favourites to retain our Liga title. But again I say, only in theory. Everything will be decided on the pitch. Let's see how it all materialises...

I thought Benfica would win too but now that Bruno Fernandes looks to be staying at Sporting I am not so sure.

Keizer played an experimental formation in the super cup and it didn’t work out. I was away on a business trip this week so I...

I thought Benfica would win too but now that Bruno Fernandes looks to be staying at Sporting I am not so sure.

Keizer played an experimental formation in the super cup and it didn’t work out. I was away on a business trip this week so I rewatched the game in my hotel room. The 5-0 score was harsh.