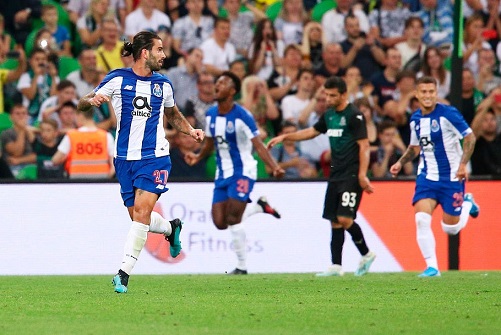 Portugal’s club sides have made an excellent start to the new season in European competition with FC Porto, Braga and Vitória de Guimarães all winning away from home. Porto beat Krasnodar in Russia thanks to a late strike by Sérgio Oliveira to edge closer to the competition proper.

In the Europa League late goals were also needed in Denmark as Braga built a 4-2 lead versus Brondby, but there was no need for drama for Minho neighbours Vitória who swept aside Ventspils 3-0 in Latvia.

All three clubs look virtually assured to make the next phase – the playoffs – which is the last round before the group stage of the respective competitions.

FC Porto got their season off to a positive start with victory in Russia in the first leg of their Champions League qualifier. A late Sérgio Oliveira goal direct from a free kick gave the Dragons a 1-0 win against Krasnodar, putting Porto in a strong position to reach the playoff.

Coach Sérgio Conceição pulled a surprise before kick-off by leaving Shoya Nakajima out of the starting XI, the expensive Japanese star not even on the bench. Recently contracted Argentine goalkeeper Augustin Marchesín and teenage midfielder Romário Baró, who has impressed in preseason, were given their full debuts.

The visitors spurned a golden opportunity to take an early lead when Oliveira’s defence-splitting pass sent Moussa Marega clean through on goal in the 13th minute with just goalkeeper Safanov to beat, only for the Malian striker to scuff his shot wide.

That was the closest either side came to scoring in the first half of a game of few chances. Porto were in control for the most part but did not force the issue, while at the back the experienced centre-back pairing of Pepe and Marcano dealt with the Russian threat without great alarm.

In the 80th minute, however, a neat move set up Cabella who fired a first-time shot towards the roof of the net, Marchesín producing a superb reflex save to deflect the ball over the bar.

By then new Porto signings Zé Luis and Luis Díaz had been thrown into the fray, and the former won a free kick on the edge of the box in the 88th minute. Oliveira stepped up and curled a peach of a shot over the wall and into the net to give the Blue and Whites a precious advantage to take into the second leg at the Estádio do Dragão next Tuesday.

“We haven’t won anything, the tie is at the halfway stage and the second leg will be tough,” warned Conceição post-match, adding that “no player gets in the team just because they cost millions or just because they came through the youth ranks,” by way of explanation for the absence of Nakajima and Tomás Esteves from the 18-man squad.

Should Porto make progress, they will play the winner of the tie between Greek giants Olympiacos, a team with a strong Portuguese presence starting with coach Pedro Martins, or Turkish outfit Istanbul Basaksehir. 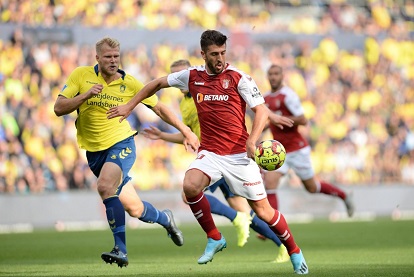 New coach Sá Pinto took his bow in the Braga dugout and things got off to a bad start as first Wilczek had the ball in the net in the opening minutes, only for the goal to be ruled out for offside but the visitors did not heed the warning. To be fair there was little to be done on 15 minutes as Kaiser sent a sensational cross-shot rocketing into the top corner. 1-0 to the hosts.

Braga reacted swiftly to the setback, scoring twice in two minutes midway through the first half to turn the result around. First Paulinho rose well to head in, then André Horta took advantage of a crass mistake in the Brondby defence to put the Portuguese side ahead. With the hosts wobbling, Ricardo Horta and Wilson Eduardo missed chances to extend Braga’s lead.

The Danes regrouped and came out strongly in the second half. Braga goalkeeper Matheus did well to spread himself and stop an initial attack, but Braga could not snuff out the danger soon afterwards, with Kaiser scoring his and his team’s second to level the match.

With the game drifting into stoppage time it seemed Braga would have to settle for a draw, but an excellent jump and knock-on by returning Egyptian forward Hassan sent Ricardo Horta racing clear on goal, with the Portuguese midfielder coolly finishing to trigger jubilant celebrations on the Braga bench.

The joy was soon amplified among the Arsenalistas as with practically the last kick of the game Hermannsson turned the ball into his own net to give Braga a 4-2 win. Should Pinto’s men finish the job next Thursday, they will likely play Spartak Moscow in the playoff after the Russians beat FC Thun in Switzerland. 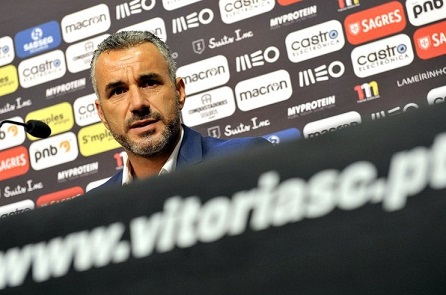 After dispatching Luxembourg outfit Jeunesse Esch 5-0 on aggregate in the previous round Vitória Guimarães were expected to have a tougher time of it against Latvian side Ventspils. Truth be told, Ivo Vieira’s team as good as booked their place in the playoff after a 3-0 victory in the first leg in Eastern Europe.

Both sides crashed efforts onto the bar and both goalkeepers pulled off some excellent saves in an open and entertaining game, but the Portuguese team came out on top thanks to some impressive finishing.

Davidson’s towering header from a fizzing Rochinha cross gave Vitória the lead on the half-hour mark, and a wonder 25-metre strike from Pepe doubled the lead five minutes after the interval. Joseph Amoah put the icing on the cake, taking advantage of a scramble in the box to make it 3-0.

With the second leg a mere formality, Vitória can start preparing for a playoff tie against either FCSB of Romania or Mlada Boleslav of the Czech Republic.

After a series of largely disappointing seasons in Europe, the positive results so far for Primeira Liga teams gives Portugal a good platform to rack up ranking points and attempt to rise up the country coefficient table, which directly affects how many club sides get to play European football and ensures entry at a later stage in the coming seasons.

Given the strong start, overtaking Russia to reclaim 6th place by the end of the season looks a reasonable goal.

I love Portuguese clubs doing good in Europe. Keep it up!