Porto shocked in season opener prior to big wins for Benfica and Braga, as Sporting are held to a draw 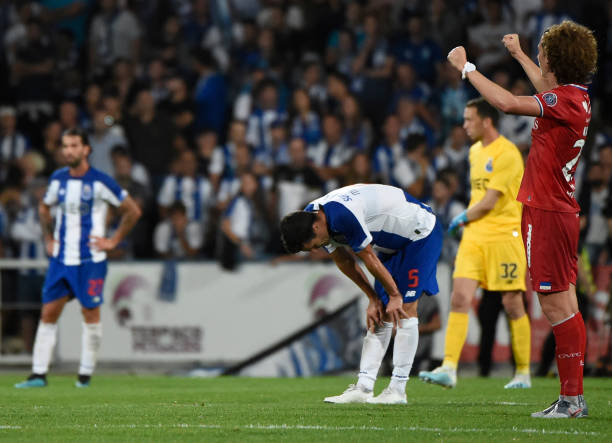 FC Porto stumbled into the new season with an away defeat to Primeira Liga newcomers Gil Vicente on Saturday, shortly before Benfica kicked off their defence of the Liga NOS title with a 5-0 victory against Paços de Ferreira, also up from the second division.

The Dragons went into the final quarter of an hour at the Cidade de Barcelos stadium with the game locked at 1-1, enabling Bozhidar Kraev to land the killer blow in a priceless 2-1 win for Gil Vicente.

In Lisbon, Bruno Lage’s men rose to the occasion at the Estádio da Luz with goals from Nuno Tavares, Pizzi, Haris Seferovic and Vinicíus, tallying up a second consecutive 5-0 victory in a blistering return to competitive football.

Elsewhere, Sporting could manage nothing more than a point in their visit to Madeira, drawing 1-1 with Marítimo, meanwhile Sporting de Braga made their league debut with a 3-1 win at home to Moreirense. PortuGOAL brings you all the action from the opening day of the season.

Following a summer filled with ins and outs, Porto commenced their latest cycle against Vitór Oliveira’s Gil Vicente, making a comeback to top-flight football after years of legal disputes to reinstate the club in the Primeira Liga.

The hosts weren’t to be taken lightly, thwarting Sérgio Conceição’s side in a tight and goalless first half of football in the city of Barcelos, helped on by an impressive double-save from Augustín Marchesín to keep Porto from conceding.

There was little the new arrival between the sticks could do in the second half, however, with Lourency racing through on goal and providing enough bend behind his shot to find the bottom-left corner, giving Gil Vicente the lead in the 60th minute.

The chance for Porto to begin to right the wrongs came in the 73rd minute, following a handball inside the box that enabled Alex Telles to get off the mark from the penalty spot and equalise for ‘the Blue & Whites’.

But Porto were left stunned no less than four minutes later, with Lourency again causing all the issues and fizzing pass into Kraev's path before the Bulgarian found the back of the net inside the box, gifting the Dragons their first opening-day defeat since 2001.

In their bid to claim back-to-back league titles, Benfica welcomed Paços de Ferreira to the Estádio da Luz, as well as the Primeira Liga, as they aimed to avoid the same fate suffered by Porto in Barcelos. 26 minutes in, the red half of Lisbon were left hailing a new hero after Nuno Tavares, shaping a shot on his favoured left foot to give Benfica the lead with a curling effort from range.

By the half-hour mark, Benfica we’re celebrating a second goal via Pizzi from the spot, with the prospect for more joy in front of goal opening up following Bruno Martins’ second-half dismissal. Seeking an immediate impact off the bench, Chiquinho was on hand to set Seferovic up for the Eagles’ third of the night in the 73rd minute.

A cute dink from Tavares to Pizzi saw the latter grab the fourth from a tight angle in the 74th minute, moments before the young full-back could create another with a low-cross through to Vinicius lurking in at the back-post, bringing a 5-0 victory to a close.

The appetite for this season’s first game would’ve been bigger had it not been for last week’s Supertaça debacle from Sporting, versus Benfica, as they looked to bounce back at a ground that’s left them winless in each of their last three meetings versus Marítimo.

Marcel Keizer’s men couldn’t have asked for a more demoralising start to proceedings as Jhon Cley got the better of young Thierry Correia down the left channel, driving a low cross directed at the back post for Getterson to crash in after nine minutes of football.

Sporting talisman Bruno Fernandes was the architect of the Lions’ response in the 28th minute, swinging in a cross for Sebastian Coates to meet and equalise with his head.

The momentum remained with the visitors who were a whisker away from turning the game on its head just three minutes later via Raphinha, receiving a spare ball on the edge of the box before driving his venomous shot low and wide of Charles’ goal.

Both sides went toe-to-toe with opposing philosophies in the second period in hope of undoing the 1-1 score-line. The honours of doing so nearly fell to Marítimo’s summer arrival Daizen Maeda, popping up at the back-post with little more than 15 minutes to go to glance a diving header onto the woodwork, meanwhile Raphinha’s shooting boots continued to desert him at the other end.

The Madeiran outfit came knocking once more in the 84th minute, taking advantage of a dazed Sporting defence to fire an effort on the volley through Jhon Cley inside the box, floating wide with danger. Both Raphinha and Daizen shared moments at either end in an enthralling finish to the night but there'd be no separating the two sides prior to the referee's final whistle, concluding a 1-1 draw.

Under the guidance of Ricardo Sá Pinto, Braga were out to rediscover the recipe that made them look like early contenders for the Primeira Liga title last season, as the fixture machine matched 'the Arsenalistas' with the surprise package of the last campaign - Moreirense.

Braga kept their visitors quiet throughout large periods of the first half but it wasn’t until the brink of half-time that the hosts made their dominance count, taking the lead through Fransérgio following Claudemir’s low cross.

Hassan marked his return to Portuguese football with a crucial second goal for his club in the 64th minute, pouncing onto a loose ball afforded to the Egyptian from Steven Vitória‘s slip inside the six-yard-box before picking his spot with a close-range finish.

The moment of the night was reserved for Angola international Wilson Eduardo in the 77th minute, cutting inside on his favoured right foot before curving in his shot into the far corner and sealing a winning start to the season for Braga, blemished only by a late Nenê goal for Moreirense to make it 3-1 at full-time.

Benfica understandably looked a bit rusty through much of the first half, but the result was never in doubt.

Nuno Tavares is clearly more comfortable on the left, but when he picks the ball up in the final third, he has the vision and technique...

Benfica understandably looked a bit rusty through much of the first half, but the result was never in doubt.

Nuno Tavares is clearly more comfortable on the left, but when he picks the ball up in the final third, he has the vision and technique to play inch perfect crosses with both feet.

After showing great promise against Sporting, the Seferovic-RdT partnership didn't look anywhere near as sharp against Paços. Nevertheless I am confident that the two of them will develop a strong understanding with time.

Chiquinho is quite the player. Not as flashy as some of the other playmakers in the league but his football IQ, vision, and end product are top notch. I have no doubt that he'll prove an excellent acquisition over the course of the season.

Porto looked really poor against a well-organized and industrious yet technically limited Gil Vicente side. The likes of Tiquinho, Bruno Costa, and Manafá are simply not good enough for a club like Porto. Even the likes of Sergio Oliveira, Marcano, and Zé Luis aren't Porto's best players in their respective positions.

The extremely one-dimensional cross and set-piece heavy 4-4-2 was figured out in the 2nd half of last season but Conceição seems unwilling or perhaps incapable of changing their style of play.

Nalajima is their most creative player but he remains on the bench. Fábio Silva may only be 17 but he's by far Porto's most dangerous striker. Romario Baró, Diogo Leite, and Esteves could also force their way into this average Porto side. The talent, especially the young talent, is there but I highly doubt Conceição is the manager Porto need to get the most out of their talent.

Sporting are an absolute mess the moment. I honestly don't see Keizer lasting until Christmas, and if Bruno Fernandes is sold, they may not even make the top 3.

Braga have a decent squad with some interesting players but I've never been a fan of Sá Pinto as a coach.