PortuGOAL Figure of the Week: Nuno Tavares lights up the Luz with dazzling debut 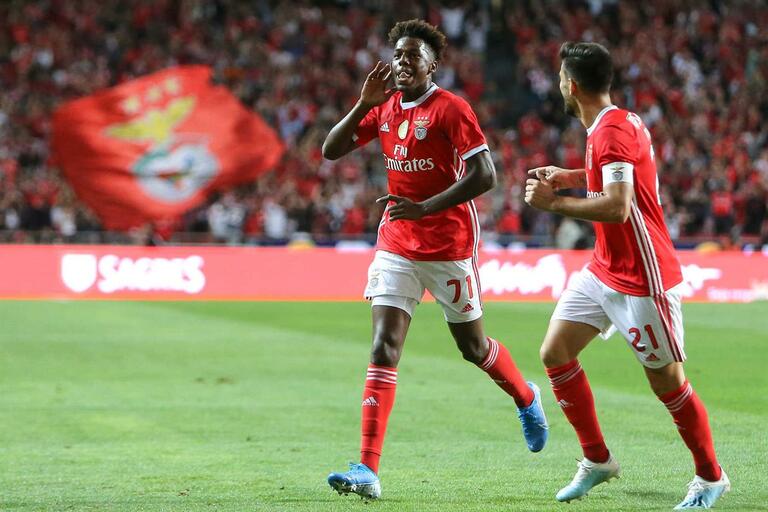 Liga NOS returned for another season last weekend with no shortage of headline moments. There were contrasting emotions not only for the “big three” but also the promoted trio. Gil Vicente produced a stunning upset to beat Porto, Famalicão celebrated their return to the top flight with victory over Santa Clara, but Paços Ferreira were dealt a harsh lesson by Benfica.

The latter saw a standout performance from what could Portugal’s latest young star in what is proving a burgeoning conveyor belt of talent. 19 year old fullback Nuno Tavares is PortuGOAL’s first Figure of the Week of the 2019/20 campaign after an electric display at Estádio da Luz.

Tavares has made the step up to the Benfica senior side this season having represented the B team on 13 occasions last season. The youngster could have been forgiven for thinking his chances would be limited under Bruno Lage but he has taken advantage of a shortage in right back with André Almeida and Tyronne Ebuehi struggling for fitness, to impress in pre-season.

To these ends, Tavares was named in the starting XI for both Benfica’s opening league match against Paços on Saturday, as well as in their Supertaça triumph over Sporting last week. At times in the latter he looked a little uneasy, albeit tasked with shackling a wide-stationed Bruno Fernandes for much of the game. However a far more assured performance followed as like Sporting, Paços were blown away by the rampant defending champions.

Tavares himself started the rout in sensational style. After collecting Pizzi’s layoff, the right back took one touch before unleashing a stunning effort from distance with his favoured left foot to beat Ricardo Ribeiro’s despairing dive.

The attacking wide positions that Tavares was taking up throughout were causing Paços all manner of problems, and this was only exacerbated after Bernardo Martins’ clumsy dismissal for the away side. Benfica had already made it 2-0 through Pizzi’s penalty before the red card, and they increased their lead further through Haris Seferović in the 70th minute.

Tavares played his role again, drifting in from the flank and showing good strength and skill to pick out Chiquinho, who in turn squared for the Swiss striker to open his account for the season. Tavares played a more prominent role in goal number four, again linking up with Pizzi to brilliant effect. This time the right back turned provider, clipping a delicate through ball for the skipper, who fired past Ribeiro for his second of the match.

In the 84th minute Benfica rounded off proceedings by notching the fifth. Tavares was instrumental, grabbing his second assist as his whipped cross found Carlos Vinícius lurking at the back post for his first goal for the club.

Consecutive 5-0 victories for Bruno Lage’s side have sent out a considerable message to Benfica’s rivals and already instilled them as heavy favourites to keep their league crown this season, particularly having gained ground in the table on Porto and Sporting after only one week.

There remains a long way to go though, as there is in Nuno Tavares’ career, but the 19 year old’s potential mirrors that of his side. First choice right back André Almeida has been tentatively tipped to recover fitness in time for the first Clássico of the season against Porto later this month, but on this form it will be a selection headache for the manager come Jornada 3.

I've been really impressed with how well he has played as an emergency make shift right back. He is far more comfortable using his right foot than most left backs but it is never easy to switch sides as a fullback, especially when it comes to...

I've been really impressed with how well he has played as an emergency make shift right back. He is far more comfortable using his right foot than most left backs but it is never easy to switch sides as a fullback, especially when it comes to defending.

I expect Andre Almeida to regain his place in the starting 11 when he's fully fit but at least we know we have an excellent alternative at both full back positions should one of Grimaldo or Almeida need a day off.