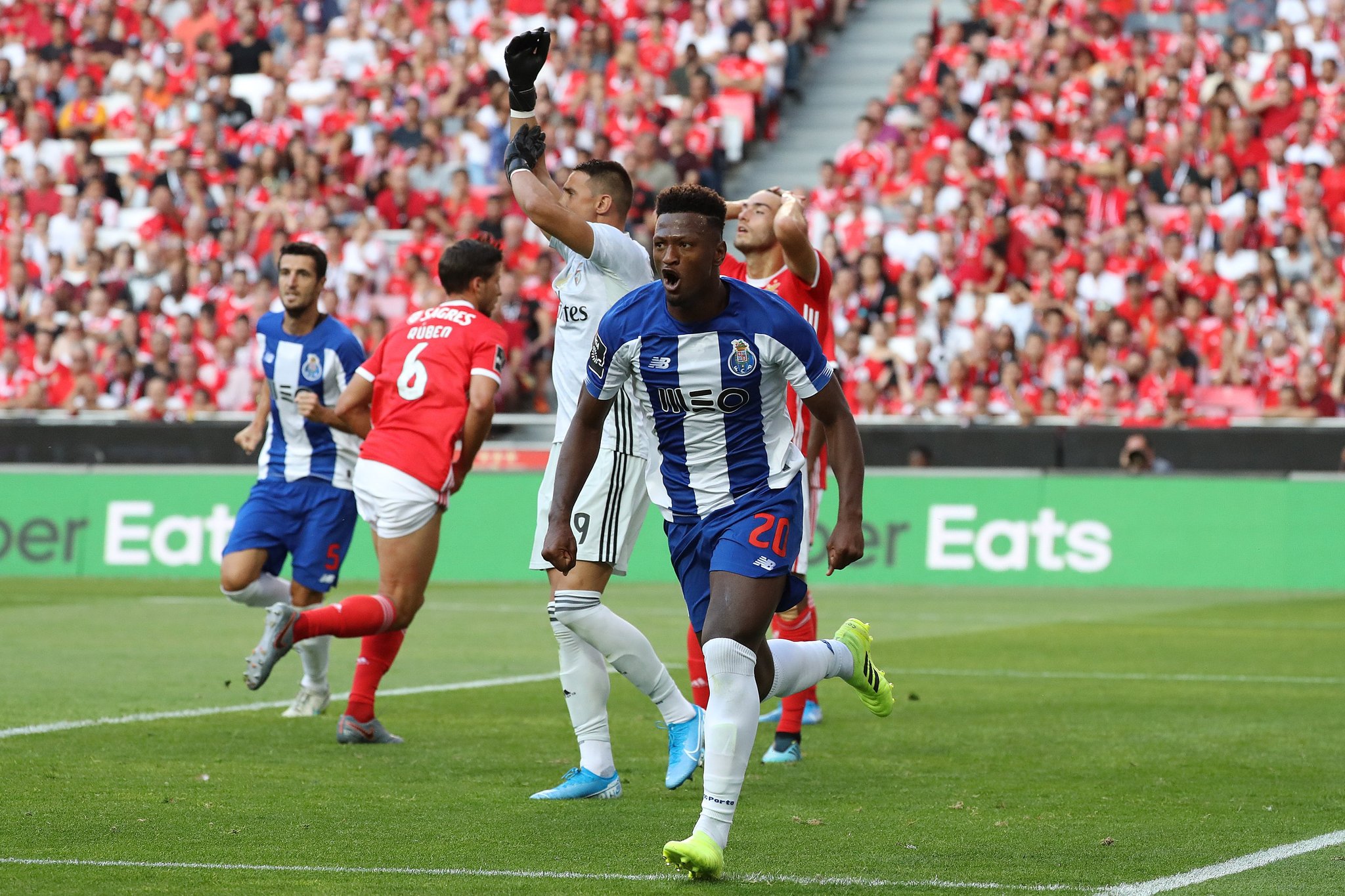 Porto gave the fledgling Liga NOS title race a shot in the arm with a superb 2-0 win over arch rivals Benfica at Estádio da Luz.

Strikers Zé Luís and Moussa Marega supplied the goals in an excellent team display from the Dragons at the home of the unusually flat defending champions.

Both sides unsurprisingly named unchanged XIs from their convincing wins last weekend. Benfica came into the match in frightening form, with three competitive wins on the spin without a goal conceded. Porto on the other hand have experienced a far rockier start to the campaign, losing to promoted Gil Vicente and also exiting Champions League qualifying at the hands of Krasnodar.

As is often the case in these high pressure encounters, the opening exchanges were cagey and scrappy in an electric atmosphere in Lisbon. Benfica left back Álex Grimaldo saw one of the first sights at goal, a dangerously placed free kick went tamely into the wall however, and Porto quickly countered to go close through Luís Diaz.

In the 21st minute last week’s hat-trick hero Zé Luís spurned a great chance to break the deadlock as Odysseas pushed his effort aside. He and Porto did not have to wait long before establishing the lead though, as from the resulting corner the Cape Verdean pounced on a defensive mixup between Ferro and Rúben Dias to bundle in the opener from close range.

Benfica were really struggling to impose their usual free-flowing game upon Porto and this dynamic never really altered against Sergio Conceicao’s disciplined outfit. The excellent Diaz tested Odysseas with a well struck volley early in the second half as Porto continued as the stronger team after the break.

The match should have been out of sight in the 78th minute though, Moussa Marega had the freedom of the pitch and all the time in the world one against one with Odysseas, but contrived to put his shot wide of the post.

Eight minutes later though Marega made up for his miss to seal a huge three points for Porto. The Malian latched onto substitute Otávio’s through ball, outpaced Ferro and coolly slotted in off the post to make it 2-0.

Defeat was the first of Bruno Lage’s tenure with the senior side, and has seen Porto and Benfica draw level on points after 3 league rounds. The home side really struggled throughout the game, Pizzi failing to impose himself upon the game and the young centre-back pairing of Ferro and Dias looking shaky.

For Porto there were a number of standout performers: Pepe used all of his experience to keep the defence organised, Jesús Corona excelled in a deeper right-back role, while Matheus Uribe continued what has been a seamless transition to Porto’s midfield.

The first league clássico is done and dusted and an intriguing title race could well be on our hands.

Congrats to Porto on their well deserved victory. They didn't create much from open play but their defensive discipline and tireless work rate turned the match into a scrappy, hard-fought game of 50-50 duels and long balls up to the center...

Congrats to Porto on their well deserved victory. They didn't create much from open play but their defensive discipline and tireless work rate turned the match into a scrappy, hard-fought game of 50-50 duels and long balls up to the center forwards which undeniably suits Conceição's style to perfection.

Pepe in particular rolled back the years with a dominant performance. Danilo also deserves a great deal of credit for ensuring that Rafa was never able to receive the ball into space in between the lines. Baró, Diaz, and Uribe also put in excellent shifts especially off the ball.

Seferovic was awful for the 3rd game in a row and it's becoming increasingly clear that RdT needs to be operating as the 9. Give Chiquinho or Jota a start as the 10.

The title race is back on and with a win tomorrow Sporting could find themselves all alone in first place! There's still plenty to play for and I have no doubt that Bruno Lage will learn from his mistakes and get this team back on track.

Surprised Portugoal didn’t shut down and declare a day of mourning.

Tomorrow sporting will get to the top where they belong .

The stats show 50-50 possession, but this was a dominant Porto performance. Benfice created nothing and were snuffed out of the game entirely.

The entire Porto team finally played to their potential and showed that Benfica may have a few...

The stats show 50-50 possession, but this was a dominant Porto performance. Benfice created nothing and were snuffed out of the game entirely.

The entire Porto team finally played to their potential and showed that Benfica may have a few talents here and there, but their defense is suspect.

Lage is no doubt a good manager, but it will be interesting to see how he deals with adversity after this game.

Baro, Diaz, Pepe, Luis Felipe and Danilo were stars in this game. I've been critical of Conceicao and I still think he gets a lot wrong tactically but today he was flawless. I applaud him.

Sporting will probably draw tomorrow. Let's see if Benfica can bounce back and reclaim their top spot.

A deserved victory for Porto in a game where they gave everything and seemed much more up for it, and Benfica fell way short of their capabilities. The match turned out in the style Porto thrive in: physical, stop-start, and a lot of balls in the...

A deserved victory for Porto in a game where they gave everything and seemed much more up for it, and Benfica fell way short of their capabilities. The match turned out in the style Porto thrive in: physical, stop-start, and a lot of balls in the air and direct play. Porto's two goals were typical goals they have scored under Conceicao, one from a corner and one from a direct ball forward to the on-running striker. Benfica were simply not able to dictate the match to being how they like a match to be, more free flowing with the ball primarily on the floor, and it was just a poor performance, bad day at the office, so no complaints about the final result.

Bruno Lage has done superbly well up to this point of course, but I think he got his selection and tactics wrong last night. It has been pretty clear that the Seferovic-De Tomas front 2 is taking time to gel, they are both primarily number 9's. One of them should have been dropped last night, for the more dynamic and clever offensive movement of Chiquinho, especially with both Porto's CBs being well over 30 and not the quickest. Furthermore, he played with two 6's in midfield again in Florentino and Samaris. Against weaker teams that may work, but against a stronger team like Porto we needed someone to move the ball forward in midfield. So basically playing with two 6's in CM and two 9's up front, we had no link up centrally between the centre of midfield and attack. It improved a little when Taraabt came on in the second half, and I'd definitely prefer the Moroccan to start in midfield over one of those two 6's until either Gabriel or Gedson recovers from their respective injuries.

Anyway Benfica had been on an amazing run of victories and a bad result will always inevitably arrive. The important thing is to move on quickly. This result doesn't change the fact that Benfica still have the strongest squad, with the most potential, in the league and I fully expect us to bounce back against Braga next weekend. But I repeat there are some issues that need to be rectified for Lage, and were made clear last night. Primarily, you can't play with two 6's and two 9's. You need that central link up between CM and attack, so I think Lage simply has to drop one of the 6's and/or one of the 9's. Hopefully he has learned from last night's errors and we quickly move on....

Disappointing result from Benfica. Porto had the game controlled and had it played to their tune the whole night. Porto were so much more hungry than Benfica were and it showed in every play.

Pepe showing why he is one of the best CB’s. He was...

Disappointing result from Benfica. Porto had the game controlled and had it played to their tune the whole night. Porto were so much more hungry than Benfica were and it showed in every play.

Pepe showing why he is one of the best CB’s. He was a monster all night. Had any player in the attack in his pocket. An experienced CB in defence is often a very important thing to have and Benfica showed what lacking that may do.

Reality is there is no arguing this result. Benfica created almost nothing. Porto created a few opportunities and capitalized. They controlled the tempo, and the kind of play that pursued. Benfica played the way Porto wanted them to.

Tbh I don’t think much of Conceicao as a coach in tactics, but his plan for last nights match was flawless. Add that to Portos will to win and they had a recipe for success.


Chiquinho our injured is a worry, I believe he was the man that should have been given a chance to take Seferovic place for a while as the striker pair atm isn’t clicking. With him out injured, I guess Lage will stick to those two.
Glad André Almeida is back from injury, people can say what they want but he was a quality right back. Secure in defence and has grown into a good offensive support option as well. He was missed last night imo.

Long season to go still, and I do believe Benfica have what it takes to win it. Caution though, With porto our of the champions league, they will put far more emphasis on the league, don’t expect them to drop too many points this season

Hopefully sporting and Braga can keep up with the race for a while to keep things interesting, but my optimism for that isn’t as strong, especially when it comes to Sporting

Rogério
This comment was minimized by the moderator on the site

good thing conceicao didnt read projections for the game, he wouldnt' bother to even show up!!!

_Z-,
I'm a fan of Sporting too. I just know that my club's nature is to settle for second or third. As a fan, I've accepted that.