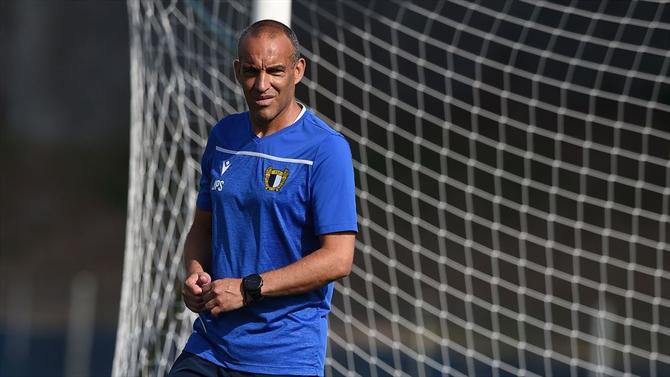 The final round of Liga NOS before the international break saw penalty drama at Estádio José Alvalade as Sporting lost a close encounter with Rio Ave, Porto carried on from last week’s clássico win by beating Vitória Guimarães, while Benfica responded to the aforementioned high profile loss with an important victory over Braga.

However the standout result, and indeed the standout team this season so far, has to be Famalicão. The promoted side have recorded a superb start to the campaign, unbeaten after 4 matches and sitting top of the division. Coach João Pedro Sousa masterminded another triumph this weekend in a 3-2 success at Aves. He is PortuGOAL’s Figure of the Week.

After finishing in second place in the second tier last season, Famalicão prepared for their first season back in the top flight since 1993/94 by instigating wholesale changes among both the playing and coaching staff. For the latter, 48 year old João Pedro Sousa was recruited to lead the newly-assembled squad to compete in Liga NOS.

The Angolan-born Portuguese Sousa previously only had experience no higher than assistant manager level. He was hired this summer are being Everton boss Marco Silva’s right-hand man throughout Silva’s career in England, Greece and Portugal, so this represented a risk for both the club and the individual.

However Sousa has started the season serenely, confounding expectations particularly in the face of a tough opening gambit of fixtures. In their first league match, Santa Clara were safely negotiated past without conceding a goal, and similarly they kept a clean sheet in defeating Carlos Carvalhal’s Rio Ave on Matchday Two. Their only dropped points so far were in what is always a very tricky trip to last season’s 5th place side Vitória Guimarães, and even at the Dom Afonso Henriques stadium the team were impressive in gaining a 1-1 draw.

Sousa has imbued the team with an attacking style much in the mould of his former stablemate Silva, a well-balanced 4-3-3 so far paying real dividends. Talented young defenders Nehuén Pérez and Patrick have formed a solid central defensive partnership, the youthful pairing of Gustavo Assunção and Pedro Gonçalves have kept things tight in midfield while the manager has given creative wingers Rúben Lameiras and Fábio Martins licence to express themselves in attack.

That said, Famalicão and Sousa did not have everything their own way in Saturday’s win at Aves. After taking an early lead through Pérez, the team were brought down to earth with a double whammy as Lionn was sent off for a professional foul, and Aves equalised from the resulting free kick through Mehrdad Mohammadi.

Being a man down did not curb Sousa’s attacking mindset for his team though, and they re-took the lead in the second half as Martins scored from the penalty spot after Toni Martínez was brought down by Adi Mehremic.

Sousa replaced a physically struggling Martínez with Brazilian forward Anderson soon after, and the substitute scored what would prove the decisive goal with four minutes remaining, beating Quentin Beunardeau with a superb strike.

Mahmoud Kahraba pulled one back for the hosts but Famalicão saw the game out to add their 10th point from a possible 12 in what has been a terrific start to the campaign.

Sousa has been backed a lot in being able to bring in a number of players to the squad, and his recruitment business has been ongoing with recent additions Vaná and Roderick Miranda further boosting options, as well as the club being backed by an excellent fanbase. The young boss won’t be getting carried away by the European qualification talk that is beginning to surround Famalicão, with securing their top flight status surely the number one objective for now, but on current evidence they will be keeping their focus on the top half of the standings at least, rather than lower reaches the Liga NOS table.