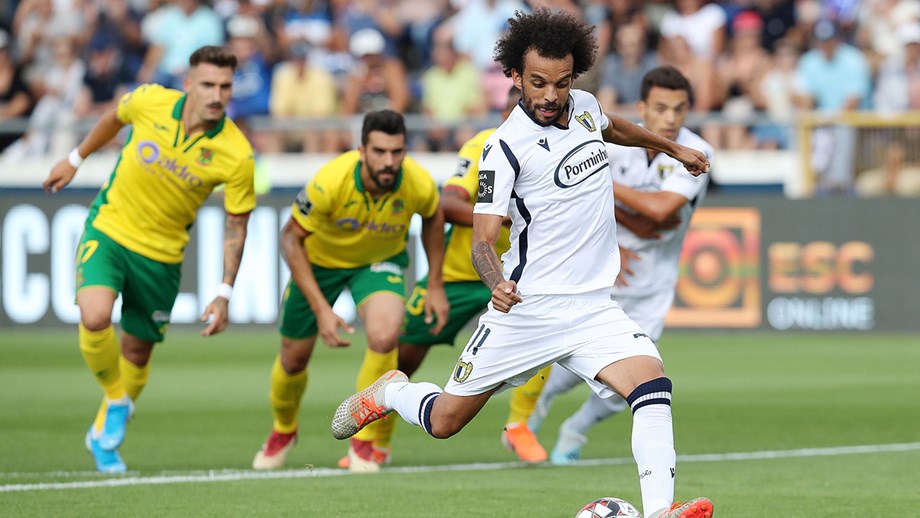 Liga NOS returned with a bang after the international break with 34 goals scored in the 9 matches over the weekend. Vitória Setúbal began the gameweek by upsetting Braga, Tondela and Belenenses secured impressive away wins over Rio Ave and Marítimo respectively, while Benfica and Porto kept up the pressure on unlikely leaders Famalicão, whose brilliant start to the season continued as PortuGOAL Figure of the Week Fábio Martins inspired them to victory over Paços Ferreira.

Upon their promotion to the top flight Famalicão made a large number of changes among the playing staff, including bringing in Primeira Liga-experienced players such as 26 year old Fábio Martins, signing on loan from Braga for the season.

Martins seemed a brilliant signing on paper for the newly-promoted side having particularly excelled at a similar level a couple of years back with Chaves in Liga NOS, and he has certainly wasted no time in backing up this theory.

The Portuguese is best stationed on the left wing, utilising his ability to run with the ball and cutting inside onto his favoured right foot. He can drift centrally too, with an eye for a pass among the strengths in his arsenal.

He started the campaign running the show in the opening day win at Santa Clara and his good form has remained ever since. He got the ball rolling in Saturday’s win in just the 6th minute, converting from the penalty spot for the second game in a row after Pedro Gonçalves was felled in the box.

Famalicão had control over Paços and doubled their lead in the second half with Martins central to the goal. On the hour mark, he dribbled from just inside the opposition’s half, defenders unable to get near him, before laying the ball off for substitute Guga to smartly finish into the corner.

Seven minutes later Martins had his second, yet again drifting in from the left to eventually find space for a shot on his right foot from the edge of the area, his powerful effort beating Ricardo Ribeiro to make it 3-0.

Pedro Gonçalves added a fourth before substitute Douglas Tanque scored a late brace to add a little more respectability to the scoreline for the away side, but ultimately the league leaders’ attacking prowess, led by Martins, was too much for Paços.

We are only 5 matches into the new season but Famalicão have been the standout team and Fábio Martins has been the star player. A very impressive return of 4 goals and 3 assists from the wing for him so far, Famalicão will be looking to tempt Braga into a permanent sale as soon as possible on current evidence.

Famalicao has already done enough to stave off relegation.