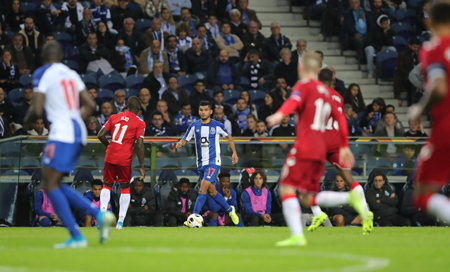 Porto and Rangers fought to the end in a 1-1 draw at the Estádio do Dragão which leaves both clubs alive in the UEFA Europa League. A Luis Díaz screamer gave the Portuguese club the lead, Alfredo Morelos equalised for Rangers before the break with both teams squandering opportunities to take all three points.

Agustin Marchesín 7 - Was left high and dry for Rangers’ equaliser in a first half where the Argentine goalkeeper had little to do. Made a miraculous save on a close range Morelos header in the second half to keep the scores level.

Pepe 6 - Used his experience and composure to keep Porto organised until a minute before the break. Made some important clearances and took one for the team when he brought down Morelos on the edge of the area.

Ivan Marcano 6 - Swept up the danger well enough and went close to creating a winning goal from a late Alex Telles corner.

Jesus Corona 6 - Showed good speed get back and prevent an early Rangers counter attack and delivered a cross that Zé Luís headed wide. Was nowhere to be seen when Rangers equalised, saw plenty of the ball after that but did little with it. Could struggle at right-back against the elite teams in Europe.

Alex Telles 6 - Telles saw an early free kick sail over the bar before delivering a cross that Zé Luís headed off the post. Picked up a caution for fouling Morelos and largely won the battle with James Tavernier. A bad pass that allowed Morelos to break clear brings his rating down from 7 to 6.

Danilo Pereira 6 - Didn’t have much impact on the game in attack or defence.

Mateus Uribe 6 - Heavily involved early on and but drifted out of the game and was unable to win the midfield battle alongside Danilo. Saw a late shot saved as Porto pushed forward.

Otávio 5 -The Brazilian has had an underwhelming start to the season and offered next to nothing in attack. Largely anonymous, a passenger and was justifiably hooked in the 60th minute.

Luis Díaz 7 - Struggled with his positioning in the first half but was in the right place at the right time to give Porto the lead. Collected a loose pass on the edge of the area, made space and capitalised on Rangers standing off to fire a rocket into the top corner. Didn’t do much else and made way for Nakajima in the 63rd minute.

Zé Luís 6 - Had two great chance to continue his goal scoring record at the Estádio do Dragão. His first header went wide, second hit the post and the striker failed to get any more opportunities despite working hard for the team.

Moussa Marega 6 - Had a great individual battle with Filip Helander but it was one he lost. Tried in vain to hold up the ball, but couldn’t create any meaningful combination play with his teammates as he spent too much time out wide.

Bruno Costa 6 - Replaced Otávio in the 60th minute as Sérgio Conceição tweaked Porto’s formation. The central midfielder is very much a fringe player in this squad and could find playing time hard to come by.

Shoya Nakajima 6 - Was introduced for Luis Diaz in the 63rd minute, tried hard to produce some magic with a number of crosses into the box. Went close to creating a late winner for Tiquinho but needs consistent playing time.

Tiquinho 6 - A late substitution for Zé Luís, the Brazilian forward's energy lifted his team and he went close to securing a late winner on two occasions.

Ronnie
This comment was minimized by the moderator on the site

Porto has lost only one of their nine Europa League group stage games (W6 D2) which is an impressive record. I think they will revenge this draw when the meet on the reverse game on 7th November in Ibrox. They do need all the points they can get...

Porto has lost only one of their nine Europa League group stage games (W6 D2) which is an impressive record. I think they will revenge this draw when the meet on the reverse game on 7th November in Ibrox. They do need all the points they can get with just 7 points sor far and trailing the group leaders. Both trail group leaders Young Boys by two points in Group G after they beat Feyenoord in Switzerland.

It's unfortunate how low we fell as a Team from going toe to toe with European elites to struggling with average teams ...

I blame the recruitment department

Honestly there are a lot of current players who shouldn't be on the roster ...

It's unfortunate how low we fell as a Team from going toe to toe with European elites to struggling with average teams ...

I blame the recruitment department

Honestly there are a lot of current players who shouldn't be on the roster ...

Bruno Costa and manafa are not Porto quality

Having two promising young defenders we still brought marcano back

If Farro and R.Dias are playing for benfica and winning the league why can one of the Diogos pair with pepe at the heart of defence

Read More
Scottez dries
There are no comments posted here yet