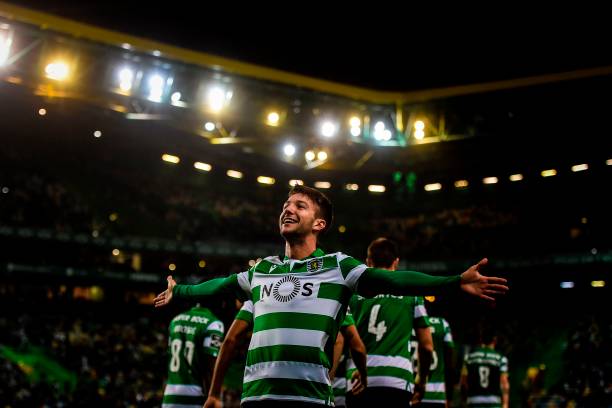 Benfica held onto top spot with a hard-fought 2-1 victory against Santa Clara away from home in a week where all of the ‘Big Three’ members claimed wins.

Goals from Vinícius and Pizzi turned the game on its head in Azores to clinch all three points for the Eagles on Saturday night, securing more time in command of the Liga NOS table.

Sporting made handy progress of their own at home to Belenenses, sinking their city neighbours with a Luciano Vietto double in a 2-0 win, prior to F.C. Porto’s 1-0 victory in the Invicta Derby against Boavista.

Elsewhere, league sensations Famalicão conceded further ground in their ventures near the top, succumbing to a Moreirense comeback to draw 3-3, meanwhile Sporting de Braga were the big victors in the Minho Derby with a 2-0 away win over Vitória de Guimarães. Here’s how the Matchday 11 unfolded.

A defeat in Lyon had Benfica looking worse for wear in the UEFA Champions League during midweek, with a trip to the island of Azores offering Bruno Lage’s men the chance to relieve some of their anguish.

Instead, the hosts were intent on piling on the misery onto the current league leaders, as Corvo, remaining true to his name, came flying in to head home the opener at the back post, 18 minutes in.

The highs continued to belong to Santa Clara either side of the half-time whistle before Vinicíus' equaliser for Benfica in the second half, tapping in a low-driven cross from Pizzi.

From provider to goalscorer once more, Pizzi made it eight league goals for the season in the 78th minute, taking in Haris Seferovic’s pass into the half-space before opening up the body and squeezing his finish past the keeper.

The midfielder’s goal was enough to sway the result in Benfica’s favour, keeping them top upon the pending international break.

The tricky games are coming thick and fast for the ever-impressive Famalicão, who looked like making light work of Moreirense on Saturday night after going 1-0 up in the 18th minute through Fábio Martins.

A wonderfully-guided effort from Uros Racic from range made it 2-0 to the ‘Fama Boys’ in the 32nd minute, as the hosts continued to pepper Moreirense’s goal en route to half-time.

Having already threatened on more than one occasion, Toni Martinez got in on the act in the 63rd minute to make it 3-0, but the Spaniard’s goal was soon cancelled out by Luís Machado for 3-1.

The winger’s lifeline spelt danger for João Pedro Sousa’s side once Pedro Nuno’s 78th minute header saw the visitors claw their way back into the game at 3-2.

Moreirense’s pressure proved to be too much for the hosts to cap, earning a penalty and equalising from the spot in the 88th minute via Steven Vitória, as Famalicão concluded the night reduced to 10 men following Nehuen Perez’s straight red card.

It was job done in Norway against Rosenborg on Thursday night, with hope at the Alvalade centred around Jorge Silas’ side doing it all again against his former club Belenenses.

Inspiration proved difficult to emit in a goalless first half in Lisbon, however, but Vietto was on hand to change all that in the second half courtesy of a volleyed finish in the 74th minute.

The ex-Atlético Madrid and Valencia man popped up to double his dosage seven minutes later, taking advantage André Moreira’s inefficient punch away to volley home once more for Sporting.

Two goals were enough for the Lions to feast on an uninspired night, adding a rare clean sheet on their climb back up the league table.

Having finally gotten points on the board in Europe and being showered in plaudits for their football against Premier League giant Arsenal, Vitória were out to impress once more at home to bitter rivals Braga.

Ricardo Sá Pinto’s team were the ones adamant to be making the headlines, however, going ever so close to breaking the deadlock via Ricardo Horta who instead of finishing from close range in the 9th minute, cut a shot back into Douglas arms.

Braga’s goal came in the 23rd minute courtesy of Paulinho’s first-time finish, having also gone close to scoring before in the encounter.

As the hosts were left without answers, Braga continued to boss proceedings in the second half, securing all three points in the 72nd minute when Galeno emerged onto ball before thrashing a shot from range just under the hapless goalkeeper, subsequently cutting the gap between the two sides to just one point.

The Dragons, fresh from midweek disappointment in the Europa League versus Glasgow Rangers, were out to come back within close proximity of Benfica following their win away to Santa Clara, as they set into the Invicta Derby with a backstory of in-house suspensions given to Mateus Uribe, Luís Diaz, Agustín Marchesín and the lesser-utilised Renzo Saravia.

Reliance fell on Alex Telles’ shoulders, with the full-back not disappointing when providing a shot from range that was too hot for Rafael Bracali to handle in the 9th minute, giving Porto the lead.

At the other end, Ricardo Costa came close to equalising versus his former side at the back-post, as the veteran’s effort via his outstretched leg flew high and wide.

Set-pieces seemed to be Porto’s likeliest avenue to goal in the second half, going close first through Mamadou Loum’s header wide moments before an improvised volley from Moussa Marega in the six-yard-box forced Bracali into action in the 73rd minute.

Zé Luís promised even more in the dying embers of the game, striking the post in the 89th minute, as Porto settled for their slim advantage to take out Boavista away from home.