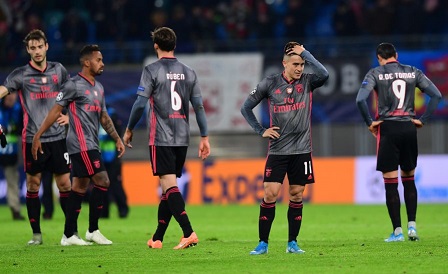 Mourinho’s Spurs come back in style

Benfica looked to have rekindled hopes of progressing to the knockout phase of the Champions League when they led Leipzig 2-0 close to the 90-minute mark in Germany. But two late goals for the hosts saw a highly entertaining match end all square and consign Benfica to fighting for a Europa League place in their final Group G match on 10 December.

Elsewhere, José Mourinho made a spectacular return to Europe’s foremost club competition as his Tottenham Hotspur side came from 2-0 down to beat Pedro Martins’ Olympiakos 4-2, with Portugal centre-back Rúben Semedo on the scoresheet for the Greek side. PortuGOAL rounds up all the Champions League action from the Portuguese point of view.

Benfica denied at the death

Benfica put in by far their best performance in this year’s Champions League in Germany tonight.

With Pizzi restored to the starting line-up, having been controversially dropped from the initial XI in recent games in this competition, the Eagles recovered from a wobbly start to take the lead in the 20th minute. A lovely flowing move involving Grimaldo, Vinicius and Taarabt ended with the Moroccan’s low cross being deflected into the path of Pizzi who dispatched a low left-foot shot into the net from 15 yards.

Leipzig hit back strongly, forcing Vlachodimos into a spectacular fingertip save and in the same move the home side were unfortunate as Grimaldo got away with a clear push in the back of the man he was marking in the box that the VAR disregarded.

Pizzi then produced a wonderful moment of skill, turning his marker inside out and curling an angled shot onto the crossbar. The visitors doubled their lead just before the hour mark as Vinícius took advantage of a slip by Klostermann to race clean through on goal and coolly slot into the corner of the net.

Both sides looked dangerous when attacking, and it was so nearly game, set and match to Benfica late on when substitute Raúl de Tomás produced an outrageous effort at goal from his own half, that necessitated a spectacular diving stop by Leipzig’s substitute goalkeeper Yvon Mvogo to prevent what would surely have been the Champions League goal of the season.

By this time Leipzig were pouring incessantly forward, with another substitute, Czech striker Patrik Schick, making a nuisance of himself in particular, and it was a neat turn by Schick that drew a foul in the box by Rúben Dias, with Emil Forseberg converting the resulting penalty.

Both goalkeepers had required long periods of treatment in the second half, so it was little surprise when the referee decided 9 minutes of additional time would be played. And truth be told there was a disappointing inevitability about the Leipzig equaliser as the sheer volume of offensive football towards the Benfica net was translated into a 96th-minute headed goal by Forsberg.

“It’s an unjust result,” said Pizzi. “We knew we’d be up against a tough team. We attacked well and went 2-0 up but unfortunately we couldn’t hold on at the end. It’s a huge disappointment. Overall we deserved to win.”

Benfica have to beat Zenit in their final match in Lisbon by 2-0 or three clear goals to qualify for the Europa League.

Mourinho back with a bang - Roundup

In North London we saw a clash between two Portuguese managers. Pedro Martins’ Olympiacos arrived in England with just one point in this incredibly tough group. His managerial opponent came in the form of the enigmatic José Mourinho who returned to the Champions League, a competition he has won twice before.

Both Daniel Podence and Rúben Semedo started for the Greek side and it was a dream start for Martins’ side, taking the lead after 6 minutes through El Arabi, a lead that was doubled 13 minutes later as Rúben Semedo grabbed a goal. Going into half time two goals to the good would have been perfect, however it was not to be. Dele Alli pulled one back for Mourinho’s men and they began the second half as they ended the first. A 50th-minute goal from Harry Kane levelled the score and 20 minutes later Aurier got the third, before Kane headed in his second to kill the game off.

Olympiakos sit rock bottom but can make the Europa League if they beat Red Star Belgrade in their final group game. For José, it was a great night all around. His first win at the Tottenham Hotspur stadium, first Champions League win with his new club and he saw his side show character and desire to come back from two goals down. Great to see him back UEFA’s premier club competition.

Luís Castro’s side arrived in Manchester knowing qualification was still very much a possibility and after a 1-1 draw and a solid’s night work against Pep Guardiola’s City, that is very much still the case.

Both Bernardo Silva and João Cancelo played 90 minutes. Ilkay Gundogan put the Citizens 1-0 up on 56 minutes, it remained 1-0 until the 69th minute when Solomon equalised after being on the pitch for just four minutes. City dominated throughout, having 17 attempts with 7 on target to Shakhtar’s two shots on target. However, at the end of 90 minutes the spoils were shared, a good result on reflection for both sides. Manchester City qualify as group leaders with a game to spare and Shakhtar are in the driving seat to qualify in 2nd place. On matchday 6 Castro’s men host Atalanta knowing a win will confirm their progression to the knockout rounds.

Atleti travelled to Turin to face Juventus in a clash between the two best teams in Group D. There was speculation regarding the fitness of talisman Cristiano Ronaldo prior to kick-off but Sarri deemed him fit enough to start, and subsequently play the full 90 minutes.

Paulo Dybala scored just before half time in a game that was not the greatest watch. The sides produced just two shots on target each and it felt in large parts like the game was going to kick into life but ultimately failed to do so at any point. João Félix made his Champions League return coming off the bench on 53 minutes after missing two games through injury. He showed some nice touches here and there but couldn’t engineer anything substantial to get his side back into it. The most important thing for Ronaldo and Juventus is that they are through to the knockouts and through as group winners.

Atleti’s position however, is a bit more precarious. Leverkusen, who play Juventus on the final day, are just one point behind the Spaniard. A win for Leverkusen and defeat for Atletico against Lokomotiv would see Leverkusen qualify and the La Liga side drop into the Europa League. All to play for, for Simeone’s men going into the final matchday.

The battle between the bottom two teams in Group D played out in Russia as Eder and his team were beaten 2-0. The Portugal striker played the first 77 minutes, while João Mário missed out through injury. The goals came courtesy of a Zhemaletdinov own goal and a Sven Bender goal. Lokomotiv cannot qualify for the knockout stages, but qualification to the Europa League is still a possibility however it would require a victory away at Atlético Madrid and even then, they’d need to rely on Leverkusen dropping points. Not looking very likely for the Russian side.

Mário Rui and his Napoli side put in a good performance at Anfield, leading for a large part of the game thanks to a Dries Mertens goal. Liverpool equalised through Dejan Lovren but couldn’t find a winner. Rui was disciplined throughout, knowing he didn’t have license to get forward as much as he’d like due to Liverpool’s expansive wide men. His task was solely to defend and stop those threats which he did well throughout.

Napoli are in great shape going into their final game. They sit top of the group on 10 points and know that a win against rock bottom Genk is all that is needed to qualify as group winners.

It was a nightmare for Borussia Dortmund and Raphaël Guerreiro in Spain. Rapha played for the majority as a left midfielder with Schulz operating as the left-back. Nélson Semedo missed out through injury.

Luís Suarez and Leo Messi kicked off proceedings after 29 minutes, the Argentinian setting up Suarez to make it 1-0. Soon afterwards the same combination worked together again but this time in reverse, Luis setting up Leo to make it 2-0. Griezmann made it 3-0 after 67 minutes to put the game to bed. Jadon Sancho pulled one back after 76 minutes but it wasn’t enough.

Guerreiro is not through to the knockouts yet. Dortmund sit 3rd in the group, level on 7 points with 2nd placed Inter. The Germans will be hoping to take all 3 points off Slavia Prague in the final match day and hope Barcelona can take points off Inter.

Antony Lopes’ Lyon fell 2-0 in Russia against Zenit in their clash in what is one of the tightest Champions League groups. Lyon can still qualify provided they beat RB Leipzig and Benfica do them a favour by taking points off Zenit. Dzyuba and Ozdoev got the goals for Zenit in what was a disappointing night for Lopes’ side.

Tiago Djalo started in the heart of the Lille defence tonight as they were soundly beaten 2-0 by last year’s semi-finalist’s Ajax. It was a nightmare start for the French side as Hakim Ziyech scored Ajax’s first after just two minutes. From that point it was an uphill battle for Lille, and Ajax put the game beyond doubt on 59 minutes with a Quincy Promes goal.

Renato Sanches came on with just over 10 minutes to go, by which time the game had fizzled out. A disappointing night overall for Lille who sit rock bottom of Group H with just one point. Bruno Varela was an unused substitute for Ajax.