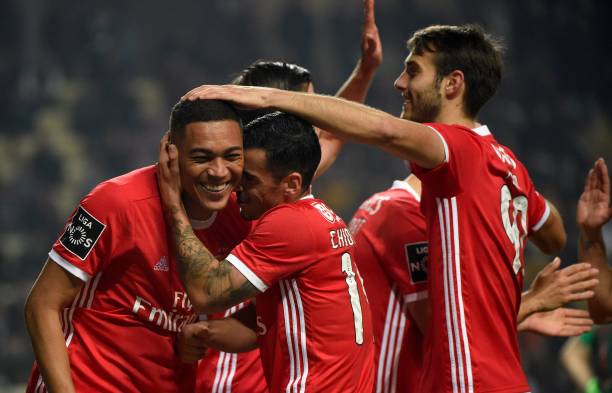 Benfica have prolonged their stay at the top of the Primeira Liga courtesy of two more goals and a further assist from the in-form Carlos Vinícius, pushing the Eagles onto a 4-1 victory away to Boavista, last Friday.

Despite heading into half-time locked at 1-1, Vinícius and co. were able to fuel a second-half turnover, as Franco Cervi and Gabriel also got in on the act on the night.

FC Porto attempted to reply on Sunday but could only come up with a 1-1 away draw against Belenenses to slip four points behind top-spot, meanwhile in the ever-evolving race for third, Sporting capitalised on Famalicão’s loss to Tondela to come within a point of the newly-promoted side, defeating Moreirense 1-0 at home. As always, PortuGOAL has the peak of this weekend’s action.

Having hosted Sporting de Braga and Porto at the Bessa in their last two home games, the Boavista faithful readied themselves for another blockbuster with Benfica coming to town.

After seeing a goal of his chalked off for offside in the early knockings of the game, Pizzi was catching the eye with a pinpoint pass over the top for Vinícius to meet, allowing the Brazilian to do the rest in the 34th minute by placing Benfica a goal up.

Boavista’s response came in the form of a Nikola Stojilikovic header from close range, pulling the Black Panthers level with little more than two minutes to go until the half-time break.

The visitors emerged the hungrier side in the second half, however, retaking the lead after Cervi popped up to scramble in Vinícius’ low cross at the back-post, amid calls for a foul from the Argentine when pulling the trigger.

A delightful first-time effort from then Vinícius amplified Benfica’s lead in the 64th minute before his compatriot, Gabriel, concluded a 4-1 victory with a late headed goal from Alex Grimaldo’s free-kick.

Another day, another test for the much-talked-about Famalicão, hosting mid-table Tondela at the Estádio Municipal de Famalicão. Honours went the visitors’ way, however, and it was Levante import Pepelu who’d get his name alongside the game’s first goal, reacting quickly to break the deadlock with a near-post header from a corner.

At the second bite of the cherry, Xavier doubled Tondela’s lead in the 20th minute before Famalicão’s Roderick Miranda could claw a goal back towards the end of the half.

Jhon Murillo was left red-faced in the 49th minute after missing from close range with the entire goal at his mercy, just moments before Fábio Martins made the winger pay with the hosts’ equaliser from the penalty spot in the 53rd minute.

Only Claudio Ramos, as well as the VAR, stood in Famalicão’s way in their quest for a turnaround, setting up Murillo’s redemption in the 97th minute, snatching all three points for his side with a late finish.

Following Famalicão’s slip-up against Tondela, a win for Sporting at home to Moreirense would take them back within a point of third place, as they bid to bounce back from last weekend’s disappointment away to Gil Vicente.

Yannick Bolasie thought he had gotten the Lisbon giants off on the right foot in the 11th minute before his goal, via the VAR, was taken away for a Cristian Borja offside call.

The likes of Bruno Fernandes, Jesé Rodrigues and Bolasie himself all failed to edge Sporting in front en route to a goalless first half of football, with Jeremy Mathieu reinstating the order in the second period with a dangerous free-kick slamming into the face of the post in 51st minute.

Jorge Silas’ side eventually found a way through, taking advantage of Luiz Phellype’s aerial prowess to power in a winner in the 70th minute, as Moreirense headed for defeat reduced to 10 men.

A big night in Jamor saw Porto go head-to-head with Belenenses, once again in search of closing down Benfica’s lead at the top of the table to two points. But Pedro Ribeiro’s team promised the Dragons a complicated night, taking the lead through a well-placed André Santos effort from the edge of the area after Ivan Marciano failed to clear his lines effectively in the 14th minute.

Ex-Porto man Licá could’ve doubled Belenenses’ lead prior to an important point-blank save from Augustín Marchesín, with fortunes turning at the other end following a foul on Jesús Corona inside the box from Esgaio.

Alex Telles stepped up to the plate from 12 yards, making no mistake and drawing Porto back level in the 32nd minute, as the two sides shared the spoils going into the break.

The second half saw Herve Koffi star between the sticks for Belenenses, keeping Sérgio Oliveira’s goal-bound free-kick out with the post's back-up in one of Porto’s agonising efforts to take the lead.

A winner would evade the Dragons’ grasp as they slipped four points behind Benfica with the subsequent 1-1 draw.

Porto got screwed by the officials for sure, but Sergio Conceicao should stop complaining because scapegoating the refs won't hide his stubborn team selections and limp tactics.

He has simply not been good enough the last season and a half. He...

Porto got screwed by the officials for sure, but Sergio Conceicao should stop complaining because scapegoating the refs won't hide his stubborn team selections and limp tactics.

He has simply not been good enough the last season and a half. He has no ideas besides the standard 4-4-2, refuses to give new players like Saraiva a shot, and refuses to take accountability for his own shortcomings.

Time for a managing change and an administrative change at my club.

Another outstanding display from Carlos Vinicius! Two superbly taken goals and a nice assist to boot. What a signing he's proving to be for us, so far! He's an old school Brasileiro forward, actually reminds me a bit of the old Ronaldo and...

Another outstanding display from Carlos Vinicius! Two superbly taken goals and a nice assist to boot. What a signing he's proving to be for us, so far! He's an old school Brasileiro forward, actually reminds me a bit of the old Ronaldo and Adriano, similar style of forward! He should have started every CL game for us this season, perhaps we would have gotten better results. I think Lage has finally found his best front 2 with Vinicius backed up by the also impressive Chiquinho. With Chiquinho there it's more like a 4-2-3-1as he also tracks back a lot and helps the CM. We have much more balance this way.

Happy also that Seferovic is back from his injury already to be the back up forward from the bench, because I'm less impressed with RDT the more I see him play. It's been a really poor start from him it has to be said, and he's been given plenty of chances already, both as a second forward and as a number 9. He just looks quite weak in the box, doesn't have a lot of presence in the box, always gets outmuscled by the defenders and doesn't get into particularly good positions either. Just 2 goals in 16 matches simply isn't good enough at a club like SLB, and perhaps he will still come good later in the season...but for the moment he's got to be content with being 3rd choice centre forward.

Anyway a great result for us against a Boavista team who have started the season quite well.

After a rocky start, it looks like we are finally starting to click. As Andre mentioned, the emergence of Vinícius and Chiquinho have played a major role in this recent improvement in form.

Vinícius in particular looks like the real deal. He...

After a rocky start, it looks like we are finally starting to click. As Andre mentioned, the emergence of Vinícius and Chiquinho have played a major role in this recent improvement in form.

Vinícius in particular looks like the real deal. He doesn't necessarily excel at one area, but he always seems to do all the little things right. His hold up play is excellent, he's clever with his runs, and he's a cold blooded finisher.

I've also liked what I've seen from Tomás Tavares. He still has a lot of work to do defensively, but he's a real threat going forward.

I'm also a big fan of Taraabt. He's had his issues with professionalism in the past, but he seems to have finally matured and his class is undeniable.