Porto beat Feyenoord 3-2 to progress in the Europa League 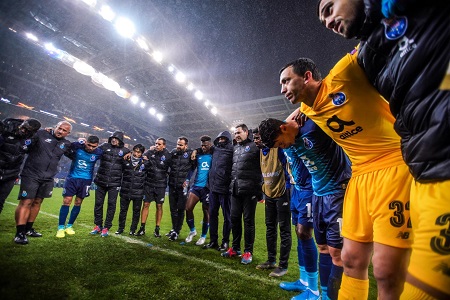 Porto’s Europa League campaign will continue after a 3-2 victory against Feyenoord at the Estádio do Dragão. Porto were 2-0 up inside 15 minutes thanks to Luis Díaz and a Tyrell Malacia own goal, the Dragons then falling asleep in allowing Eric Botteghin and Sam Larsson to restore parity.

Tiquinho bundled the ball over the line in the 33rd minute that ended up being the winning goal. Sérgio Conceição’s side were on the back foot for most of the second half, but they hung on and snatched top spot in Group G after Young Boys’ late equaliser in Glasgow. PortuGOAL's Matthew Marshall braved the rain to see Porto take all three points.

Otavio’s clumsy challenge in the 9th minute saw the Brazilian booked and concede a dangerous free kick. Steven Berghuis smashed it straight at Agustín Marchesín as Feyenoord looked dangerous on the break in the opening stages, especially behind Jesus Corona’s often vacated right back spot.

One minute later Telles picked Berghuis’ pocket and found Marega who released Tiquinho. He bamboozled Leroy Fer before whipping a dangerous ball across the face of goal that Tyrell Malacia bundled into his own net. At 2-0 up after 15 minutes it appeared the floodgates were about to open.

It was a simple corner that found Eric Botteghin unmarked at the back post where he headed past a helpless Marchesín. Sam Larsson couldn’t connect on a dangerous Malacia cross but he only had to wait one minute for a near identical chance, this time he made no mistake by guiding ball into the bottom corner.

Pepe connected with an Alex Telles free kick that forced a save from Marsman but Porto would soon retake the lead. Danilo released Marega who squared to Otavio, his shot was spilled but Tiquinho slid in and bundled the ball over the line via the post.

It was ugly but effective as Porto capitalised on another error from Marsman who was struggling in the slippery conditions. Marcano headed a Telles corner over the bar to end a pulsating first half.

Marega began the second half with a powerful run and an intercepted cross before a lovely team move ended in Diaz shooting wide. That was where Porto’s ability to exert pressure ended as Feyenoord got on top and controlled the game.

Orkun Kökcü and Steven Berghuis shot wide as the rain bucketed down that made free flowing football problematic. The Dutch club had a great chance to equalise as Luis Sinisterra’s cross creating confusion for Jesus Corona, the ball hitting the post and rebounding into the grateful arms of Marchesín.

Dick Advocaat introduced Yassin Ayoub and Luciano Narsingh for Jens Toornstra and Luis Sinisterra with both players involved in Feyenoord’s next chance. Ayoub’s cross fell to Narsingh who produced a fine save from Marchesín when a goal looked likely.

Porto close it out

Sérgio Conceição had seen enough and decided to completely shut up shop. Sérgio Oliveira and Zé Luís were introduced with Marchesín and Corona booked for time wasting. Marega made way for Chancel Mbemba, Otavio making an important interception to ensure Porto picked up all three points.

Back from the brink

Two 2-0 away defeats either side of a 1-1 home draw against Rangers saw Conceição’s side on the back foot in Group G. It looked like an early exit was on the cards with Porto trailing 1-0 at Young Boys, but Vincent Aboubakar’s brace secured a vital victory that provided the platform to go on with the job.

Can Porto win the Europa League?

Agustín Marchesín and Alex Telles reiterated Porto’s desire to go on and win the Europa League after the victory. Anything is possible, but on current evidence it seems unlikely that Porto can compete with the elite teams at the business end of the competition.

Sérgio Conceição is aware there is a long way to go with his team, saying: “We finished the group in 1st place, but not with the brilliance we wanted.”

Jesus Corona is a liability at full-back, and there are issues with cohesion considering the frequent formation, tactical and personnel changes. Porto alternated between a 4-3-3 and 4-2-3-1 against Feyenoord with Otavio given freedom to manoeuvre, but his best position is still up for debate and one of the conundrums Conceição must solve.