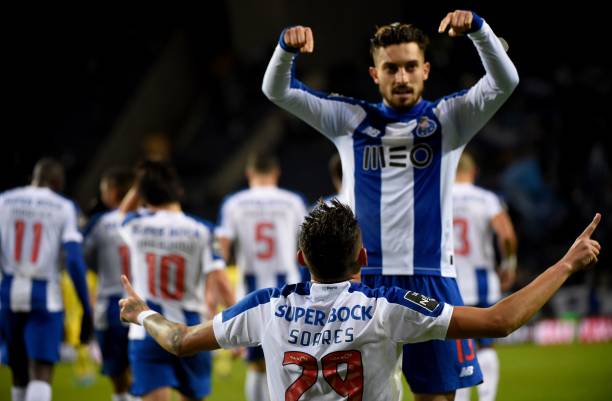 FC Porto have returned to winning ways after defeating Tondela 3-0 at the Estádio do Dragão, maintaining the current four-point gap behind league leaders Benfica.

Goals from Tiquinho Soares and Mateus Uribe kept the Blue and Whites in the hunt for top spot, having seen the Eagles kick the weekend off with a big victory over third-placed Famalicão at home to hit the 39-point-mark with a 4-0 win.

Defeat for Famalicão opened up an avenue for Sporting to re-enter the top three, doing so with another handsome 4-0 score-line, dealt to struggling Santa Clara. Here’s how the action at the top unfolded.

Just days after securing their passage into the Europa League with a 3-0 victory at home to Zenit St. Petersburg, Bruno Lage was keen to add another positive result to crown a week that also included the feat of a new deal coming the manager's way.

Famalicão’s start was strong but it was eventually overshadowed by Benfica’s response towards the end of the first half, complemented with Carlos Vinícius’ close-range finish to break the deadlock for the hosts in the 39th minute.

The Estádio da Luz was quick to celebrate a second shortly after the interval, as the in-form Pizzi treated the home crowd to a well-executed volley inside the box in the 48th minute.

Pizzi was causing all the problems once more in the 63rd minute, juggling the ball before finding the back of the net with yet another left-footed volley. Caio Lucas grabbed the fourth and final goal in a 4-0 victory for Benfica, cutting in from the left before driving a low shot past the goalkeeper.

A win for the Lions would see them leapfrog Famalicão after their undoing back in Lisbon, but it would require Silas’ men to overcome the wounds left open from Thursday’s much-maligned defeat to Linz in the Europa League.

Yannick Bolasie could’ve given Sporting the lead with a miscalculated effort with his head but Luiz Phellype would have no problem using his when placing the visitors ahead from Luciano Vietto’s cross, landing the game’s first goal in the 40th minute.

The Brazilian striker was on hand to bag a second with a side-footed finish from Stefan Ristovski’s low cross in the 47th minute, prior to Bolasie amplifying the score with his head less than ten minutes later.

Bruno Fernandes completed the rout from the spot in the 60th minute, taking Sporting two points above Famalicão to now occupy third place.

The Dragons were looking to kick-start their bid for the league title against Tondela after last week’s draw away to Belenenses, with a win for Benfica leaving Sergio Conceição’s men with little margin for error.

Jesús Corona’s cross had Tiquinho Soares angling a header into the far-post in the 10th minute, giving Porto the start they were craving for in front of their home crowd.

Soares was Porto’s main man once more in the 32nd minute, following in Moussa Marega’s glancing header from a set-piece to finish at the back-post and double the Dragons’ lead.

Quick ball circulation, polished by a deft touch inside the box from Otávio, set Porto on their way to a 3-0 victory in the 51st minute, finished off by Mateus Uribe. The likes of Shoya Nakajima could’ve put more past a helpless Tondela but three goals would be enough to fuel a return to the three-points trail.