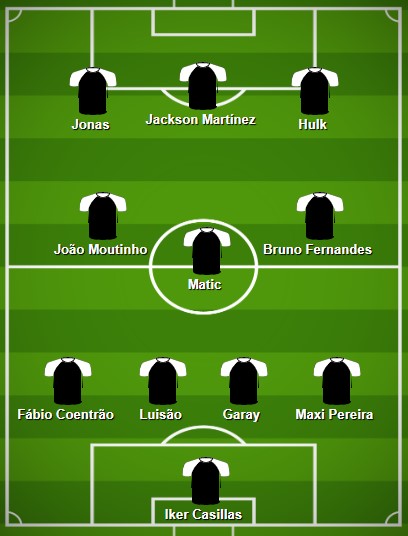 Having selected the “team of the decade” for each of the Big Three, PortuGOAL now picks the best XI from the 2010s chosen from all Primeira Liga sides.

Porto and Benfica have dominated Portuguese football these past ten years. The Eagles have won the league five times in that period, compared to four times for the Dragons. And with the two fierce rivals again set to fight it out between themselves for the last championship of the decade, it is no surprise that Porto and Benfica players dominate the overall team of the decade.

The players were selected based on three criteria: the footballing quality they showed in Portugal, consistency over time, and silverware won. Or to put it another way, the players who had most influence on this past decade of football in Portugal.

Have we got it right or are we wide of the mark? Feel free to comment to help us arrive at that elusive ideal in Portuguese football – a consensus. Meanwhile, if you think you are better at picking numbers, don’t miss out on promo code casino777.

José Mourinho was highly critical of Porto’s decision to sign Iker Casillas, on huge wages by Portuguese standards, in the summer of 2015. The bad blood between the two may have partly explained Mourinho’s decision to express his opinion on the matter, but a less-than-convincing debut season, including costly mistakes in the Champions League and the Liga NOS, suggested the ‘Special One’ may be right. Porto stuck by the Spanish World Cup winner and their faith and investment was fully vindicated as Casillas went on to turn in consistently excellent displays. Several majestic performances in Portuguese clássicos – so important when it comes to defining champions in the Primeira Liga – live in the memory, as Casillas kept up the highest of standards until an untimely heart attack brought a premature end to his career.

He’s the kind of player opposition fans hate on, but who you adore if he plays for your team. There have been right-backs with more finesse in Portugal this decade – Nélson Semedo and Álvaro Pereira come to mind – but none who have contributed so consistently with little or no oscillation in performance level. Fiercely competitive, almost never injured, Maxi has picked up three Liga NOS titles in the decade (two for Benfica, one for Porto) and 9 domestic cups, in 345 matches for Portugal’s two biggest clubs.

A Benfica institution, Luisão enjoyed an extraordinary career in the Portuguese capital spanning 15 years. The beanpole centre-back’s individual path somewhat matched Benfica’s evolution as the Lisbon club gradually dragged itself out of the darkest era in the club’s history to return to the top of the game in Portugal. Like the fortunes of Benfica itself, Luisão seemed to get better and better every year, winning 14 of his 20 major titles in this decade, marshalling the defence with determination, controlled aggression and intelligence.

The elegant central defender was the other half of a formidable partnership alongside Luisão. The two of them were practically unbeatable in the air, and Garay used his height to good effect at the other end of the pitch, scoring 12 goals during his three seasons at the club, which culminated in a magnificent 2013/14 season when Benfica won the Primeira Liga, Portuguese Cup, League Cup and unluckily missed out on the Europa League, losing the final to Sevilla having outplayed the Spanish side.

Former Seleção left-back Fábio Coentrão played in Portugal for three years at different clubs during the decade – Benfica, Sporting and Rio Ave – showing the full range of his tenacious defensive ability and skilful contributions to attack. A wonderful all-round full-back, his career was hampered by injuries and a weird kind of attraction for negative publicity, none of which should detract from the final appraisal that he was absolute top quality.

Jorge Jesus is famed for moulding players to execute different functions to what they previously displayed, and Matic is surely among his most resounding of successes in that department. Purchased from Chelsea as an attacking midfielder, JJ spent months working tirelessly with Matic before unleashing him into the Liga NOS having rebooted the Serbian as an exceptional holding midfielder. A perfect amalgamation of uncommon strength, intelligence and technical ability enabled Matic to dominate games from the base of Benfica’s midfield, simultaneously nullifying opposition attacks with ruthless efficiency while setting his own team’s forward momentum in motion through accurate passing and smart decision making.

The personification of a model professional. Unassuming, neat and efficient in everything he does, Moutinho’s lack of dazzle cannot be mistaken for a lack of effectiveness. Constantly busy, be it knitting play together in midfield, bit it be quietly disrupting the opposition’s flow, Moutinho is a classic case of a player who makes others around him – and as a corollary the team as a whole – function a whole lot better. It should come as no surprise that all of the teams he has played for – Sporting, Porto, Monaco and Wolves – have enjoyed their most successful spells in recent years with Moutinho at the heart of midfield.

It’s been a tough decade for Sporting fans, but in recent years at least they have had the chance to enjoy an authentic phenomenon, a quite brilliant player in a terrible team. In 130 matches for Sporting, Bruno Fernandes is averaging exactly one goal every two matches (it should be noted he has only been the designated penalty taker for a minority of that time, when Bas Dost got injured and subsequently left the club). That is a strike rate any centre-forward would be proud of, but Bruno Fernandes is a midfielder who also happens to be a masterful assist provider, a tireless worker, and a spring of constant invention, despite having had next to no quality team-mates in his three seasons at the Lisbon club. A place at a club more befitting of his special talent surely awaits.

Brute strength, pace to burn and a generous splash of finesse made the Brazilian attacker an explosive player who was practically impossible to keep quiet. Whether coming off the right flank and cutting inside to shoot or cross, or charging through the middle, Hulk was a bundle of energy with his sights firmly fixed on the opposition net. Plucked from Japanese football, Hulk was a huge hit at Porto winning three successive league titles, the Europa League and a Portuguese Cup at the Estádio do Dragão.

Calm and unassuming off the pitch, Jackson was a goal machine on it – especially during three incredibly prolific seasons at FC Porto. The Colombian netted 94 times in 143 matches for the Dragons. Lethal with either foot or in the air, his astonishing record was compiled despite the fact Porto were clearly in a disinvestment phase, with Jackson not benefitting from talent-packed earlier iterations of Porto. Jackson won many more friends and admirers when he returned to Portugal to play for modest club Portimonense in 2018, despite his goal-scoring powers being severely curtailed by a long list of serious injuries, and sure enough he has found the net regularly for the Algarve outfit. But this is no sentimental choice. Jackson at his pomp was world-class.

The greatest free transfer in football history? Discarded by Valencia, nobody could have guessed the impact the silky-skilled Brazilian striker would have on Portuguese football in general and Benfica in particular. His detractors point to the fact he rarely made the difference in the big matches, but does that matter when you have a player who single-handedly is a virtual guarantee of three points as he destroys team after team? During five incredibly productive years wearing Benfica’s colours, Jonas scored 31, 36, 18, 37 and 15 goals from 2014 through 2018, the Brazilian winning four league titles and twice being voted player of the season. To sum up, the MVP of the decade in Portugal.