Benfica team of the decade 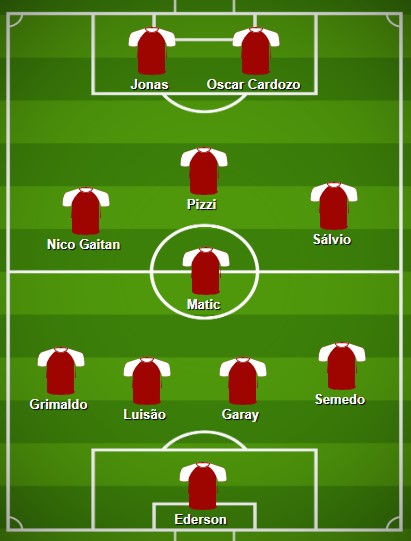 In part two of PortuGOAL’s “team of the decade” series, Marco Lopes (@FootyML) turns the spotlight on Benfica.

Having won the Portuguese Primeira Liga in 5 of the 9 championships contested so far this decade, there are no shortage of candidates for each position.

Each player’s selection is justified, followed by honourable mentions listing those who narrowly missed out.

Interestingly, although Benfica have dominated the second half of the decade, Marco’s picks include several names from the first half of the 2010s.

Has he got it right?

Hot off the heels of impressive performances to win the 2016 Taça da Liga, Ederson was thrown into a cauldron of pressure away at the Alvalade in a huge title contention matchup, due to an injury to first choice keeper Júlio Cesar. The youngster kept a clean sheet in that Liga debut, and kept goal for Benfica in the subsequent 9 matches of their season-ending 12 wins, which were necessary to complete the campaign two points ahead of Sporting in the tightest title race since 2012/13. Ederson ended the season with a 60% clean sheets to match the record, a percentage he sustained in the following season where Benfica were hugely dominant in another league title win. The Brazilian’s great footwork, quick distribution and shot-stopping were strong features of his 58 appearances in Benfica colours.

Honourable mention: Julio Cesar, who was a key part of three of Benfica’s league titles to make up their historic Tetra by the end of 2017/18.

A creative attacking fullback with strong defensive instincts, Semedo was a key part of two of Benfica’s league titles in the decade. His breakthrough season in 2015/16 was impressive, particularly in needing to cover for previous first choice André Almeida, but the right-back shone most in offensive play in 2016/17, sharing the lead for assists with Pizzi (12) in all competitions. Only Pizzi (52) played more matches than Semedo (47) that season.

Honourable mention: Andre Almeida, whose reliability and leadership continue to shine for the club. One of the only players to have played under all three of Jorge Jesus, Rui Vitória and Bruno Lage.

First the easy choice. Luisão isn’t just Benfica’s best centre-back of the decade, he’s in the conversation for the best defender to play at the club. He has the most appearances (538) of any foreign player, won 20 major titles in his time with the club (14 of which came in this decade), and scored 47 goals to help the winning effort. O Capitão wore the club on his sleeve, was an imposing and composed defender, and known for being fierce in the tackle. Add his intelligence, experience and leadership, and it’s understandable to realise that his is the bar many will struggle to beat for years to come.

As for Garay, the cool-tempered Argentine combined with Luisão to make Benfica an imposing defence and brought reliability and stability to a backline that had been known to operate quite recklessly in years past. His 136 appearances for Benfica included 12 goals most of which were headers, emphasizing his danger from set pieces. Those goals were significant too; 4 were game winning goals, and 6 came in the historic treble winning season of 2013/14.

Honourable mention: Jardel, who continues to serve the club and provide experience and leadership to the emerging stars and the club, and has filled as both first choice centre-back and squad player to suit whatever the club has needed.

Grimaldo has played a growing role every season, featuring in three of Benfica’s title wins in the decade, including the most recent in 2018/19. The Spaniard has proven to be a strong creative force, having created a total of 28 goals over his 141 appearances at the time of writing, with 13 assists in the 2018/19 season (only Pizzi has had more).

Honourable mention: Eliseu, who gave Benfica a couple of league titles, much grit and heart, a memorable left foot with some tremendous long-range goals, and a title winning celebration weaved into the very fabric of the club’s modern popular culture.

The Argentine enjoyed an extended run at the Luz, and played a prominent role across all of Benfica’s titles in the decade, particularly with his aggressive, direct attacking style of play, often known for incredulously believing he could simply run past everyone with the ball at his feet. In respect of goals scored, his 62 goals are only surpassed by other strikers and Pizzi (65), showing just how valuable his goal output was. Sálvio had a tendency to score game winners, netting 17 across his 266 appearances for Benfica.

Matic played two and a half seasons at Benfica, but his impact remains a standard to which subsequent defensive midfielders are still being compared. The Serbian came into the team primarily as a central midfielder and slotted in superbly into the anchor role, carving out excellent partnerships with Axel Witsel and Enzo Perez, and fast became one of the most important keys to Benfica’s nearly incredible 2012/13 season. Matic didn’t just show off size and strength in his defensive responsibilities; he was composed in his passing and tactical reading of the game. His goal against Porto is still revered for its technique and beauty.

Honourable mention: Enzo Perez, who was unusually converted to a central midfielder by Jorge Jesus, and became crucial to the team’s back to back titles in 2013/14 and 2014/15, lauded for his footballing brain by fans and peers alike.

Pizzi’s output for Benfica has been remarkable, particularly under Bruno Lage, where the versatile midfielder has shown extensive goalscoring instincts to add to his broader creativity. Used in various roles across the attacking midfield positions, the Portuguese slotted in well into midfield to replace the void of Enzo Perez in Benfica’s Tetra campaign of 2016/17, and led the Liga in assists in 2018/19 as a support to Lage’s maiden title victory. With over 60 goals and 70 assists already in his 250+ games, it’s hard to ignore such output given his contributions to four of the league titles and 3 of the domestic cup victories in the decade.

Honourable mention: Pablo Aimar – for many, affectionately the most gifted and talented player that has worn a Benfica shirt in recent years. His career was cruelly unable to overlap with the period of trophy output in Benfica’s last ten years. The Argentine’s footwork and excellent passing has seen few equals, and his combination with Cardozo, Di Maria and Saviola was as potent as it was entertaining to watch.

Another foreigner blessed with fantastic footwork and dribbling ability, Gaitan’s rise to prominence was especially evident in his final two seasons with Benfica where his assist totals skyrocketed. In 253 appearances, the Argentine scored 41 goals and created another 88 in a six season stretch where he experienced the heartbreak of 2012/13 and the glory of the treble a season later. Gaitan had the pressure of replacing another revered Argentine talent in Angel di Maria, and not only did so successfully, but set a standard that remains unmatched since his own departure in 2016.

The true MVP of Benfica’s decade at many points, including Benfica’s disappointing title challenge in 2017/18, Jonas’ time at the Luz became career defining for both himself and his club. It wasn’t just the silky footwork, but more so the quality of finishing, the versatility in attacking approaches, the consistency from the spot and above all, the supreme intelligence with which he conducted himself in Benfica red. Jonas managed to chalk up 137 goals, creating an additional 42 in his 183 games for the club. Add a couple of scoring titles, player of the year awards and of course, trophies for the team – and it’s not hard to see why the Brazilian will be revered for all eternity with considerable affection by all Benfica fans.

Oscar “Tacuara” Cardozo was another foreigner enjoying reciprocal love with the club, and similar to many of the earlier squad under the Jorge Jesus era, found himself unlucky not to have his career crossed alongside more of the trophies the club earned in the decade. But the Paraguayan took more than enough opportunities to show off his scoring touch, especially with his lethal left foot. Cardozo extended his scoring run well into the earlier part of the decade. He left the club in 2014 having officially set a new record for the most goals by a foreign player, with 172 goals in 293 appearances for Benfica.

Honourable mention: Lima – scored 70 goals in his three seasons for Benfica, 26 of them game winners, the Brazilian proved part of an effective combination especially in 2013/14’s treble winning season alongside Rodrigo.

Our thanks to Marco. You can find his opinions on all things Benfica, Liverpool and much more on Twitter @FootyML.