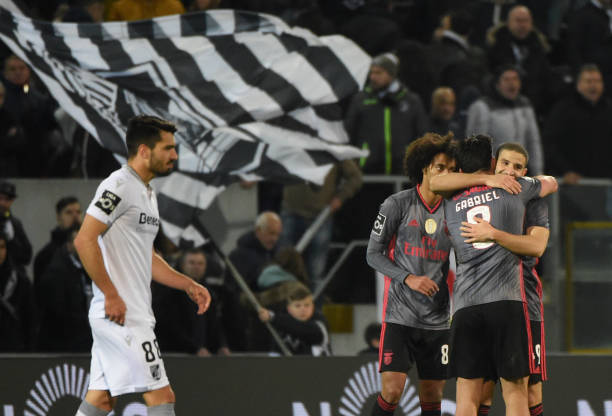 Benfica have moved seven points clear, ahead of second-placed FC Porto, prior to Sunday’s ‘Clássico’ against Sporting after defeating Vitória de Guimarães 1-0 away from home, this Saturday.

A first-half strike from Franco Cervi ultimately made the difference at the Estádio Dom Afonso Henriques, despite growing pressure from the hosts throughout the encounter to pluck a result.

Rochinha’s late red card left Ivo Vieira’s side resigned to defeat, concluding Benfica’s 14th league victory of the season from 15 matches and passing the spotlight back onto Porto before their trip to the Alvalade.

Also tonight, there was a huge win for new Sporting de Braga boss Rúben Amorim on his debut as manager, causing waves at the Jamor with a 7-1 away victory against former club Belenenses. Here’s the best of the Primeira Liga action ahead of the eagerly-anticipated ‘Clássico’.

In a clash between two of the Primeira Liga’s most lauded sides, Vitória versus Benfica served itself up as the perfect warm-up ahead of Sunday’s ‘Clássico’ for the neutral, with both teams refusing to disappoint in a busy opening quarter of an hour.

League-leaders Benfica drew first blood in the 21st minute, breaking the deadlock through Cervi’s low-strike inside the box, having been set up by Pizzi’s cut-back from the right-hand side.

Ivo Vieira’s side were quick to reply via Lucas Evangelista’s strike midway through the first half, saved by Odisseas Vlachodimos, who also stood strong to deny Marcus Edwards down the byline sometime later and keep Benfica from conceding before the break.

Vitória emerged with the larger share of possession in the second half and almost saw it count in the 68th minute after Vlachodimos spilled an incoming cross, making amends soon after by tipping over Evangelista’s goal-bound effort inside the box.

Davidson tried his luck from range in Vitória’s desperate attempt for an equaliser, leaving Benfica uneasy once more with a shot drifting just wide in the 80th minute after cutting in characteristically from the left wing.

At the other end, Pizzi neared a second after Tomás Tavares brought a long ball aimed towards the flanks down to leave the Benfica playmaker isolated with only the goalkeeper to beat, prior to Douglas’ brave intervention to deny the Eagles captain in the 86th minute.

The game closed out with a second yellow brandished to second-half substitute Rochinha, going in with his studs showing on Andreas Samaris to leave Vitória powerless in their quest the level the game.

Ruben Amorim was handed a date against the club where it all began as a footballing professional, taking on Belenenses as the successor of Ricardo Sá Pinto in the Braga hotseat.

The ex-Benfica player saw his side take an early lead through Ricardo Horta in the 8th minute, working a give-and-go with centre-forward Paulinho before slotting home on his right foot.

High pressure from Braga enabled them to grab a second via Francisco Trincão in the 19th minute, just minutes before Horta’s second, bent into the top corner from a one-on-one position to leave Amorim’s team in dreamland.

Silvestre Varela clawed a goal back for Belenenses with a powerful effort past the half-hour mark, but the three-goal lead would later be restored on the brink of half-time via João Palhinha, making it 4-1 with a low drive from the edge of the box.

In menacing form, Braga found a fifth goal as early as the third minute of the second half, with Paulinho adding the finishing touches to a swooping counter-attack.

With the game in the visitors’ complete control, there was still time to add to Pedro Ribeiro’s side’s woes, as a Rui Fonte brace late on placed Braga 7-1 up before the full-time whistle.

Huge win for SLB last night on one of the toughest grounds in Portugal to travel to against an impressive Vitoria team. We had to grind out the win in that second half, but I think we were deserved winners in the end considering we created the...

Huge win for SLB last night on one of the toughest grounds in Portugal to travel to against an impressive Vitoria team. We had to grind out the win in that second half, but I think we were deserved winners in the end considering we created the biggest scoring chances. These are exactly the kinds of games teams have to win in order to become champions and the team did well.

I was impressed with Vitoria though. I think in Ivo Vieira they have yet another upcoming Portuguese coach with a lot of potential. This was the second good game they've given us this season already, and I think they must definitely aim for at least 4th place this season. .who knows, they could even end up challenging Sporting for third place, on last night's evidence. They have some talented players, I was particularly impressed with Tapsoba (super solid CB), Lucas Evangelista and Edwards. I think Vitoria will do well to hold onto Ivo Vieira beyond this season as he has really been impressing.

As for Benfica, our standout players were Ferro, Tomas Tavares and Gabriel. Ferro had a poor match against Porto earlier in the season, but he has excelled in virtually every other game and is a very reliable CB. I am increasingly impressed with Tomas Tavares. He does make some occasional errors which is understandable given his age and lack of experience, but he is an all action fullback, always involved in the play and is a super athlete with huge potential. The Portugal Selecao are stacked with talent at right back for the next decade ahead! While Gabriel was as dynamic as ever last night and is a real all-rounder in the middle. Him and Weigl together promise to form an excellent CM duo once the German has been integrated into the starting lineup. Anyway a massive 3 points for us. Huge pressure on Porto now to win away to Sporting today to keep pace, let's see what happens in the Clasico!