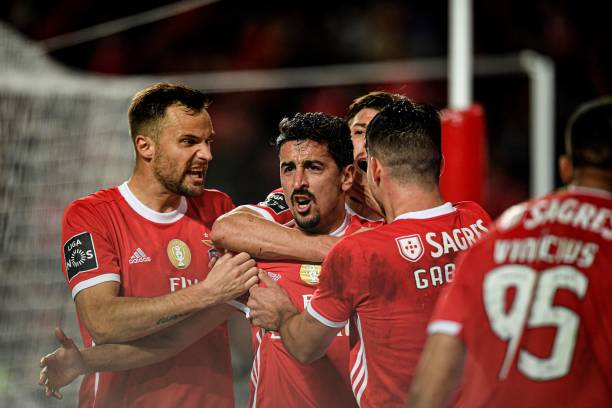 Benfica have kept up their winning start to the new decade with a late turnaround at home to Desportivo das Aves, this Friday, keeping them four points clear with a 2-1 victory.

The visitors found themselves in front before a Pizzi penalty and late strike from André Almeida saved the day for Bruno Lage’s men, ahead of FC Porto’s trip to Moreira de Cônegos. Sergio Conceição’s side had their work cut out versus Moreirense, producing a free-scoring 4-2 win in response to Benfica’s late heroics.

Elsewhere, a 1-0 win for Famalicão away to Boavista saw them hold onto third place for a further week, meanwhile Sporting defeated a virus-stricken Vitória de Setúbal side 3-1 to complete a full-house of victories for the current Primeira Liga top four. Here are all the happenings at the summit of the table.

Early league action at the Estádio da Luz saw Aves make their way to the Lisbon capital on Friday night for a first-versus-last clash, with Benfica sharpening their teeth at the sight of another potential victory.

Nuno Manta Santos’ underdogs were the ones to draw blood first, however, with Iranian winger Mehrdad Mohammadi beating Ferro down the right flank before rifling in the opener for Aves from a tight angle.

Quentin Beunardeau was tested to the fullest at the other end, keeping both Haris Seferovic and Pizzi out on multiple occasions to drag an under-pressure Aves side into half-time with a 1-0 lead.

The Eagles kept plugging away in search of an equaliser, but it wasn’t until the 76th minute, via a controversially-awarded spot-kick, that they were able to draw level through Pizzi.

With the game fast approaching the 90th minute, André Almeida found a way through for the shot-laden Benfica, striking low from Vinícius’ hold-up play to beat the goalkeeper and steal all three points.

After picking up their first Alvalade win in 11 years, Porto had their eyes on another green and white target, Moreirense, in hope of keeping up with the victorious Benfica. The hosts caused issues early with Fábio Abreu squeezing in an opener three minutes in, but Porto bit back through Tiquinho Soares’ header in the 32nd minute.

Soon after, from the penalty spot, Porto found themselves ahead in the clash after Alex Telles’ conversion in the 39th minute, but this time it was Moreirense’s turn to cancel out a lead and go into the break locked at 2-2, courtesy of João Aurélio’s slice of luck when crossing.

Causing havoc on the left, Luís Díaz saw his general good play rewarded with a goal in the second-half, with the Colombian also present in the creation of Porto’s final blow in the 85th minute, signed off by Jesús Corona’s wonder-volley from the right to make it 4-2.

With the Sporting hub adamant they can outdo the thus far impressive Famalicão in the race for a podium finish, the oft-feared trip to the Bessa signalled the first opportunity for João Pedro Sousa’s team to begin formulating a response.

Their start couldn’t be more problematic, however, going a man down following Rafael Defendi’s dismissal for a last-man challenge in the very first minute of the game.

The goalkeeper’s replacement, Vaná, was on hand to prevent Famalicão’s night from worsening after anticipating Heriberto Tavares’ chip when bearing in on goal in the 27th minute.

With a handful of half-chances at either end going begging before the interval, a struggle to even hit the target in the second period saw both sides prolong a goalless draw.

But the stalemate would barely go beyond the 80th minute, where Toni Martínez emerged to bag three precious points for his side with a strike aimed at the near post, as a red card for Marlon soon after left Boavista facing defeat when left at 10 versus 10.

Despite Vitória’s best efforts to have Sporting’s visit postponed due to a heavy flu outbreak within their camp, the hosts were forced to take the Lions on with over 20 first-team players affected by the contagious virus.

A quiet start to the game saw Jorge Silas’ side held off in the early exchanges before Stefan Ristovski’s low cross, deflected in by Vitória’s João Meira, unlocked the score in the 27th minute.

Rumoured to be Premier League-bound once more, Bruno Fernandes added to his handsome goals tally in the 34th minute after being brought down inside the box, sticking away his penalty and taking a 2-0 lead into the break.

Carlinhos was on hand to give Vitória a lifeline in the 63rd minute, making full use of Jeremy Mathieu’s loss of possession to fire a fierce shot from range, crashing in off the underside of the bar.

The crossbar wouldn’t lend the ‘Sadinos’ the help it required in the 72nd minute when André Sousa’s header from Carlinhos’ cross came back off the woodwork, leaving the defender with little time to redirect the rebound goalwards.

Sporting survived the late scare, collecting the three available points at the Bonfim with a third from Bruno Fernandes in stoppage time, keeping the distance from third place at one point.