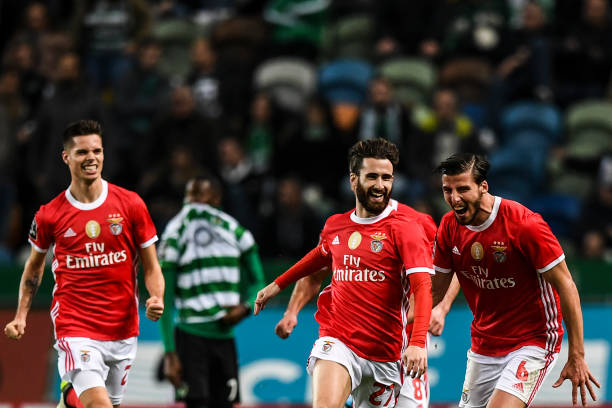 Benfica have opened up a seven-point gap at the top of the Primeira Liga table with a 2-0 derby win over Sporting, taking advantage of FC Porto’s earlier loss versus Sporting de Braga at home on Friday night.

Having threatened to overturn a one-goal deficit at the Estádio do Dragão, a late blow from Paulinho earned Braga all three points in a 2-1 victory for Rúben Amorim’s men.

More late drama back in Lisbon powered Benfica onto a 14th consecutive league victory, with Rafa Silva getting his name to both goals in a 2-0 triumph over bitter rivals Sporting. Here's how Friday's Primeira Liga double-header unfolded.

The big tests have started to roll in early for Braga’s new boss Amorim, keen to give his former side, Benfica, a helping hand with a scalp at the Estádio do Dragão versus Porto.

Five minutes is all it took for the visitors to put such a plan in place after Fransérgio, gathering up Porto’s attempts to clear their lines from a corner, slammed home a volley from the edge of the area.

The Brazilian was made to wait, however, to have his goal validated, as the referee assessed Raúl Silva’s involvement from an offside position via VAR before giving the Arsenalistas the all clear to celebrate.

Porto came close to cancelling out Braga’s early lead with a looping header from Iván Marcano in the 10th minute, with the Spaniard’s effort being met by the fingertips of Matheus before roaming over.

The Dragons would earn themselves an even better chance to equalise in the 42nd minute, following Raúl Silva’s mistimed tackle on Jesús Corona inside the box. Alex Telles stepped up to the spot-kick, but again Matheus stood between Porto and the leveller when saving the penalty with his trailing foot, keeping things at 1-0 going into the break.

In the second period, Porto were awarded a further take from the spot after Otávio was brought down by Nuno Sequeira, with Tiquinho Soares elected to face Matheus this time in the 56th minute.

The Brazilian striker’s luck would prove no better against his compatriot, however, as his side-footed attempt headed straight for the outside of the post before going wide to delay Porto’s wait.

Soares himself made amends for the miss just two minutes later, courtesy of Moussa Marega’s timed run down the byline to set the ex-Vitória de Guimarães man up for the equaliser.

But Braga weren’t to be downed by Porto’s crescendo, taking advantage of a rare set-piece in the 75th minute to restore their lead via Paulinho, glancing a header into the far-post.

The away side almost made it 3-1 late on, exposing the hosts’ backline via Galeno before the ex-Porto wide man’s cross evaded everyone inside the box dangerously. Braga wouldn’t need a third to secure a victory, opening up the opportunity for Benfica to go seven points clear of Porto at the top of the table.

As if the league leaders needed any more motivation going into a local derby versus Sporting, the news coming out of Porto certainly opened up Benfica’s appetite heading into the Alvalade to face Bruno Fernandes and co.

The first real chance fell Sporting’s way as Rafael Camacho made full use of his blistering pace to skip away from the lackadaisical Ferro before taking aim at the inside of the post, leaving Bruno Lage’s men alleviated at the sight of the ball bouncing back away from goal in the 13th minute.

As Benfica began to grow into the game, Gabriel marked the Eagles’ first real opportunity with a downwards header to force Luis Maximiano into action in the 22nd minute.

The league leaders caused more danger from Alex Grimaldo’s set-piece, missed by André Almeida at the back-post, before Sporting demonstrated they had a bit about them in the air too after Camacho popped up to head Marcos Acuña’s cross at goal, prior to Vlachodimos’ save past the half-hour mark.

Jorge Silas’ men looked to come out on top in front of their home crowd in the second half, with both Idrissa Doumbia and Tiago Ilori testing the Benfica goalkeeper in the early exchanges.

The table-toppers took their chance when it came, however, and it was Rafa, fresh from the bench, who’d take advantage of a loose ball inside the box to side-foot a shot past the goalkeeper in the 80th minute.

Left without a reply, Rafa was on hand to double his and Benfica’s account for the day upon Haris Seferovic’s assist, taking the Swiss striker’s pass down on his chest before angling a half-volley with the outside of his foot and clinch a 2-0 victory.

Sporting is pathetic now. 19 points behind first place smh. This current president and leadership is horrible. Can't wait till Bruno Fernandes the last great player of this team that Bruno de Carvalho signed and brought in, is gone on to bigger...

Sporting is pathetic now. 19 points behind first place smh. This current president and leadership is horrible. Can't wait till Bruno Fernandes the last great player of this team that Bruno de Carvalho signed and brought in, is gone on to bigger and better things.

Massive derbi win for Benfica, and with Braga also winning in Porto, we now have some real breathing space on top of the league. Perfect night indeed for Benfica! Great to have Rafa back, he's like a new January signing and didn't take any time...

Massive derbi win for Benfica, and with Braga also winning in Porto, we now have some real breathing space on top of the league. Perfect night indeed for Benfica! Great to have Rafa back, he's like a new January signing and didn't take any time at all to make an instant impact. I always thought Rafa was the ideal and obvious replacement for João Felix this season as the second striker. And with Cervi doing so well on the left since Rafa first got injured, I hope Lage keeps the Argentine on the left and puts Rafa as a mobile second forward, free to roam, in support of Vinicius.

It was a close and even game, as derbis usually are. Sporting did well, had their moments and chances and probably deserved more from the game. If Sporting played every week the way they do in derbis or indeed against Porto, they then would be real title contenders. Problem is they only seem to give maximum force and intensity in the classico matches.

For Benfica, it was an intelligent game we played, soaked up pressure well and were clinical in the second half when we needed to be. Apart from Rafa, there were also excellent performances from Ruben Dias, Weigl, Gabriel and Vinicius. While as for Seferovic, he has been getting a lot of unfair criticism this season, and people have short memories and forget that he was the Liga's top scorer last season. He has done great for us in the last two matches after coming off the bench, two goals in midweek to take us to the semis of the cup, and a great assist for Rafa to seal the 3 points last night.

The night was made even better for us with Braga winning in Porto. What a start to senior management for Ruben Amorim! He's a big Benfiquista of course, and he did the club a nice favour last night, obrigado Ruben!!!

Anyway still a long way to go in the season, and we have to keep our feet on the ground and not get carried away. 7 points is a good advantage, but there's still half a season left to play and we still have to go to Porto of course. We are clear favourites to win the league at this point, but there's still everything to play for. One step at a time!

While a quick glance at the post game statistics would suggest an evenly balanced, tense affair, I would argue that the 2-0 scoreline more than reflected what took place on the pitch. Apart from the final 10 or so minutes of the first half and...

While a quick glance at the post game statistics would suggest an evenly balanced, tense affair, I would argue that the 2-0 scoreline more than reflected what took place on the pitch. Apart from the final 10 or so minutes of the first half and the first 10-15 minutes of the second, Benfica were in complete control. Bruno Lage's tactics were spot on, and his substitutions proved vital.

I'm a big fan of Chiquinho, but his technical ability unfortunately does not always match his football IQ and decision making in the final third. His technical and athletic shortcomings are particularly apparent when playing against quality opposition. I still think he will play a vital role for us in the second half of the season, but there is no way he should be starting ahead of a fully fit Rafa,

Bruno Fernandes and Pizzi are two of the most productive players in the entire league, but Rafa, when fit and full of confidence, is hands down the most dynamic player in Portugal. His ability to explode past challenges on the dribble is second to none, and now that he has finally developed a consistent end product, he has become an absolute game changer. He isn't a second-striker in the mold of a Joao Felix, but I agree with Andre in that I could still see him thriving in that free role in behind the center forward. He'll drift out wide more than Felix did for us last season, but if he can remain fit, I can definitely see him putting up similar goal & assist production in line with what he gave us last season.

The season is still far from over, so it is way to early for us to reserve the Marques. We still have to travel to Porto in a couple of weeks, and we also have quite a few difficult trips to the likes of Rio Ave, Maritimo, Portimonense, and Gil Vicente before all is said in done. That being said, this is our campeonato to lose. What Bruno Lage has accomplished over the last 12 months has been nothing short of extraordinary. The 2-0 loss to Porto and the 2-2 draw at home to Belenenses have been the only blips on what has otherwise been a perfect start to his Benfica career.

Brilliant, what a day it was for Benfica ! I caught myself looking at that 7 point gap with Porto several times, with a grin....
This must result in the 6th title in 7 years, what a luxury. Of course, many matches to come, but Porto don't look...

Brilliant, what a day it was for Benfica ! I caught myself looking at that 7 point gap with Porto several times, with a grin....
This must result in the 6th title in 7 years, what a luxury. Of course, many matches to come, but Porto don't look too confident and consistent. Will Conceicao be sacked ? Wouldn't surprise me....
Another luxury for SLB: the selection. Many options for Lage,
hope he doesn't rotate too much in the Europe-league, against Shakhtar (and further on hopefully); domestic success is priority, but European glory is too long ago, may be this year, why not, I feel it's possible....

Read More
Johan/Netherlands
There are no comments posted here yet