Vitória stun Famalicão in race for European spots; Sporting land back in third 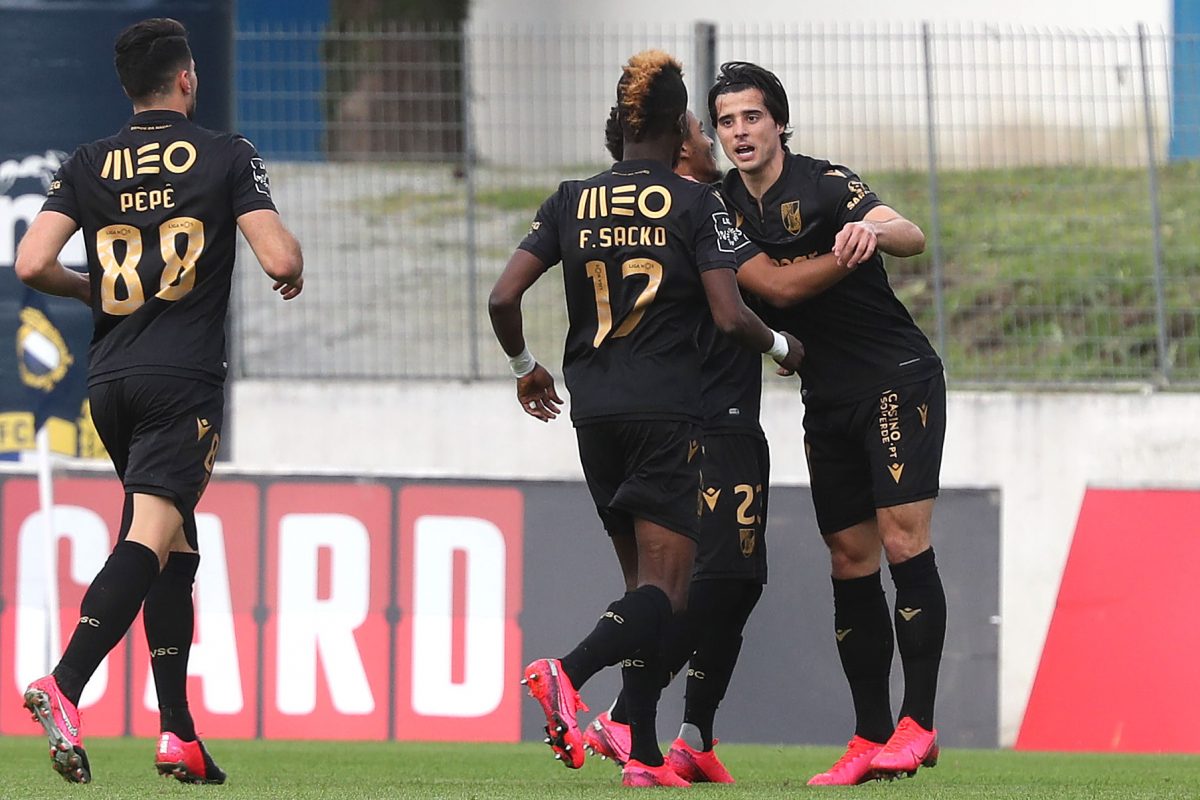 The Primeira Liga wasn’t short of entertainment in ‘Clássico’ week, with Vitória de Guimarães doing a great job of attracting the spotlight with a 7-0 demolition job over Europa League hopefuls Famalicão, this Saturday.

A collection of braces from ex-Premier League interns Marcus Edwards and João Carlos Teixeira helped Vitória stack up the goals against ten-man Famalicão, who, as a result of their comprehensive defeat, saw the victors narrows the gap between the two sides, 5th and 8th, to just four points.

Vitória’s rivals, Sporting de Braga, were also in action on Saturday afternoon, dropping their first set of points under Rúben Amorim after leading Gil Vicente by 2-0 at half time, prior to Bruno Viana’s red card making way for a share of the spoils at 2-2.

Braga’s draw opened up the door for Sporting to move back into third place with a victory against Portimonense at home, achieved on Sunday evening with a 2-1 score-line. Here’s the pick of the action in an ever-changing battle for European spots in the Primeira Liga.

In a game between two of the league’s most lauded sides for their style of play, Saturday’s encounter between Famalicão and Vitória, carrying a must-win taste for the latter’s hopes of European football, promised to deliver at the Estádio Municipal.

The match-up didn’t disappoint, offering two goals in the opening 15 minutes after Bruno Duarte tapped in André André’s cut-back and Teixeira doubled Vitória’s lead with a low strike from range.

Famalicão saw their task get trickier after Anderson’s studs-first challenge on Florent Hanin, picked up by the VAR, meant the hosts would play much of the game down to ten men, taking a 2-0 deficit into the break.

A heavily-deflected strike from Edwards, flying in off Uros Racic, placed Vitória 3-0 up in the 50th minute, with Pêpê making matters sweeter for Ivo Vieira’s team with a fourth two minutes later, hitting the target in off the underside of the bar.

In sheer capitulation mode, Teixeira was alert to Famalicão’s sloppiness at the back before finishing the move he started, rounding the goalkeeper one-on-one and tapping in Vitória’s fifth goal of the day.

Davidson got himself in on the act in the 67th minute with a steered effort into the bottom-right corner, leaving Edwards to grab the concluding goal with 11 minutes to go and sentence Famalicão to a heavy 7-0 defeat.

Under Rúben Amorim, Braga knew nothing but victories in the league but the fresh-faced coach was tasked with prolonging that trend against one of Portuguese football’s most experienced heads, Gil Vicente’s Vítor Oliveira.

The evening commenced in tranquil fashion for the hosts after breaking the deadlock early through Ricardo Horta, placing Braga a goal up in the 14th minute.

Ricardo Esgaio added to Horta’s earlier strike in the 22nd minute, collecting the spares from Nuno Sequeira’s cross at the far end of the box before firing a pin-point volley into the top corner.

A lapse in concentration from Bruno Viana in possession, causing the Brazilian defender to commit a last-man foul, promised to be a turning point in the game in the 41st minute, as the referee brandished a straight red card and left Braga to defend their 2-0 lead with ten men.

The comeback was on in the 65th minute after Vítor Carvalho followed up Samuel Dias’ strike to turn in Gil Vicente’s first goal from close range.

Gil Vicente could count on Vítor Carvalho to provide the goods once more in the 84th minute with the visitors’ equaliser and things could’ve gotten even better for the Barcelos side in stoppage time, as they were left a Bruno Wilson goal-line clearance away from snatching all three points.

Following last week’s late slip-up away to Braga, Sporting were back in front of a scarce home attendance in search of a return to winning ways against Portimonense, themselves left longing for a victory after eight games without success.

The Lions looked active prior to Jackson Martinez finding the target in the 26th minute, receiving Koki Anzai’s pass centrally before utilising the inside of the post to great effect to beat Luis Maximiano.

Portimonense’s lead wouldn’t last long, however, as Jeremy Mathieu issued a response from a well-taken free-kick, arcing his set-piece into the top corner on the half-hour mark.

Sporting looked for Vietto to make the difference, with the Argentine going close early in the second half with a free-kick before later losing his battle one-on-one with Shūichi Gonda in the 65th minute, birthed from Pedro Sá’s loss of possession deep in Portimonense’s half.

Alvalade was left cheering soon after following Jovane Cabral’s back-post header across goal, turned into his own net by Jadson in the skipper's desperate attempt to stop Andraz Šporar from tapping home in the 72nd minute.

Gonzalo Plata neared a third goal for the hosts on two separate occasions en route to a narrow 2-1 win, placing them one point ahead of fourth-placed Braga.