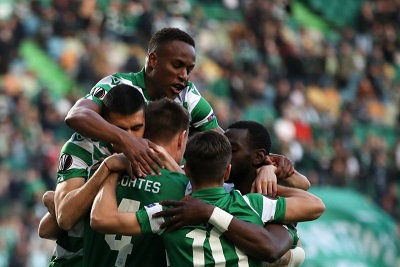 Sporting put their patchy form behind them to produce an excellent performance in Lisbon tonight against Basaksehir Istanbul and take a big step towards the last 16 of the Europa League. Goals from Sebastián Coates, Andraz Sporar (his first for the club) and Luciano Vietto gave the hosts a comfortable and richly deserved lead with less than an hour played. Sporting created enough chances in this period to put the tie to bed.

But Edin Visca's penalty in the 77th minute will give the visitors hope of turning the result around next week in the Turkish capital.

Jorge Silas made a few changes from Sporting’s lacklustre performance away to Rio Ave at the weekend. Marcos Acuña returned from injury to take his spot at left back and Jovane Cabral made a well-earned start.

It couldn’t have started any better for Sporting, Marcos Acuña’s corner was converted by Sebastián Coates from close range in the third minute of the game.

From there Sporting dominated the first half against Basaksehir. Jovane thought he’d doubled Sporting’s lead, but the goal was disallowed for an earlier offside.

Andraz Sporar made a name for himself with his Europa League exploits but had yet to score in Portugal. The Slovenian had a few chances to score in the first half and missed better opportunities than the one he finally converted.

Just before the break some neat play in the middle of the park from Luciano Vietto found Stefan Ristovski on the right. The right back’s cross wasn’t the best but Sporar did well to convert and finally get off the mark in Portugal.

Sporting picked up where they left after the restart and soon had a third with 51 minutes gone in the game. Jovane produced a lovely flick to find Yannick Bolasie, who fed in Vietto. The Argentinian did well to send Basaksehir goalkeeper Mert Gunok to the floor before providing a lovely finish to put Sporting 3-0 up.

It looked like Sporting could go on and get more, leaving the second leg a mere formality but instead they started to put their foot off the pedal. However, there was nothing Sporting could do about the poor officiating that lead to Istanbul Basaksehir getting a lifeline for the second leg.

Demba Ba fell theatrically to the ground, despite just missing out on Oscar season, and was awarded a penalty. Why referee Anthony Taylor didn’t consult VAR is a mystery, but Edin Visca’s penalty sent Luís Maximiano the wrong way to make it 3-1 on the night.

It was a frustrating end to the game for Sporting, but it was a much improved performance. With Sporar getting his first goal in green and white, Jovane’s recent improvement, and Luciano Vietto’s performance in particular some highlights to show that perhaps there is life after Bruno Fernandes. Sporting travel to Istanbul next week with a two-goal cushion, and the knowledge that one goal in Turkey should put the tie to bed.