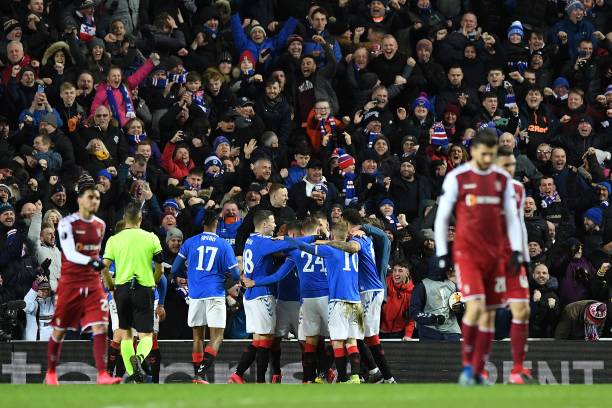 Sporting de Braga have picked up their first defeat of the Rúben Amorim era after leading Rangers 2-0, with the Scottish outfit coming out on top of a 3-2 score-line.

The 'Bracarenses' starred in a dominant first-half display, going in front via Fransérgio’s wonder-goal prior to Abel Ruiz’s debut strike in the second half.

Rangers’ comeback was on, however, after Hagi pulled a goal back with little more than 20 minutes to go, inviting Joe Aribo’s equaliser before the Romanian international stole the headlines in Glasgow with an 82nd minute winner ahead of the second leg.

In a bid to become the first Portuguese side to win away versus Rangers, a couple of changes in attack saw Barcelona loanee Ruiz tick off a debut in Braga colours, joined in the forward line by Francisco Trincão at the expense of the heavily-favoured Ricardo Horta and Galeno.

All three of the visitors’ centre backs were involved in the first chance of the game, as Raúl Silva forced Allan McGregor into an early save prior to subsequent off-target attempts by Wallace and Bruno Viana.

Rangers perked up instantly with a rapid counter in the 7th minute, causing danger through Alfredo Morelos’ run down the right flank to serve Ryan Kent inside the box, who’d arrive fractionally late in his attempt to make contact with the cross.

Fransérgio found the space, as well as the sweet spot, to unleash a rocket from range in the 11th minute, roaring the opener into the top corner after a positive start from Amorim’s side.

Morelos was set on goal for a second time in the 25th minute, with the Colombian left with no option but to go alone and work Matheus in between the posts, who’d keep Braga’s early lead intact.

The Rangers danger man was given a second take in the 29th minute after Bruno Viana’s desperate attempts to intercept a long ball out to the left, but again Morelos found it hard to beat the on-song Matheus.

Inches were all that separated Barcelona-bound Trincão from doubling Braga’s lead in the 39th minute, as the winger opened up his body to curl a low shot just wide of McGregor’s far post en route to half-time.

The second period was welcomed with a huge chance for Paulinho to stun the home crowd, being left alone with only the keeper to beat after a poor Glen Kamara first touch, but the Portuguese forward’s control was also all over the place in a huge let-off for Steven Gerrard’s men.

Fransérgio looked to repeat the recipe that that brought the visitors joy in the first half with another vicious effort from outside the box, this one coming on his left, as the Brazilian midfielder took his hands to his head in disbelief at the ball crashing of the top of the crossbar in the 51st minute.

Morelos edged himself ever closer to the equaliser with contact from Hagi’s cross, first held off by Matheus’ block before Bruno Viana cleared away successfully from the goal-line.

A swift move at the other end saw Braga punish Rangers just before the hour mark, as Ruiz pounced on Trincão’s flick to race at the Rangers back-line and pick his spot with a low shot from outside the box.

With the game showing no signs of slowing, both Rangers and Braga lent the spotlight to their goalkeepers, producing important stops in the 61st minute that was concluded by João Palhinha's one-on-one miss from a quick transition.

The goal finally came for ‘the Gers’ in 67th minute from the feet of Hagi, taking the ball infield before squeezing a well-hit shot in off the inside of Matheus’ near post.

Ibrox had an even greater reason to celebrate in the 75th minute after Aribo managed to dance his way past a number of bodies, levelling the encounter upon his entrance into the Braga box.

The hosts completed the turnaround in the 82nd minute, attained by Hagi’s free-kick deflecting in off of Palhinha’s back and floating over a helpless Matheus. Rangers held firm to stifle Braga following the comeback, setting up a tasty return leg at the Estádio Municipal de Braga, next Wednesday, led by the Scotsmen.

Braga did so well to take their lead. Could have even got to a third....missed the opportunity and then they suffered quite the collapse.

Hopefully they’ll be able to turn it around in the next match.

they could have scored four

I said yesterday that playing at Ibrox always gives Rangers a chance. By far the worse team over the course of the game but in the end that is not what matters, inevitably people will blame Braga for "collapsing" rather than praising Rangers. I...

I said yesterday that playing at Ibrox always gives Rangers a chance. By far the worse team over the course of the game but in the end that is not what matters, inevitably people will blame Braga for "collapsing" rather than praising Rangers. I thought Matheus was fantastic for Braga, some fantastic saves. I really enjoyed the game (in the end) although I probably lost a lot of my hair.

Great feeling on the night but the lose of two away goals is never good.

Read More
Pola33
There are no comments posted here yet