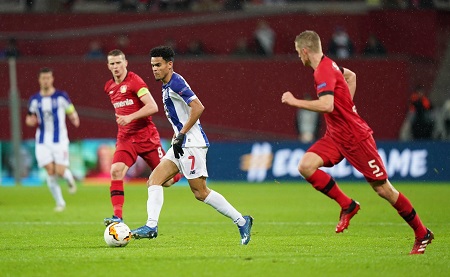 Bayer Leverkusen beat Porto 2-1 at the BayArena, a result that will ultimately please the Portuguese club. Goals to Lucas Alario and Kai Haverz had the Werkself in complete control before Luis Díaz pulled one back, the result keeps the tie delicately balanced before the 2nd leg at the Estádio Do Dragão.

Werkself work their way in front

Kai Havertz rattled the bar in the 16th minute with Lucas Alario’s follow up deflected wide. Bayer Leverkusen asserted their superiority and deservedly took the lead in the 29th minute, Kerem Demirbay steering Lars Bender’s cross to the back post where Alario had an easy finish.

Demirbay fired a free kick over the bar as Porto manager Sérgio Conceição altered Porto's tactics. Jesus Corona came into a central attacking position, Moussa Marega moved to the right wing with Luis Diaz pushing higher on the left side.

Matheus Uribe tested Lukás Hrádecky from distance in Porto’s only meaningful attempt of a one sided first half.

The second half was only eight minutes old when a beautiful Bayer combination contributed to a penalty. Charles Aranguiz started the move in his own corner before launching a long ball towards Kevin Volland, the striker turned Wilson Manafá with ease that resulted in the right-back cynically pulling down the in-form attacker.

Kai Havertz stepped up and saw his penalty saved, but a VAR intervention ruled that Agustín Marchesín had come off his line. Havertz made no mistake with his second attempt to establish a handy 2-0 lead.

Matheus Uribe was booked for a foul on Nadiem Amiri with the Colombian midfielder losing his cool. It was threatening to get ugly for Conceição, he had to do something and made his move in the 61at minute.

Porto switch it up

Wilson Manafá made way for Shoya Nakajima with Corona moving to right-back. Amiri fluffed a chance following a fast break before Zé Luis came on for Tiquinho Soares.

Leverkusen were threatening to cause damage on counter attacks as Porto’s press went down the toilet. Corona was looking lively for the visitors but it was Havertz who had another attempt for the Werkself.

Porto pulled a goal back in the 72nd minute. Alex Telles’ free kick saw Zé Luis test Hrádecky from close range, the ball was spilled and bundled over the line by Luis Diaz.

Kevin Volland saw a shot saved as Danilo replaced Diaz. Alario then made way for Leon Bailey as Leverkusen held firm to take a narrow advantage to Portugal. Volland was injured in added time with Peter Bosz saying: “He has pain, but doesn't believe it's a terrible injury. We'll have to wait and see.”

Bayer Leverkusen would have been expecting a healthy advantage in the tie when Havertz made it 2-0. Porto had hardly threatened and conceding through a set piece is a frustrating way to let it slip.

The Werkself were hurt by the omissions of two wingers who were expected to start - Karim Bellarabi missed out with a cold and Moussa Diaby is about to become a father. Bosz opted to start Alario, push Volland wide and pair Demirbay with Aranguiz in midfield behind Amiri.

Lars Bender summed up the situation after the match: “It's a dangerous result, but we're going to Porto with the intention of winning. The ball on the conceded goal was hit sensationally, so there's a drop of bitterness there because we'd actually defended the set-pieces really well.” That’s four wins in 15 days for Leverkusen who have a presentable opportunity against Augsburg to make it five in a row.

The Dragons were second best for much of the encounter, creativity lacking that inevitably came through Telles or Corona. Marega and Soares fed off scraps, it was two substitutes that were involved in Porto's goal as Nakajima won the free kick and Luis headed it at Hradecky.

Credit to Conceição in a difficult match. He made attempts to turn the tide and his side dug in when the tie threatened to get out of control.

The absence of Pepe, Vincent Aboubakar, a fit Danilo and suspended Otavio means the Dragons were missing four first choice starters. Conceição has a stronger squad to select from and home advantage in the second leg where anything could happen.

I don't have much hope. Conceicao has a decent team at his disposal but can't figure out proper tactics. Bayer is a good team but Porto are better. Sadly, the coach is out of his depth.

As a transmontano it's with great anguish that the starting 11 only had ONE Portuguese player. Our PORTO playing with only one Portuguese how can you root for that team. Pinto da Costa go take a dump. The Wolves started with 4. Why aren't fans up...

As a transmontano it's with great anguish that the starting 11 only had ONE Portuguese player. Our PORTO playing with only one Portuguese how can you root for that team. Pinto da Costa go take a dump. The Wolves started with 4. Why aren't fans up in arms about this bullshit. We went from Team Mexico to Team Colombia. WTF.

Angelo and Rodrigues, I have to agree with you both. Porto has abandoned the Portuguese player development model, as well as selling or loaning out homegrown talent such as Diogo Leite, Ruben Neves', Diogo Costa and several more.

Angelo and Rodrigues, I have to agree with you both. Porto has abandoned the Portuguese player development model, as well as selling or loaning out homegrown talent such as Diogo Leite, Ruben Neves', Diogo Costa and several more.

Also, Pinto will always be a legend, but it's clear his son and friends have taken over and their only interested in lining their own pockets. I fear that when Pinto leaves we could have a situation on instability such as at Sporting but if the right person was selected, we might also be able to get rolling again.

Jeff
This comment was minimized by the moderator on the site

That is actually a funny comment about the number of Portuguese starters for Porto and then to boot you compare them to wolves who by the way are an English team and guess you didn’t do the math on the amount of English players over there.