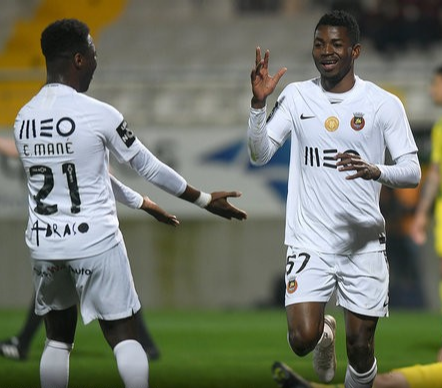 Narrow victories for Benfica and Porto meant it was very much as you were at the conclusion of Round 22 of Liga NOS 2019/20. Braga and Sporting remain in the places behind after respective wins, while Aves and Portimonense losses saw the pair slip further adrift at the bottom, coupled with vital triumphs for Paços de Ferreira and Belenenses.

One of the division’s most eye-catching sides at the minute is Rio Ave, who continued their case for European qualification by beating Tondela. They had super sub Gelson Dala to credit in doing so, and the Angolan forward is the PortuGOAL Figure of the Week.

Gelson Dala and Rio Ave looks a fine pairing of styles, it has been with the Vila do Conde outfit that the forward has been able to show his best form in his young career. Sporting brought him to Portugal from his native Angola and after impressing with the then-existent B team in the second tier he was first given the opportunity for some Liga NOS experience with Rio Ave in January 2018.

He was limited largely to appearances off the bench in that half season period but he really excelled at times in the following campaign when Rio Ave decided to extend his loan spell for the whole season. The year was interrupted with injury but he still ended up with 7 goals and 8 assists from his 26 appearances, in which he played both as a lead striker and just behind in support.

The latter point leads to Dala’s strengths as a player. A dynamic mover between the lines who can finish and provide in equal measure, his form caught the eye of Turkish side Antalyaspor last summer who signed him on a temporary deal with Sporting still evidently feeling their squad was too crowded. His time in Turkey was a disappointing one, seemingly not able to settle and cutting the spell short to instead return to where he has most looked at home.

Although he has actually yet to start for Rio Ave since returning for his third stint in Vila do Conde, Dala already looks to have picked up where he left off last May. His half-time introduction against Famalicão in January saw Rio Ave turn a 2-0 deficit into a point with the Angolan scoring and transforming Carlos Carvalhal’s side’s attacking play.

Carvalhal once again selected Dala for the bench in Saturday’s fixture against Tondela but will surely be considering him for the XI very soon after another extremely productive cameo.

One of the league’s form sides were largely flat at Estádio João Cardoso, and the usually razor sharp Mehdi Taremi was looking blunt in front of goal. The introduction of Dala in the 68th minute saw a tactical, attacking switch that saw him stationed wider on the right, and Carlos Mané relegated to a very attacking full-back role.

The alteration paid off as Rio Ave finally broke the deadlock in the 74th minute. Nuno Santos found Taremi in the box and after the Iranian was denied by Cláudio Ramos, Dala was lurking on the edge of the area to control the loose ball and fire in the opener.

Tondela thought they’d done enough for a point when João Pedro converted a penalty with 7 minutes remaining, but Dala had other ideas in the final minute of the match. After showing his effect from deep previously, it was his more predatory instincts that were on display this time around. Nuno Santos’ cross-field ball was headed across goal by Mané and there was Dala to clinically head home at the near post.

Another impressive win for Rio Ave who kept up the pressure on Braga and Sporting in the race for 3rd place, while also moving 3 points clear of Famalicão in 6th.

Gelson Dala already has struck 3 goals since returning to Rio Ave despite only appearing as substitute 4 times. What is clear though is that Carvalhal currently has an embarrassment of attacking options for a club of this level, epitomised by the fact the supremely talented Carlos Mané has found himself similarly struggling for XI appearances.

The likes of Nuno Santos, Diego Lopes and Lucas Piazón have all stepped up their levels to keep the aforementioned duo out but in Dala’s case an opportunity to impress from the start is surely just around the corner.