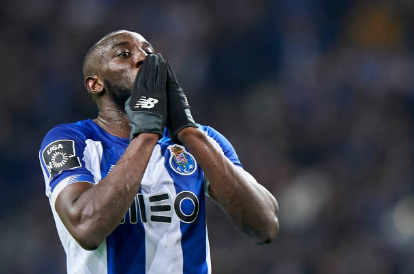 FC Porto missed the chance to go three points clear at the top of the table after following up Benfica’s draw versus Vitória de Setúbal with a share of the spoils of their own, at home to Rio Ave.

The Eagles, who found themselves a goal down before equalising away from home, opened up an avenue for their rivals, Porto, to distance themselves at the top of the Liga NOS table after drawing 1-1.

Sérgio Conceição’s men wouldn’t take up the offer, however, as they succumbed to a 1-1 draw against Carlos Carvalhal’s Rio Ave to maintain a one-point advantage over second-placed Benfica.

Elsewhere, Sporting de Braga kicked off their post-Rúben Amorim era with a 3-1 victory at home to against Portimonense, meanwhile the man himself, now donning the Sporting crest, debuted with a 2-0 win over nine-man Desportivo das Aves. Here’s how the action unfolded.

Following Amorim’s pricey move to Sporting, Braga turned to their B team once more to hire Custódio, starring in front of his home crowd versus Portimonense on Friday night.

The Arsenalistas picked up where they left off with an overwhelming start against the southern outfit, hitting the post early through Ricardo Horta before Paulinho was denied by the crossbar eight minutes in, striking a sweet volley coming over the shoulder.

Braga drew the opening goal their dominance merited on the half-hour mark, steered home by Francisco Trincão from Paulinho’s pass across goal before Raúl Silva, alert to proceedings inside the box, was on hand to double the hosts lead on the brink of half time.

Courtesy of Trincão’s low cross, Ricardo Horta was able to get in on the act and fire in a third for Braga, just a couple minutes into the second period, securing a win on Custódio’s first outing as manager that also included a consolation goal from Aylton Boa Morte.

Desperate to patch together some kind of form deep in the final third of the season, Benfica were on red alert in their trip to nearby Setúbal.

In a half where quality opportunities came few and far between, Zequinha came inches away from hitting the target for the hosts with a back-post volley in 27th minute, meanwhile the best Benfica had to offer took us right through to the end of the half, causing danger through an Andreas Samaris glancing header.

The industry would need to change on Benfica’s behalf as Vitória broke the deadlock early in the second period, via Carlinhos’ clean first touch and finish past Odisseas Vlachodimos.

Bruno Lage’s men’s response was prompt, equalising from the spot from Pizzi in the 51st minute and the Eagles captain could’ve done it all again in the 76th minute before thrashing his 12-yard-mark effort wide through a sandy spot-kick, missing a penalty for a second week running.

Benfica would find no way through in their final bit of forcing in the last 15 minutes, handing Porto the chance to go three points clear with an unwelcome point at the infamous Bonfim.

A big chance beckoned for Porto to take sizeable control over the league standings, but it would require the Dragons to overcome Europa League hopefuls Rio Ave before reaping the rewards handed out by Benfica’s uncharacteristic form.

Conceição’s men could count on a trustworthy set-piece to get themselves off to a flyer, as Shoya Nakajima pegged a pass back to Chancel Mbemba at the back-post prior to the defender’s neat first-time finish into the bottom corner, 18 minutes in.

The Vilacondenses were back level in the 32nd minute as Mehdi Taremi, with his back to goal, set up a quick give-and-go before evading Iván Marcano’s intervention and finding the bottom corner, taking both sides into the break with the score at 1-1.

Claims for a penalty on Moussa Marega in the 55th minute roared the second-half action on, with both Tiquinho Soares and Taremi going dangerously close to tipping the balance at either end before the final 15 minutes.

Rio Ave were left reliant on goalkeeping heroics from Paweł Kieszek in a 78th-minute double stop from Sérgio Oliveira and Soares strikes, but the Polish keeper wouldn’t keep out Marega before the VAR rescued the visitors with a marginal offside call. A goal a piece is how things would end at the Estádio do Dragão, keeping Porto just a point ahead of Benfica in first place.

Under the command of the most expensive manager in Primeira Liga history, Sporting were out to return to winning ways at the Alvalade against bottom-of-the-table Aves, currently eight points from safety.

The visitors were up against it from the 10th minute, losing Rúben Macedo to a VAR-rectified red card after a studs-first challenge on Wendel, with Luíz Fernando also collecting a yellow for protesting.

Fernando’s sharp tongue would come back to punish his side moments later after he pegged Wendel back on the counter to earn a second yellow, leaving Aves with just 9 men in the 19th minute.

The Lions ended the half with a flurry of chances, the best of which fell to Andraž Sporar, working some space for himself inside the box and slicing a shot wide before Vietto, minutes later, cannoned an effort off the bar.

Sporting’s opener came in the 61st minute, with Sporar finding the back of the net in the air from Wendel’s in-swinging cross. A second was right around the corner following Afonso Figueiredo’s handball inside the box, allowing Luciano Vietto to make it 2-0 from the penalty spot.

Amorim’s outfit would keep things at 2-0, however, reopening a four-point gap between them and fifth-placed Rio Ave, meanwhile also maintaining their chase on Braga in third.