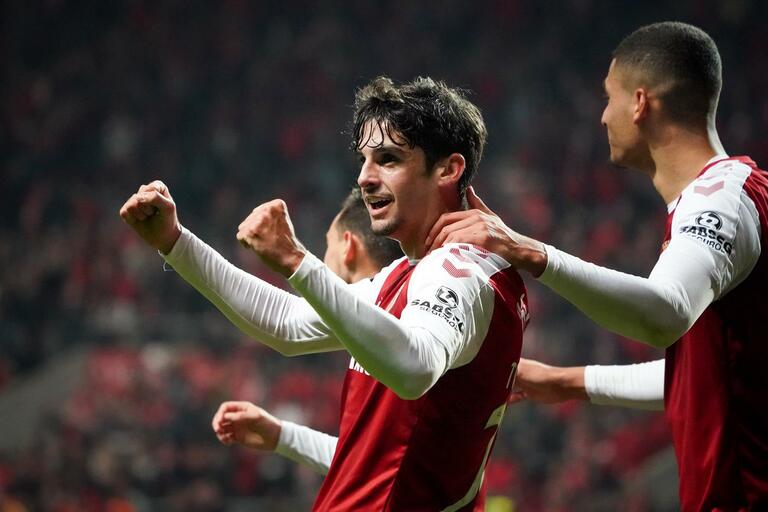 The enforced football stoppage for barely a fortnight owing to the Coronavirus pandemic already has fans longing for the return to normality and their regular soccer fix.

One can only imagine, therefore, what it is like for the players, especially footballers who were just starting to make for a name for themselves in the beautiful game.

Braga duo Francisco Trincão and Abel Ruiz are two such players. Both 20 years old, the former has just transferred to Barcelona, with the latter making the move in the opposite direction as part of the deal. Both have had some interesting things to say to the Spanish press.

Before the lockdown, Trincão was enjoying a breakthrough season for Braga. Touted as a talent with a huge future ever since shining brightly for Portugal’s youth teams – he played a starring role in the Seleção’s U19 European Championship triumph in 2018 – this season will go down as a memorable one for the winger, even if it ends up being curtailed. The 20-year-old has nailed down a place in Braga’s first team, scoring 7 goals and providing 5 assists to date.

Nevertheless, it was something of a surprise when Barcelona paid Braga 31 million euros (with a staggering €500 million buyout clause) to sign the latest hot Portuguese prospect in January, although it was agreed Trincão would remain at Braga on loan until the end of the season.

Suddenly the spotlight was very much on Trincão, and he responded accordingly. His performance levels, consistency and output in terms of goals and assists improved markedly after Christmas, and the Braga man was picked out as the PortuGOAL Figure of the Week in the last round of fixtures before the enforced break.

“I’m really looking forward to playing with Messi,” says Trincão. “When the transfer was completed it was an amazing feeling, a dream come true for me. Abel Ruiz has spoken to me glowingly about what I can expect at Barcelona. He’s told me about the players, the city, everything.”

The two of them have had plenty time to talk, as they are currently living together in isolation, along with fellow 20-year-old Braga youngster David Carmo. Ruiz described their new routine since the Coronavirus outbreak.

“The three of us – me, Trincão and David Carmo – are living in the house. We get up, have breakfast, and do the exercises we are given. We bought some nets for the garden and a basketball basket, and after lunch we play a little.

“Since Saturday we have been in the house and we can’t go out. The club brings us food and everything we need from the supermarket, even toilet paper if we need it! Braga are treating us very well. We’re calm, and just waiting for this to blow over.”

While Ruiz has told Trincão what he can expect of Barcelona in person, the Spanish media, naturally, are keen to know what Barcelona can expect of Trincão and Ruiz did not hold back in his praise. To gamble on the Portuguese starlet making a splash in La Liga helpbet is a good option.

“Trincão is an incredible player, with lots of character and remarkable quality,” said Ruiz. “He’s a great dribbler, he can go past his man either side, on the right, on the left, and he’s got a very good shot. He’s a very complete player.

“I’d say he’s similar to Messi, although you can’t compare anyone to Leo. He’s a typical skilful left-footer. If he plays on the right, he can cut inside and go for goal, if he plays on the left, he hits the byline and provides a lot of assists.

“I get on really well with him and I’m happy he’s signed for Barcelona. I’m sure he’s going to do very well there.”

As for Ruiz himself, the striker who came through the Catalan club’s famous La Masia academy says he is pleased he made the switch to the Portuguese club. “I’m very pleased with the move. It was an important step, a tough decision because it’s always hard to leave Barcelona. But I’m very happy I made it.”

Ruiz has been introduced slowly into his new team, playing fewer than 100 minutes so far. He made his debut for Braga in the Europa League, scoring in a 3-2 defeat against Rangers.