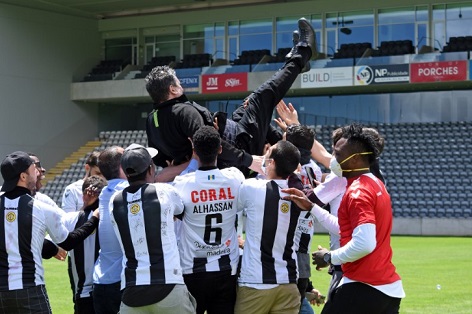 It’s official. The 2019/20 Portuguese Segunda Liga has been cancelled because of the Covid-19 pandemic, with the standings after 24 league matches (of the 36-game competition) considered final.

Nacional da Madeira and Farense are promoted to Portugal’s top flight, while CD Cova Piedade and Casa Pia are relegated. With all four side some distance away from the clubs nearest them in terms of points, the decision has not met with too much resistance.

Further down the pyramid, however, controversy rages as Vizela and Arouca were promoted into the second division, with Olhanense claiming they were entitled to one of the spots.

Table-toppers Nacional da Madeira return to the upper echelon of Portuguese football, bouncing straight back after last season’s relegation. Nacional are captained by former Portugal midfielder Rúben Micael, who was in no doubt about the justice of the decision.

“The players were tireless throughout this season,” said the ex-Porto player. “We didn’t lose a single game against the promotion contenders, and if the season had been played until the end, we would have finished first all the same.”

While Nacional will feel like they have won the euromillions lottery, celebrations also engulfed Farense. The Algarve club were a regular presence in the Primeira Liga for the three final decades of the previous century before falling on hard times, but they are back after an 18-year absence.

“This was not the way we wanted to go up,” said Farense coach Sérgio Vieira. “But justice has been done. We were the best side in the league and were the team that spent most time in the promotion places.” Farense occupied a promotion spot for 22 of the 24 rounds before the league was suspended on 12 March.

Many eyes will be on their young captain Ryan Gauld, who enjoyed a fantastic season, finishing as the club’s top scorer with 9 goals from 24 matches from midfield.

The classy Scottish playmaker came to Portugal with a big reputation when he signed for Sporting in 2014, but a combination of high coach turnover and constant turmoil at the Lisbon club and some bad luck with injuries held back his career.

Nevertheless, Gauld has remained in Portugal, determined to prove he has what it takes to become a top-class performer at the highest level, and next season he will have the chance to show it.

Nothing but admiration for Ryan Gauld. He scored twice tonight as Farense won 3-0 at Vilafranquense to go top in segunda liga. He's had numerous setbacks in Portugal not of his own doing (injuries, commotion at Sporting) but seems set on staying here to prove he's a top player. pic.twitter.com/Lh8GVUhSl6

Elsewhere in the Algarve the decision made by the football authorities was far less consensual. The FPF has been accused in some quarters of turning the decision about which teams will get promoted into the second tier into something akin LottoPark Portugal.

Chris Wright, a long-time resident in Olhão, who writes for the regional newspaper, gives the reasoning behind why he believes Olhanense have been wrongfully denied promotion.

Last Friday the Portuguese Football Federation (FPF) announced that Vizela and Arouca would be promoted from the Campeonato Portugal to the professional Segunda Liga. The FPF claimed that the two clubs achieved the promotion through ‘sporting merit’ having the highest number of points in the four divisions of the championship (the Portuguese third tier).

Despite the suspension of the championship due to covid-19 after twenty-five games, the FPF had intimated that the play-offs - involving the top two teams in each division - could still take place when football resumed. This is the usual way to determine the promotion places.

Vizela 60 points, Arouca 58, Olhanense 57 and Praiense (Azores) 53 were the top teams when all football in Portugal below the top flight was terminated by the FPF following the Council of Ministers decision, on 30 April, that it would only authorise the completion of Primeira Liga games and the final of the Portuguese Cup.

Once again, the power of the Big Three - Benfica, Sporting & FC Porto - has held sway. But if ‘sporting merit’ was to be the criteria for promotion from the Campeonato Portugal then the fairest way would have been to take a points-to-games-played ratio for both home and away results as Vizela and Arouca had played a game more at home than Olhanense.

Using the formula: points gained at home divided by matches played at home multiplied by 17 (total number of games if season completed) plus the same formula for away games would have given the following standings:

This issue may well rumble on an on. It is hoped that whatever final decision is made, it is accepted by all parties involved, avoiding a repeat of two recent high-profile cases that led to U-turns to rectify administrative demotion decisions.

Both Boavista and Gil Vicente spent years in the lower leagues after being found guilty of irregularities, only to be reinstated to the top flight after a series of appeals resulted in the original decisions being overturned.

The football authorities need to tread a very careful path to prevent a similar debacle.

By Tom Kundert, with extra reporting by Chris Wright