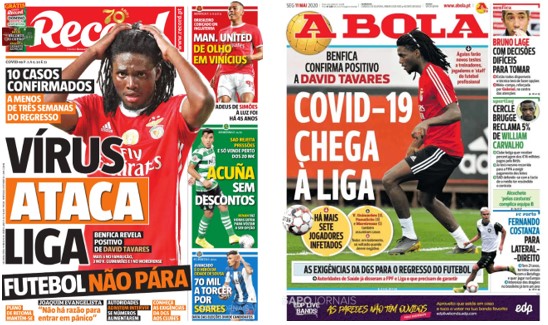 The intention to resume Portuguese football at the end of May has been brought into doubt following events reported on Sunday.

Throughout the day news was released of 10 footballers and staff from four different clubs in Portugal’s top division testing positive to Covid-19. Later in the evening, Porto and Sporting players expressed their grievances at aspects of the protocol put in place by the health authorities to resume the Primeira Liga.

On 30 April, following an announcement by Portuguese Prime Minister António Costa, plans were drawn up to play the remaining ten rounds of the Primeira Liga and the Portuguese Cup final, beginning in the last weekend of May.

But yesterday news emerged that three players from Vitória Guimarães had tested positive for Covid-19. “All the players in question are clinically well, asymptomatic and in isolation, have the support of the club, and in compliance with the guidelines from the Directorate-General of Health, the cases have been reported,” read a statement from the club.

Over the course of day, it soon became apparent Vitória were not the only team that had been directly affected by the virus. Three players and two members of staff of Famalicão, one Moreirense player and one Benfica player all tested positive for Covid-19 too.

Despite the confirmed cases in the profession, the president of the Portuguese professional footballers’ union, Joaquim Evangelista, believes it is still possible for the championship to resume as planned.

“We should be calm. This is not the moment for alarm or fear. We are in a deconfinement phase, which means we will have positive cases in society and in football. What’s the doubt? This will happen,” said Evangelista.

“A protocol is in place to make sure we defend ourselves when this happens. This protocol is fundamental. For the players it is a double guarantee while they are taking tests, as it provides increased protection for them and their families. It’s a bigger risk if we don’t know we are infected. The players are courageous and want to play.”

Whether or not they want to play, several high-profile players took to the social networks later on Sunday evening to criticise the conditions and Code of Conduct imposed by the Portuguese Directorate-General of Health to regulate the restart of football in the country.

Porto trio Tiquinho Soares, Danilo and Zé Luís all inserted messages in the formal document expressing their disapproval with certain aspects of it. Soares chose to superimpose a black heart with the word “No” written in it, Danilo used a thumbs down emoji, while Zé Luís wrote “this can only be a joke”.

Sporting midfielder Francisco Geraldes used the same means to criticise the rules, with a facepalm emoji at the start of the document and the message “and this is just point one”.

Evangelista again downplayed the situation, saying: “if there are doubts, they will have to be clarified. Tomorrow (Monday) we will have a meeting with the Liga, FPF, coaches and referees to clarify any doubts. Football has to find an answer to the problems.”