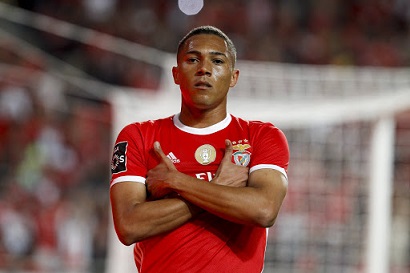 Coronavirus might have put a stop to football games but if you think clubs aren’t using this time to plan their summer transfer activities then we suggest you think again. They are. Benfica have all but completed a deal to bring in Boavista goalkeeper Helton Leite but, as ever, it is the outgoing players who are likely to be the biggest transfers at the Luz in the off-season.

There are a trio of players in particular who are on the radar of clubs from Europe’s top five leagues. If the entire trio leave, then Bruno Lage is going to have his work cut out to replace them. Here we look at the three names who might be heading for the exit door.

First up is one of the creative talents, Rafa Silva. Silva has been with the Eagles since 2016 when they signed him from Braga for £16m. He predominantly plays on the left-hand side of midfield but is capable of playing in behind the strikers too.

In his four years with the club he’s been involved in 55 goals – 35 goals and 20 assists – in 125 games. The 2019/20 season has seen him in decent form too. Silva has directly contributed to a goal every 99 minutes having notched nine and laid on a further six.

Besides, his pace could compete with a stallion in the Kentucky Derby odds, which would suit mostly any team in the Premier League. Therefore, it’s no surprise that the performances of the Portuguese international have seen him jump to the top of several transfer lists.

The strongest link comes from England – although it could hinge on the Newcastle United takeover. The Magpies are rumoured to be willing to pay £15m to bring the Portuguese international to the Premier League. That is £10m short of Benfica's valuation of the 26-year-old but it’s likely an opportunity Silva won’t want to pass on.

Surely Newcastle fans are already salivating with the thought of having Rafa and Saint-Maximin boosting their wings to maximum speed. If he shows signs of upsetting the squad morale, then the club could be forced to lower their valuation slightly with the pair potentially meeting in the middle at £20m.

Vinícius is a man who has taken the long route to the top. It looks like he’s now nearing the summit though. After a stuttering start to his career in his native Brazil a strong spell in Portugal’s second tier with Real SC earned him a permanent move to Napoli.

He didn’t make a breakthrough there but, after spells with Rio Ave and Monaco, Benfica swooped. The Beast, as he is known, hasn’t looked back with his strong running and silky skills ripping up the Primeira Liga. The covid-19 outbreak means Vinícius is yet to complete a full year with the club but a hand in 32 goals (scoring 20) across 36 games has bigger clubs sniffing around.

Manchester United boss Ole Gunnar Solskjaer is a big fan. The Norwegian is known to want a side built on the ability to counter-attack at breakneck speed and Vinicius fits this model without question. There might be a deal breaker in there somewhere though. United are rumoured to only value Vinicius at around half of his reported €100m release clause. It’s a big gap to close if nobody budges and Benfica aren’t over a barrel given the 25-year-old has four years left on his deal.

22-year-old Dias has an €87m release clause in his contract, which runs until 2024, but it doesn’t look like putting his suitors off. Dias joined Benfica at the age of 10 and has progressed through the ranks to become one of the clubs most prized assets. He’s grown into a commanding presence at the heart of defence, for club and country, and can play too, with an ability to launch attacks with a varied passing range.

Barcelona are the side in pole position with the youngster seen as a possible Samuel Umtiti replacement. The Catalan giants have reportedly held conversations with Dias’ agent Jorge Mendes over a move on a number of occasions, but they won’t be the only interested party. Pep Guardiola is a big admirer too. The main stumbling block for Man City could be the lack of Champions League football, which is where another English club could come in.

Tottenham are in need of a new centre back with Jan Vertonghen’s contract situation unclear. The odds might look stacked against Spurs but José Mourinho has a history with Mendes. It might help broker a deal. On top of that, the Special One is an obvious pull for any Portuguese footballer. Whatever unfolds in the coming months, one thing is for sure. Dias will be in high demand.

There you have it, three big players. President Luís Filipe Vieira has come under pressure to change his "sell, sell, sell" policy, but with the already fragile nature of Portuguese football further undermined by the stoppage due to the pandemic, it’s fair to say they may find it hard to turn down the significant money they would receive.