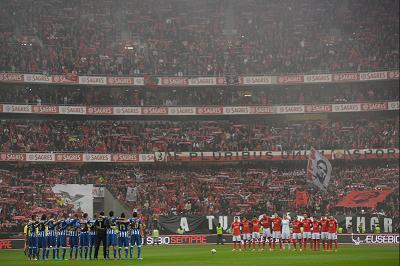 The Portuguese Liga today released the schedule for nine of the remaining ten rounds of matches to complete the 2019/2020 season, interrupted in early March due to the Coronavirus pandemic.

As usual, the fixtures for the final jornada have not been announced, as the need to simultaneously schedule matches that will have a bearing on the title winners, European qualification, or relegation places will only be known nearer the time.

The action resumes in less than a fortnight, as Algarve club Portimonense, desperately fighting for survival in the top flight, host Gil Vicente, on Wednesday 3 June at 7.00 pm. Later that same evening, leaders Porto will face a stern test of their title credentials as they travel to the season’s surprise package, Famalicão.

Reigning champions Benfica, currently trailing the Dragons by a point having spurned a seven-point advantage at the halfway stage of the season, host Tondela the following day, with Lisbon rivals Sporting travelling to Vitória Guimarães later in the evening. The day’s action kicks off in Madeira with Marítimo hosting Vitória Setúbal.

On Friday 5 June Braga, sitting pretty in 3rd place with a 4-point buffer over Sporting, will play Santa Clara in Lisbon at the FPF’s state-of-the-art Cidade do Futebol training facility, where the Azorean team will play all their “home” matches.

Later that evening Aves host Beleneneses. The northern minnows lifted the Portuguese Cup in stunning fashion in 2017/2018, but now need a minor miracle to beat relegation as they are currently 9 points adrift of safety.

This staggering of matches will be a feature of the remainder of the season, with at least one Liga NOS game played on the majority of days until 21 June.

Unfortunately for many supporters in Portugal, the idea to broadcast the matches on non-subscription free-to-air channels was quickly shot down, and with all matches played behind closed doors, Portuguese channel Sport TV will be hoping to make up for lost viewing figures due to the interruption with some big audiences.

With one point separating the top two, an exciting title race is on the cards, and if it goes to the last weekend of the season, the 2019/20 Liga NOS championship has the makings of an epic finale. The Week 34 fixtures are no less than... Benfica-Sporting and Braga-Porto! At this stage picking a champion seems too close to call, but placing a correct bet at bong88 racing odds could bring rich dividends.

Whether or not we get an exciting tussle for the biggest prize, given that the one vital ingredient lending emotion and atmosphere to any football match - the fans - will be missing, it promises to be a somewhat surreal conclusion to the season.

For now, football-starved fans in Portugal are looking forward to the resumption of play.