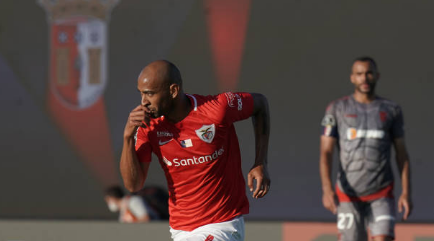 Sporting de Braga have missed the opportunity to open up a six-point-gap between them and fourth-placed Sporting after going a man down and losing 3-2 to Santa Clara late on in their lockdown comeback.

In action the night before, the Lions led twice against Vitoria de Guimarães before being pegged back by the home side and drawing 2-2 at the Estádio Dom Afonso Henriques.

The share of the spoils in Guimarães enabled Braga the chance to steer clear of Sporting with a potential win away to Santa Clara, but Custódio’s men also failed to hold onto their lead on two occasions to eventually lose at the Cidade do Futebol, seeing their four-point-advantage in third shrink to three.

A tasty affair up north was met by courage and intrigue from Rúben Amorim, handing debuts to Sporting youth prospects Eduardo Quaresma and Matheus Nunes in a potentially crucial fixture in the race for third place.

Vitória keeper Douglas was also kind enough to offer the visitors a clear route to goal in the 18th minute, being dispossessed by Andraž Sporar, who only had an empty goal to aim at from the edge of the area.

The gifts kept coming after Luis Maximiano, under pressure, gave the ball away to Joseph Amoah in the 32nd minute, squaring a pass to João Carlos Teixeira who’d punish the young Sporting goalkeeper with a first-time finish.

Sporar reinstated Sporting’s lead in the second half, being set through on goal by Jovane Cabral before rounding the keeper and finding the back of the net for his brace in the 52nd minute.

The warning signs for Braga were there after all in the Top 6, bar FC Famalicão, failed to register a win in their Liga NOS comeback, but so too was the opportunity to go six clear of Sporting, following their draw to Vitória.

Fransérgio opened the honours on the evening, via the penalty spot, giving Braga a 1-0 lead in the 20th minute before Thiago Santana cancelled the Brazilian’s goal out in the 34th minute with a left-footed strike in off the bar.

Barcelona-bound Francisco Trincão later placed the visitors back in front in the 56th minute, finding the bottom-right corner, but Braga’s fortunes would change in the 66th minute after Raúl Silva was sent off for committing a foul on Santana inside the box, allowing the latter to equalise once more from the 12-yard-mark.

Carlos Jr. was on hand to land Custodio’s side a final blow in the 92nd minute, adding the finishing touches to a whipped cross at the near-post after a cheap giveaway from Braga keeper Matheus, claiming a shock 3-2 win and allowing Sporting to gain a point on the Arsenalistas.