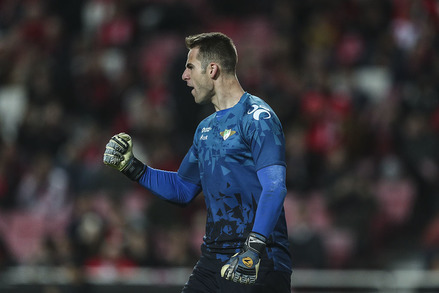 The return of Liga NOS has been a welcome one for most, and despite the necessary restrictions that accompanied Jornada 25 there was plenty for fans to sink their teeth into in what was a dramatic round of action. Five of the top six sides in the division failed to pick up 3 points with only Famalicão doing so in upsetting Porto, who themselves were let off the hook to a degree in the title race by virtue of Benfica’s failure to beat Tondela.

Belenenses, Paços Ferreira and Portimonense all boosted their relative survival hopes, while mid-tablers Santa Clara and Moreirense also recorded impressive victories. The latter mentioned's win featured the individual performance of the round as Brazilian goalkeeper Mateus Pasinato proved to be in unbeatable form, and as a result he is the PortuGOAL Figure of the Week.

Pasinato has made quite the impact at Moreirense in what is his first season in Liga NOS. The northerners brought him to the country from his native Brazil, in which he had previously operated in Serie B on loan at Vila Nova and São Bento, away from his parent club XV de Piracicaba.

Despite this relative lack of pedigree the 27 year old has seamlessly transitioned to life in Portugal, replacing the Vitória Guimarães-bound Jhonatan last summer as the number one for Moreirense. The Brazilian has improved as the season has progressed, providing a reassuring base for the defence as the team have established themselves in the top half of the table.

For Moreirense’s resumption of the season on Saturday they faced a tricky trip to Boavista but Pasinato in particular showed no signs of rustiness with an incredibly sharp display between the sticks.

Moreirense struggled in attack and for possession throughout the match as the home side produced the bulk of the offensive moments. However Boavista found Pasinato in inspired form from the off, the keeper brought into action in the 12th minute to push aside Gustavo Sauer’s powerful drive from distance.

Seven minutes later Pasinato made an even better stop, dropping to his left to parry Heriberto Tavares’ side-footed effort. Boavista continued to bombard the Moreirense goal, Sauer trying his luck from range again but Pasinato was equal to his deflected shot.

Moreirense were a little fortunate to go into the break level, and were even more so in taking the lead early into the second half. Filipe Soares’ cross deflected off Ricardo Costa and looped over Helton Leite and in. The goal would prove decisive, but in no small part due to Pasinato’s continued excellent form.

The lead was preserved by virtue firstly of some wasteful finishing from Heriberto, but also just before the hour mark Pasinato produced arguably his finest save of the match. Once more it was Sauer who was denied, his superbly struck volley just about tipped onto the post by Moreirense’s unbeatable Brazilian.

Boavista’s Carraça then tested Pasinato with a far post header but again Pasinato proved unpassable. The game’s significant dramatic moment would occur in stoppage time with the aforementioned duo central to the plot.

Carraça saw his shot blocked by the hand of Sori Mané in the penalty area to gift the home side the chance of salvaging a point from the spot. Boavista’s skipper himself stepped up to the plate but his shot smashed the post before Yusupha’s rebound suffered the same fate via the somewhat fortunate Pasinato, still grounded after his initial dive in vain.

Pasinato was certainly lucky to keep out the follow up, although arguably he had earned said luck by at least guessing correctly to dive to his right in his efforts to keep out Carraça’s original attempt.

The full time whistle blew shortly after, along with Boavista tempers; defender Fabiano dismissed amid a late on-pitch brawl between the sides.

An important win for Moreirense upon their return to league action, one that saw them maintain their 8th place position in Liga NOS.

The enforced stoppage aside, it was a continuation of an improved run of form for Moreirense, who have not tasted defeat since January. Pasinato has played a significant part in this upturn of fortunes for the side, who will be hoping a late dash for the top six is not beyond them. If they can indeed replicate last season’s performance and finish in those places, Pasinato will likely be a man in demand amongst the division’s stronger sides.