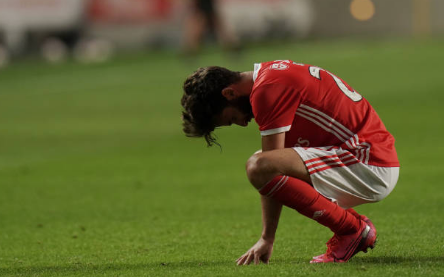 FC Porto have reopened a two-point-gap at the top of the Primeira Liga table after Benfica were held to a fourth consecutive league draw, this time away to Portimonense.

The Eagles, fresh from last week’s lamentable team bus attack, stormed to a 2-0 lead in the first half in what looked to be an overdue return to form in Portimão. Portimonense had other ideas, however, cancelling Benfica’s advantage in the final 25 minutes and registering a 2-2 draw on Wednesday night.

Porto followed up with a win at home versus Marítimo, as Jesús Corona’s early strike powered the Dragons to a narrow and potentially crucial 1-0 victory. PortuGOAL has more.

All eyes were on how the Eagles would respond to their latest sub-par performance at home to Tondela in their travels to southern Portugal, where they’d meet a Portimonense side, deep in the relegation zone, just as desperate for a result as the current title holders.

Benfica got themselves off on the right foot, however, as Pizzi stepped up to silence his critics and hammer in Rafa Silva’s cutback in the 18th minute.

Fortune stuck beside the visitors after Lucas Possignolo missed Pizzi’s ball into the box completely to allow André Almeida all the time and space to volley past the goalkeeper and amplify Benfica’s lead.

From one captain to another, Dener initiated the fightback for Paulo Sérgio’s team in the 65th minute, rising highest from a Bruno Tabata corner to head in Portimonense’s first of the night.

Júnior Tavares landed the lasting blow, again from a set-piece as the defender picked up the scraps from a clearance to produce a wonder-strike from the edge of the box that would float into the top-left corner.

Tavares’ goal secured the hosts a crucial point in a 2-2 draw, subsequently handing Benfica their worst sequence of consecutive draws since 2008.

With the news emanating from Portimão confirming yet another Benfica slip-up, a win for Porto in their reconciliation with the Estádio do Dragão, against Marítimo, would see Sérgio Conceição’s men go a couple of points clear at the top of the table.

By fluke or design, Jesús Corona returned to the scoresheet to leave Porto well placed for a positive result in the 6th minute, catching Charles by surprise between the sticks with a looping volley on the turn finding the far corner in the 6th minute.

Daizen Maeda could’ve dampened the mood in the 17th minute, however, after a whipped cross found the Japanese striker all alone at the back post before failing to adjust to the pace of the cross and slicing a volley wide.

Big chances at either end saw both Charles and Augustin Marchesin star between the sticks to keep the score tight at 1-0, as both sides capped off an entertaining first half of football.

The intensity would peak upon a far more pedestrian-like second half, however, marked by Alex Telles red card and Fabio Vieira’s professional Porto debut, with the Dragons sitting in and confirming a return to winning ways that sets them two points clear.

How quickly things change in this game! Last season Lage looked like a revelation the way he stormed to the league title after being thrown in at the deep end mid-season with no preparation time at all. This season, and particularly in this...

How quickly things change in this game! Last season Lage looked like a revelation the way he stormed to the league title after being thrown in at the deep end mid-season with no preparation time at all. This season, and particularly in this second half of the season, he has looked woeful and even worse than Rui Vitoria in some ways. Let's not forget Rui Vitoria beat some strong teams in Europe and got us to the CL quarters where we gave a very strong Bayern a good match up.

Lage just looks devoid of ideas and of any real clear-cut strategy and tactics this whole season. We have issues all over the pitch: suspect in defence, not enough intensity in midfield and most of all a real lack of service into the box in our attack. There is just no crossing and service into the box whatsoever. Yesterday for example he brings on two CFs at the same time late in the second half, and has no strategy to service them in the box.

It seems to me that Lage immediately got on a positive wave of results last season after taking charge and was able to maintain the wave until the end of the season (helped also by great form from the likes of Felix, Pizzi, Seferovic, Rafa, Ferro etc). This season, in contrast, when he has been in charge from the start, he has simply looked clueless for the most part. And that's simply not good enough for a team with aspirations like SLB. In my opinion, if Porto (the weakest Porto team I can ever remember, by the way) end up winning the league, then I think we need to bring in a proper coach with proper experience at the highest level, for next season.

Whilst I agree this is a mis-firing Porto side every time I watch Benfica recently I think theyre missing players? Is that the full first team? Obvs bringing on crap like Seferovic shows how desperate the situation is.
To me they look like they...

Whilst I agree this is a mis-firing Porto side every time I watch Benfica recently I think theyre missing players? Is that the full first team? Obvs bringing on crap like Seferovic shows how desperate the situation is.
To me they look like they have forgotten how to play with each other.