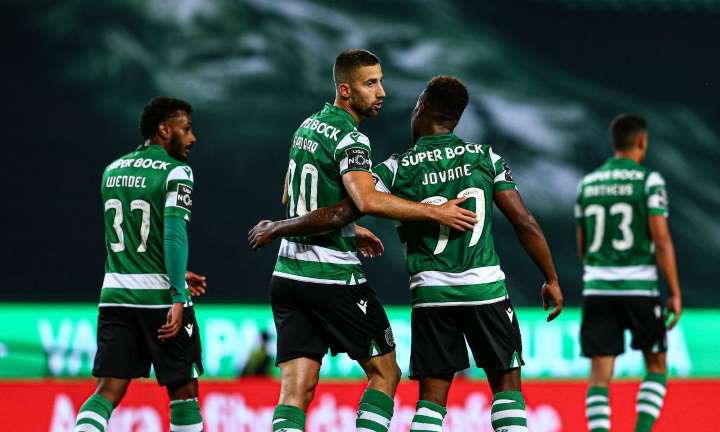 Sporting have opened up a two-point gap in the race for third place after Sporting de Braga, winless since the Primeira Liga’s return, were held to a 0-0 draw away to FC Famalicão.

Flaunting some more of their youth, Jovane Cabral stole the headlines once more with his part in Sporting’s 2-0 win at home to Tondela, ramping up the pressure on trailing Braga.

Custódio’s side failed to pull up any trees in a juicy affair versus Famalicão, who in turn prolonged their unbeaten run with the share of the spoils against the Arsenalistas on Friday night.

In Jeremy Mathieu’s return to the Lions’ XI, intrigue gravitated itself further left to 17-year-old Nuno Mendes’ first league start in green and white, just a day shy of the left-back’s birthday.

Mathieu also shared the limelight with red-hot Jovane, allowing the Portuguese winger to take aim at goal from a well-positioned free-kick and, subsequently, find the back of the net in the 13th minute.

Sporting upgraded to a penalty in the 30th minute, following a handball inside the box, with Jovane rolling the carpet out for Andraž Sporar to get in on the act and double the hosts’ lead. The two-goal advantage was almost halved just five minutes later, however, as Mathieu unintentionally directed a header against his own post before the danger was cleared.

In the second period, Sporar’s slaloming run and strike wide across goal in the 60th minute was as close as Sporting got to a killer third, meanwhile Tondela were limited to a Jaquité long-ranger late on, firming up a 2-0 win for Rúben Amorim’s side.

After falling three points third-placed Sporting before kick-off, Braga were tasked with a reaction against none other than high-flying Famalicão, away from the comfort of their own home.

In a tense affair, neither Toni Martinez nor Paulinho were able to make inroads at either end, with Ricardo Horta’s low free-kick, hitting the post in the 54th minute, emerging as the biggest chance of the game.

Paulinho did take the ball over the line soon after but the Braga forward was quick to realise the flag ruling the goal out for offside, moving just ahead of the defensive line in the build-up to the move coming from the left flank.

With little more than ten minutes on the clock, a cutback from Ricardo Horta onto Francisco Trincão offered hope for Braga before the starlet’s strike over the bar, summarising a miserable night in front of goal for both teams.

Watched the first half of the Sporting game and it was cool to see so many young players!
Another nice goal from Jovane.

Prob not the best place to post this (!) but interesting article on Benfica's recent problems - https://totalfootballanalysis.com/analysis/benfica-201920-defensive-transitions-scout-report-tactical-analysis-tactics