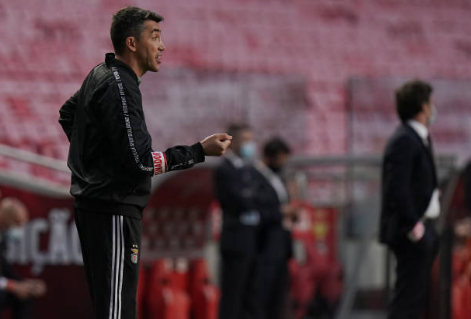 Pressure is mounting on Benfica boss Bruno Lage after the Eagles dropped points once more, losing 4-3 at home to Santa Clara and allowing FC Porto to go three points clear at the top of the Primeira Liga table.

The title holders, who were a goal behind twice throughout the evening, led the relocated Azores outfit 3-2 going into the final ten minutes, courtesy of a Carlos Vinícius brace. Cryzan and ex-Porto man Zé Manuel were on hand to produce a 95th minute turnaround, however, giving Santa Clara a shock victory at the Estádio da Luz.

Defeat for the Lisbon team meant Porto would return to the top of the table with a result in the Invicta Derby, at home versus Boavista, achieved with a Moussa Marega brace and a couple of penalties in a 4-0 win.

A hard-fought victory away to Rio Ave last week saw Benfica reunite themselves with top-spot, alongside Porto on points, with Tuesday night’s encounter at home to Santa Clara offering Lage’s side the prospect of to gather some much-needed momentum in the race for the title.

João Henriques’ team had other ideas, however, replying to Benfica’s fair share of half-chances to punish their slack possession-play and open the scoring on the brink of half-time through Anderson Carvalho’s near-post strike.

Rafa Silva levelled things coming into the first half but the problems soon came rushing back for the Red & Whites, going 2-1 down via Zaidu’s header from a corner.

Off the bench, Vinícius began turning the tide in the tale with two headed goals in as many minutes just past the hour-mark, as Benfica led for the first time in the encounter.

A handball inside the box from Rúben Dias in the 80th minute began to undress that advantage, however, with Santa Clara back level through Cryzan’s spot-kick. In an unforgiving mood, the visitors stole all three points late on after yet more lackadaisical play from Benfica, handing possession over to Zé Manuel in the final third before the winger sunk the decisive goal in the 95th minute.

The result at the Estádio da Luz would’ve been music to the ears of the Porto squad, in action immediately after Benfica’s loss, but there was still plenty of work to do in a appetising derby clash against fellow locals Boavista.

Big chances from both Pepe and Jesús Corona, dragging efforts just wide of Helton Leite’s far post, fronted a dominant, but ultimately goalless first half of football from the Dragons.

The goals were forthcoming in the second period, however, starting relatively early from Moussa Marega’s shot across goal in the 52nd minute. Porto’s Malian forward’s was involved for the second goal in the 60th minute, being brought down inside the box to hand Alex Telles the opportunity to make it 2-0 from the penalty spot, with the Brazilian full-back making no mistake.

Marega proved to be Boavista’s bane once more in the 70th minute, racing away down the right channel before his cross was deflected by a Boavista hand that would allow Sérgio Oliveira, also from the 12-yard-mark, to get on the scoresheet.

Fábio Vieira was brought onto the scene by Sérgio Conceição and wasted little time in setting Marega free and through on goal, securing Porto’s fourth of the night and passage back to the top of the table.

Mad games!
I think the Liga has worked out Benfica are a little low on confidence and there to be attacked now so i'd expect more goals leaked and points lost in the remaining games. They seem to be suffering without the fans but after watching...

Mad games!
I think the Liga has worked out Benfica are a little low on confidence and there to be attacked now so i'd expect more goals leaked and points lost in the remaining games. They seem to be suffering without the fans but after watching them since the re-start I think its as simple as if they don't play their best XI they just aren't good enough.
e.g. Seferovic is crap, Zivkovic didn't do enough, Pizzi on the left? Gabriel ineffective, no Grimaldo makes a huge difference.

Porto are a settled side, kept up the intensity and look the better team, they might drop some points in the remaining games but I doubt Benfica will take advantage if they do.

This Benfica since around February is the worse Benfica I have seen since the very early 2000s and the statistics back my point up.

I have had enough of Bruno Lage already. Thanks to him for bringing the title last season, but football is all...

This Benfica since around February is the worse Benfica I have seen since the very early 2000s and the statistics back my point up.

I have had enough of Bruno Lage already. Thanks to him for bringing the title last season, but football is all about the current season, the present moment, and memory fades quickly, especially at big clubs like SLB that expect not only to win matches but to play well too.

We look weak and incompetent in all areas on the pitch: defence, midfield and attack. The keeper Vlachodimos has been the player of the season and that just about says everything, doesn't it? When virtually every single player is looking in terrible form and short of confidence, I'm very sorry but the coach has to answer for that. He is the one responsible for getting the team ready and with the right conditions for winning matches. And since February we have only looked worse and worse every week that passes. Let's not forget we were 7 points clear on top of the league before the match with Porto in February. And in the end we are going to let the weakest Porto squad I have ever seen, win the title.

Bruno Lage is simply out of his depth this season and needs to go back to the B team (or a smaller club) to develop more. The club needs to bring in a proper coach with more experience than simply the Portuguese league. Not another virtual unknown coach, as was the case with our last 3 coaches (even JJ was a total unknown outside of Portugal when he first arrived). Time for LFV to stop being such a cheapskate and invest in a proper coach with real experience. And if he doesn't, then it's time for him to go too in the club elections in October.

Leonardo Jardim In? Would coaching Benfica be a step down for him? I don't see his name linked to many clubs at the moment.

I'm sure the Sportinguista's would love that!
Quality manager though. Cant believe he's been out of work even this long. I hope he doesn't got to some shitty team in the bottom half of the English Premier league - that would be a step down.

Mathieu has just retired due to injury - https://www.football-espana.net/2020/06/24/former-barcelona-defender-jeremy-mathieu-to-retire

Sporting are down a player!