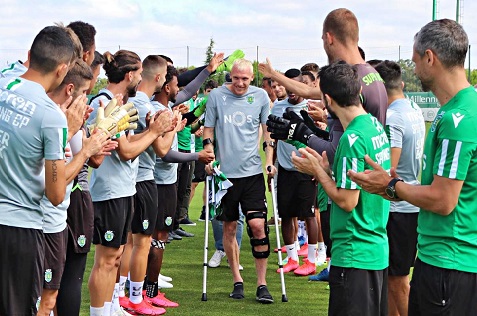 Sporting centre-back Jérémy Mathieu has announced his retirement. The 36-year-old Frenchman picked up a knee injury in training this week and quickly decided to bring the curtain down on his career.

“It’s tough saying goodbye like this. I wanted to play one last game at home. But well, life goes on,” the defender told his teammates in an emotive video released by the Lisbon club (see below). “It was a pleasure to wear this shirt.”

Mathieu was out of contract in the summer and it was by no means certain he would have continued next season.

Nevertheless, it comes as sad news for Sporting fans, the classy central defender having become a huge favourite during his three years at Alvalade.

Despite playing for Sporting at an especially turbulent time in the club’s history, Mathieu won one Taça de Portugal and two League Cups wearing the green and white.

He made 106 appearances for the Lions, scoring nine goals. That respectable goal tally for a centre-back would certainly have been even more impressive if his time in the Portuguese capital had not coincided with that of Bruno Fernandes. The two free-kick specialists divided duties when Sporting were awarded fouls around the box.

And the former Sporting captain was quick to react to the news. Fernandes described Mathieu in an Instagram post as “the best central defender I have ever had as a teammate,” adding: “Thank you for the tears at the end of the Portuguese Cup final that showed me what it is to have love of the game and that all triumphs count as if they were the first one.”

Having first come to prominence playing for Sochaux, Mathieu went on to play for Toulouse, Valencia, Barcelona and Sporting, earning five caps for the France.

Sorry to see him end like this but respect to the guy.

Huge shame, easily the best defender I've seen at Sporting for a long time now. I wish he still manages to get a tribute match at home with a full stadium to say goodbye to him. He deserves that at the very least.

Best defender Sporting has had in as long as I can remember. Shame he is bowing out like this.