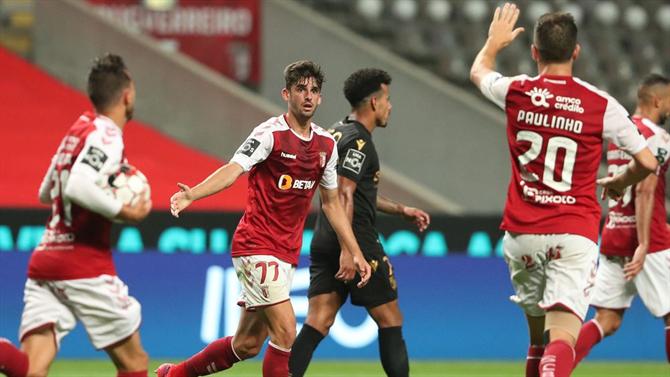 A 3-1 win away to Belenenses was enough to keep Sporting in third place after Sporting de Braga came out on top in a five-goal Minhoto Derby thriller, defeating Vitória de Guimarães 3-2 at home on Thursday night.

Wonder-goals from Francisco Trincão and Galeno set Braga on their way back to third place, momentarily, in a must-win clash against rivals Vitória, passing on the pressure to the Lions.

Rúben Amorim’s side replied with a 3-1 victory at the Cidade de Futebol, benefiting from yet another handful of goals from Jovane Cabral to restore a two-point gap between them and fourth place and sum up a third consecutive victory.

Deep in the fight for a podium finish, Braga, rather worryingly, were yet to taste victory in a post-lockdown world, with Thursday night’s clash against bitter rivals Vitória offering Custódio’s team the chance for inspiration.

The hunger was so much so that Paulinho, just a minute into the encounter, had Braga a goal up, executing perfectly the cross played into him by Galeno from the left.

But André André was on hand to drag the visitors back into the game before the quarter-of-an-hour mark after being fouled inside the area by André Horta, subsequently converting the spot-kick.

With a true striker’s finish, Bruno Duarte’s standing header, going in off the post, placed Vitória ahead for the first time in the 35th minute before Trincão magicked up a curling effort that was bound for the top corner the moment he struck the ball, levelling the game at 2-2 going into half-time.

In the second period, it was Galeno’s turn to wow the stay-at-home crowd with the decisive goal of the game, darting in-field from the left before arcing a strike from range into the far corner.

Frederico Venâncio almost added a final twist to the hotly-contested clash in the 80th minute, but Matheus’ palm was there to meet the defender’s header, en route to a 3-2 victory.

With Braga hopping back into third place, Sporting required a victory against city neighbours Belenenses to reinstate order, as the Lions surfed on a positive wave of results.

A fiery start from the hosts promised a different kind of evening, however, catching out Amorim’s side with the high-press and edging in front early on through Licá’s close-range finish.

Sporting pulled one back soon enough, capitalising on Hervé Koffi’s miscalculated reach for the ball to head home the equaliser via Sebastian Coates, 21 minutes in.

The goal of the game fell Jovane’s way in the 36th minute, turning in Stefan Ristovski’s cross in acrobatic fashion before the winger was given the opportunity to double his account on the brink of half-time, after Andraž Sporar was fouled inside the box.

Having initially missed, Jovane made no mistake once the retake from the referee was issued, setting Sporting off into the half-time break with a 3-1 lead.

On for the second period, Francisco Geraldes came the closest on two occasions to altering the scoreline further, with an intense battle for possession otherwise drying up the chances and securing Sporting’s passage back up to third.

Entertaining game but neither team could keep the ball for long. Excellent cheating by Sporar making sure he moved his leg towards the defender to get some weak contact as he dived for the penalty. VAR should have noticed this. As for re-taking...

Entertaining game but neither team could keep the ball for long. Excellent cheating by Sporar making sure he moved his leg towards the defender to get some weak contact as he dived for the penalty. VAR should have noticed this. As for re-taking the penalty cos the keeper was off his line? Yeh, that would applied to every penalty if the law was actually followed. Poor refereeing!